[Editor’s note: The following material was supplied to us by Dr. Richard Lindzen as an example of how research that counters climate-change alarm receives special treatment in the scientific publication process as compared with results that reinforce the consensus view. In this case, Lindzen’s submission to the Proceedings of the National Academy of Sciences was subjected to unusual procedures and eventually rejected (in a rare move), only to be accepted for publication in the Asian Pacific Journal of Atmospheric Sciences.
I, too, have firsthand knowledge about receiving special treatment. Ross McKitrick has documented similar experiences, as have John Christy and David Douglass and Roy Spencer, and I am sure others. The unfortunate side-effect of this differential treatment is that a self-generating consensus slows the forward progress of scientific knowledge—a situation well-described by Thomas Kuhn is his book The Structure of Scientific Revolutions.

The New Guard of Climate Questioners: Get Ready for the Next Round of Climate Science Debate

Last Wednesday, November 17, 2010, the Subcommittee on Energy & Environment of the Committee on Science and Technology of the U. S. House of Representatives held a hearing on climate change titled “A Rational Discussion of Climate Change: the Science, the Evidence, the Response.” In a clear deference to the incoming make-up of the House, there were a relatively high number of panelists that were invited by the sitting minority, which made this hearing more “rational” and fascinating that than most subcommittee hearings in some time.

The first two are stalwarts of the let’s-just-hold-on-a-minute view of catastrophic anthropogenic global warming. And, true to form, at the hearing each presented compelling evidence as to why anthropogenic greenhouse gas emissions might not rapidly push up global temperature—not now, nor in the future.…

“The Great Climate Debate” at Rice University: The Science is NOT Settled (Richard Lindzen and Gerald North to Revisit the IPCC ‘Consensus’)

On Wednesday evening January 27th a discussion of the latest developments in climate change science will be held on the campus of Rice University (directions below for those nearby). This discussion/debate is cosponsored by the Shell Center for Sustainability and the Center for the Study of Environment and Society at Rice. Here is the flyer: 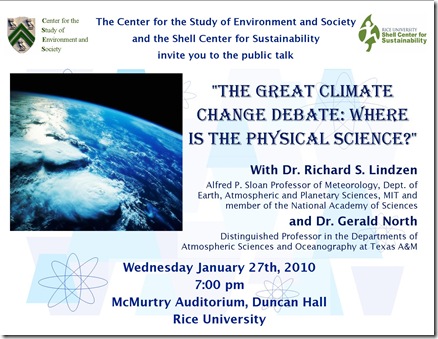 Defending the IPCC consensus regarding natural-versus-anthropogenic climate change is Gerald R. North, Distinguished Professor of the Physical Section, Department of Atmospheric Sciences and the Department of Oceanography at Texas A&M University.

Richard S. Lindzen, the Alfred P. Sloan Professor of Meteorology at the Massachusetts of Technology, will challenge the IPCC consensus, arguing that real-world climate sensitivity lies below the iconic range of 2c–4.5C. Questions about ‘Climategate’ and the newly emerged  ‘Himalayangate’ (the latter exposed by Dr.…

Is Texas Governor Perry Off Climate Base? (Groupthink vs. Science Revisited)

Kerry-Boxer: Its Bite is Worse than its Bark

What Does the Last Decade Tell Us about Global Warming? (Hint: the ‘skeptics’ have the momentum)

Is the Climate Science Debate Over? No, It’s Just Getting Very Interesting (with welcome news for mankind)