Is Texas Governor Perry Off Climate Base? (Groupthink vs. Science Revisited)

On October 16, 2009, the Houston Chronicle ran an Outlook piece by Dr. Ronald Sass— a fellow in global climate change at the Baker Institute and Professor of Natural Sciences emeritus at Rice University–complaining that Texas governor Rick Perry was getting his ideas about climate change from unreliable sources. Apparently, that Governor Perry is not hopping on the climate alarmism/policy activism bandwagon has Dr. Sass a bit concerned. Make no mistake about a political agenda of the giver of this advice that goes far beyond natural science issues.

Dr. Sass argues that the latest findings of the Intergovernmental Panel on Climate Change (IPCC) should be the end all and be all of the physical science debate. But he is behind the times. The IPCC report is several years old, and the latest theory and empirical data is pointing in more benign directions than at the height of the climate alarm in the late 1990s. Perhaps the governor’s stance isn’t as off-base as Sass would like his Chronicle’s readers to believe.

Dr. Sass does make some good points about the science, but he attributes too much import to the implications of setting the Governor straight on them.

For instance, Dr. Sass, points out, and rightly so, that human activities—primarily the burning of fossil fuels for energy—have contributed to the build-up of the atmospheric concentration of carbon dioxide and an enhancement of the earth’s natural greenhouse effect. If Governor Perry is being advised otherwise, he is getting bad advice.

And Dr. Sass is correct that an enhanced greenhouse effect will lead, in general, to a modified, and warmer, climate. Again, if the governor is getting advised differently,  he is being misinformed.

The Rest of the Story

However, from here Sass goes astray.

It is not true that just because humans are modifying the climate that this will lead to a bad outcome and thus we should undertake immediate efforts to stop this (which is what Sass would like the Governor to do). Consider that humans have been altering our climate ever since we first moved into a cave and started a fire to warm ourselves. In fact, it is highly probably that without our climate modifications that 6.5 billion of us would not currently inhabit the earth.

Not only are climate modifications necessary for us to live in the diverse places on the earth that we now inhabit, but perhaps more importantly, they allow us to practice high density agriculture where it would otherwise be impossible.  About half of all U.S. agriculture comes from the 16% of harvested cropland that is irrigated. In China, over 40% of cropland is irrigated, in India, about one-quarter. In Egypt, virtually all cropland is irrigated. In other words, we have made it rain when, and where, it doesn’t rain enough to grow highly productive crops.  The vast majority of us have human climate modification to thank for the food on our table.

So clearly, the very act of modifying the climate doesn’t mean it is inherently wrong. But many folks don’t seem to grasp this.

For instance, a recent opinion poll conducted by the Pew Center for the People and the Press on the topic of climate change attitudes, found that even though there has apparently been a decline during the past year or so in the percentage of Americans who think that there is solid evidence that the earth is warming because of human activities (from 47% in April 2008 down to 36% in October 2009), virtually everyone (97%) of these people think this represents a serious problem.

Compare this to the 65% of people who think that warming represents a serious problem even if the warming is caused by natural cycles.

This indicates to me that while two-thirds of people in general think that a warming climate is bad, virtually everyone who thinks that humans are behind it, think it is bad. 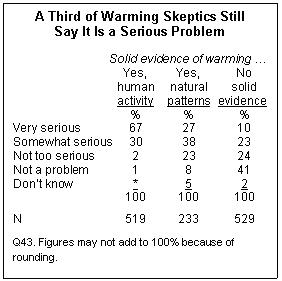 (source: Pew Center for the People and the Press)

So, maybe I am missing the obvious. Maybe it is not the human alteration of the climate that has people worried, but that it is a climate warming that has folks concerned.

This, too, is somewhat hard for me to get my head around.

Consider this. Many people go to great lengths to get out of a bad situation. It seems to be human nature to choose the unknown over the known when the known is very bad. We read about this type of thing everyday in the local paper and usually the tone of the article is one of hope—something like “while the future may be unclear and even rocky, there is no doubt that is going to be better than the past situation.”

That is, except when the issue is climate change. Then the idea somehow gets reversed.

The current issue of the Proceedings of the National Academy of Sciences, contains an article by a team of researchers led by Yarrow Axford of the University of Colorado, that concludes that human activities have been, at least in part, responsible for reversing the course of climate change from one of a naturally induced, long-term cooling to one of recent warming. The cooling trend that we helped to offset was more or less ongoing for the past 6,000 years or so, and was expected to last for a few more centuries, if not longer—possibly leading us down into a  period of ice age conditions (Axford et al. are not alone in their ideas that human activity has offset a naturally cooling climate, see for example, Ruddiman et al., 2005).

I say “Thank Goodness for that!” as should anyone else who is concerned about the human condition.

Cool times are typically not-so-good times for society. And they are the norm—at least during the past half-million years or so.  During the past 500,000 years, probably 90% of the time has been spent in an ice age.  And there is no way that an ice age climate can support 6.5 billion people (we’d probably even struggle mightily in a climate just a few degrees cooler than today). Food production would be severely compromised—probably the reason that modern society has evolved during an interglacial warm period. 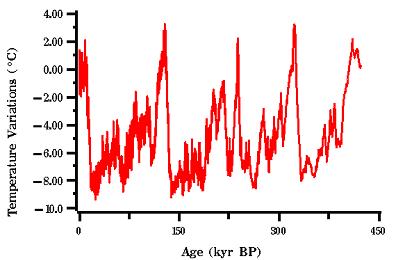 So, given a choice of where the earth’s climate may be heading, as compared to where it naturally would be heading, I’d take the former over the latter any day.

You would think I wouldn’t be alone here.  Especially given our internal migration patterns that show folks leaving cold regions and heading to warmer ones. 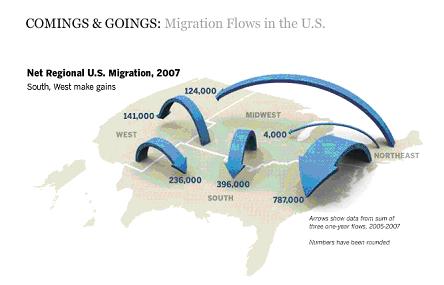 So I am not quite sure as to what is driving the numbers in the Pew responses.

The other option, I guess, is a complete take-over of the earth’s climate—one that is controlled either by large-scale human activity planning (e.g., national/international restrictions on the kind of energy we can use) or by climate-control centers (e.g., geo-engineering solutions such as carbon capture or solar reflectors). For these options to be palatable, I suppose we have to hope 1) we actually succeed in getting control over the global climate and make it behave as we want it, and 2) that people living in all countries agree as to what the best thermostat setting is for planet as a whole—neither of which seem all that probable.

And finally, I had mentioned that Sass and the IPCC were behind the times—no more evidently so then when it comes to the most recent findings concerning the magnitude of future warming. I addressed this is a recent posting  in which I detailed the just-published findings of Richard Lindzen and Yong-Sang Choi that the earth’s “climate sensitivity”—how much the earth will warm as greenhouse gas concentrations increase—is generally being overestimated. Lindzen and Choi’s research add to a growing body of scientific evidence that climate models are missing the mark when it comes to producing accurate projections of our climatic future—it is becoming increasing clear that they are predicting that the climate will warm up too fast.  And since model temperature change projections are too high, so too are the projections of the associated impacts.

What this means is that while Governor Perry may be ill-informed as to what effect humans are having on the climate, he is not out of step with the conclusions of the latest science as what effect we may have on the climate, or whether this effect will be a net positive or negative for Texas, the U.S., or the world as a whole.

Yes, humans are affecting the earth’s greenhouse effect and thereby the earth’s climate (after all the two are interconnected), but no, these impacts do not mean that all manner of bad things are certain to befall us and that therefore we should immediately ease up on our use of fossil fuels for energy production. Climate science and common sense argue otherwise.