Lindzen and Choi’s findings should come as a solace to those folks who are alarmed about future climate and as a bulwark to those folks fighting to limit Congresses negative impact on U.S. energy supplies and our economy. Indeed, climate sensitivity to GHGs is the multi-billion dollar question in climate science. If climate sensitivity is low, then the earth’s temperature doesn’t react very much to variations in processes which impact it—such things as solar variations, volcanic eruptions, cloudcover fluctuations or changes in the concentration of greenhouse gases.

Climate sensitivity is hotly debated because we have don’t have a good enough handle on the magnitude of the earth’s past temperature changes and an even worse understanding on the magnitude of the variation of climate drivers. So while theoretically evaluating the climate sensitivity is as easy as dividing the temperature change by the forcing change, in practice, a poor understanding of both the numerator and the denominator have made it virtually impossible to pin down.

IPCC Estimatation and the ‘Wild Card’ of Clouds

In its 2007 Fourth Assessment Report (AR4), the IPCC claims that the climate sensitivity to a doubling of atmospheric greenhouse gas concentrations likely falls in the range of 2.0°C to 4.5°C. This is based on a combination of studies, some making determinations based on historical data, others basing their results on climate model output.

But again, the problem with the former is an observational record that is not accurate enough to make a reliable calculation; the problem with the latter is that the physical processes simulated by climate models are limited both by our less-than-perfect understanding of these processes as well as by modern-day computation power (which limits the temporal and spatial resolution of the climate simulation).

The latest findings to this effect by Lindzen and Choi add to the work that Roy Spencer and several other researchers have been doing for years in this arena. Instead of a climate sensitivity lying within the IPCC’s range of 2.0° to 4.5°C, Lindzen and Choi report it to be about 0.5°C—six times less than the IPCC’s “best estimate” of 3.0°C.

Lindzen and Choi make their determination by examining radiation data measured by instruments carried by satellites orbiting above the earth’s atmosphere and comparing the variation of incoming and outgoing radiation with the variations in the earth’s tropical ocean temperatures. Climate models seem to predict that when the ocean temperature increases, less radiation leaves the earth to space, which leads to additional warming—a positive feedback. 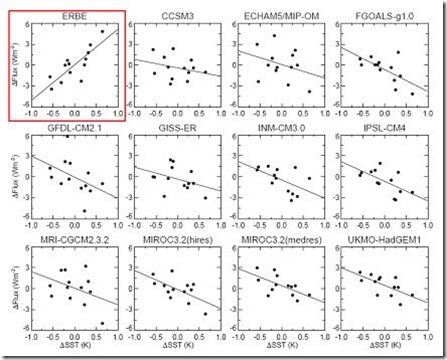 Figure 1. The observed relationship between ocean temperature changes (x-axis) and radiation flux to space (y-axis) is contained in the graph with the red box around it. The other graphs depict the relationship as predicted by 11 different climate models (adapted from Lindzen and Choi, 2009).

This is a major paper. And as with most findings with serious repercussions to our scientific understanding, it will doubtlessly be gone over with a fine-toothed comb and subject to various challenges. It is too early to tell whether Lindzen and Choi’s findings will prove to be the end-all be-all in this debate. There are a few issues concerning the quality of the satellite data, how well the results from tropics represent the entire world, the impact that the eruption of Mt Pinatubo may have imparted on the results, and perhaps a couple of other details. But, even if the resolution of these issues bumps up Lindzen and Choi’s original determination of the climate sensitivity a bit, there is still a long way to go before it comes close to the IPCC’s “best estimate” of 3.0°C.

Lindzen and Choi findings could fundamentally shift the climate debate, especially when they are considered along side of the growing number of scientific publications (see references below) that have reached the same general conclusion—that the climate model determinations of the earth’s climate sensitivity are too large.

No longer can low sensitivity estimates be brushed away as some silly notion dreamed up by climate change naysayers; instead, they must be taken seriously, especially in light of the earth’s recent recalcitrance to warm at the rate projected by climate models for the early 21st century.

These results should factor prominently in any discussions aimed at trying to limit projected future warming by reducing greenhouse gas emissions as they make a strong case that such actions would be a waste of time and effort.

Lindzen, R. S., and Y-S. (2009) On the determination of climate feedbacks from ERBE data, Geophysical Research Letters, in press.