Unfortunately, unrealistic representations of wind and solar are alive and well in many publications. Even if mathematically correct, their ability to reflect reality should always be carefully assessed.

These are like maps that show only a few major features, such as coastlines, mountains, large rivers, and major roads, leaving out the likes of non-fordable smaller rivers, marshes, ravines, and steep slopes or cliffs.

Signs to watch out for:

In the January 2017 issue of Power magazine, the lead article in the Global Review (titled “IEA: Coal Boom is Over”) provides an opportunity to illustrate this. The title will be taken by the reader as the main message, and it sets the stage for the graphics displayed: “1. A generation shift” that deals with capacities, and “2. Global generation by fuel and demand.” These are the focus of this post series. Part I will address the first, and Part II the second.

The underlying document, an International Energy Agency (IEA) paper (the recent World Energy Outlook) is available only at a considerable price, so this review is based only on what is available in Power magazine itself.

The first chart, Figure 1 below, is re-created from the figure “A generation shift” in the magazine article. It apparently indicates that renewables (hydro, wind, solar, and biomass) show a trend toward dominating global electricity-generation capacity by 2040, and presumably beyond. 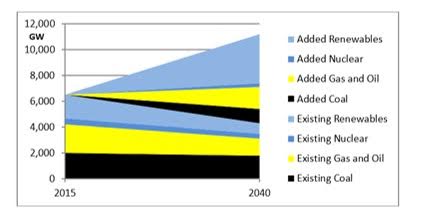 Note that all renewables (hydro, wind, solar, and biomass) have been grouped together, which conceals important aspects. Combined wind and solar are shown separately in Figure 2 for further analysis. 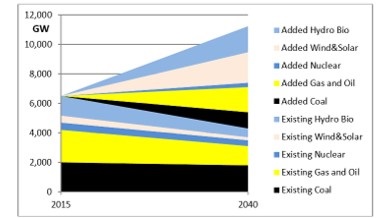 Figure 3 shows the effect of reducing wind and solar capacities to that which can be expected over time based on the natural energy flows of wind and solar. This is typically about 25% of total capacity. This production is not controllable by system operators, as is capacity use for hydro (with exceptions such as some run-of-river installations), coal, gas and nuclear plants. So, to start on the path of a proper basis of comparison, wind and solar must be discounted by about 75%.[3] This is shown in Figure 3. 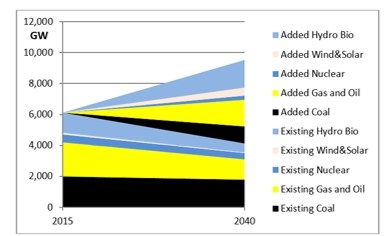 Figure 3 – Reducing wind and solar capacities to 25% of maximum due to nature-dictated capacity factor.

On some occasions, and on a short-term basis, wind and solar will generate a much higher percent of their installed capacities. This is often claimed as a major contribution to the grid, whereas in fact it represents a problem to grid management. In many cases, such production will likely be curtailed or dumped to another jurisdiction at a considerable discount.

This is still not sufficient to make proper comparisons, because beyond the above considerations, when called upon by system operators, there may be no electricity production capability from wind and solar at that time.

The relevant measure is ‘capacity credit’, which is a measure of the reliability of contributing to supply at any point in time, and is especially critical (and measured) at peak demand periods. This is important to overall electricity system reliability. More information can be seen in a European Wind Energy Association (EWEA) document.[4]

The capacity credit for non-dispatchable technologies is very low and decreases as their penetration into the electricity system increases. It starts at about the same level as the capacity factor at extremely low penetrations and exponentially falls to below 10 percent and approaches zero as penetration increases. Figure 3 shows the resulting reliable capacity values using 10 percent, which is generous.

The capacity credit for the other technologies approaches 100 percent except for scheduled and unscheduled maintenance. 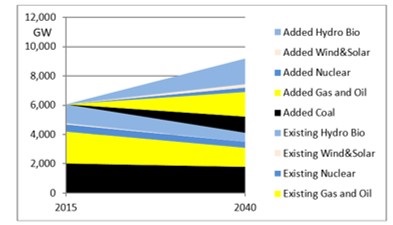 Figure 4 now allows comparisons to be made, and wind and solar play very minor roles compared to dispatchable generation technologies. The relative comparisons between technologies will be summarized below in Table 1.

Note the considerable reduction in “real” capacity in 2040 from about 11,000 GW to about 9,000 GW. Another way to look at this is that wind and solar represent a duplication of generation capacity compared to that required to reliably meet demand as shown in the next section.

How do electricity systems accommodate the nature of wind and solar? They do this by having redundant capacity almost equalling the renewable capacities as shown in Figures 5 and 6 for two jurisdictions that have heavily invested in wind and solar – Germany and Ontario, Canada. 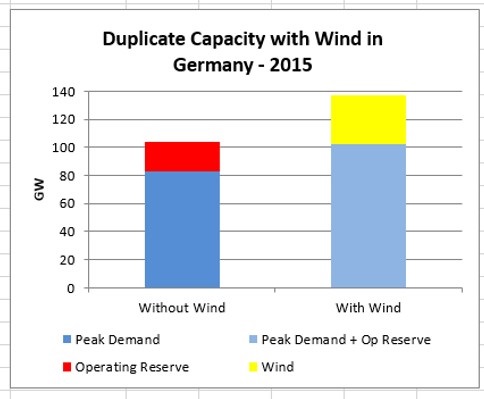 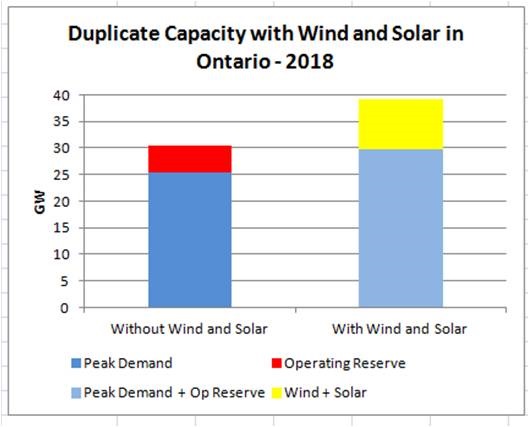 In both figures, the left-hand columns are peak demand requirements and include all the dispatchable capacity that is required to reliably meet demand and provide operating reserve. In the right-hand columns, if you look very carefully, you can see the capacity credit for wind by the slight reduction in “Peak Demand + Op Reserve.” In summary, when wind and solar are added, the other generation plants are not displaced, and, relative to requirements, wind and solar are virtually all duplicate capacity.

Summary of Installed Capacities in 2040

The Power magazine article does not directly show the total installed capacities by fuel type in 2040. Table 1 does this based on the above realistic determinations of the real value of the capacities.

All renewables still show an increase as a percentage of the total, but coal and gas each have more capacity installed in 2040 than all renewables (adjusted for capacity credit).  In terms of actual increases in absolute values, the capacity increases for these three are similar.

Although coal and gas are less as a percentage of the total, the absolute levels have increased notably. Part II will look at the actual electricity produced, which is a step towards a better measure for comparisons than installed capacity, especially in illustrating the relative need for the various fuels.

Coal capacity still represents a significant growth over 2015, although it is slightly reduced as a percentage. This hardly warrants the dramatic terminology in the title of the Power magazine article, and the chart used in support.

Duplicate capacities of fossil fuel generation plants are necessary when industrial-scale wind and solar are present in electricity systems.

Nuclear is an under-used resource to provide a capability to reduce the use of fossil fuels.

[1] Oil plays an increasingly insignificant role in electricity generation and this category will often be referred to as ‘natural gas’ or simply ‘gas’.

[2] See DOE/EIA document http://www.eia.gov/outlooks/aeo/pdf/electricity_generation.pdf. Note comments in the second paragraph on pages 2 and 4, and that wind and solar are shown separately in the following tables.

[3] Other generation technologies are taken to be 100% as the full capacity is available as required by the electricity system operator, except for scheduled and unscheduled maintenance. It is acknowledged that wind and solar Capacity Factors may improve for new builds over time. Solar is the most likely to experience technology improvements. Wind is a very old mechanical conversion process that can be improved slightly with larger and taller wind turbines. Countering any improvements, indications are that wind turbines will degrade notably within the realistic 15-20 year lifetime as explained here.

[4] See https://www.scribd.com/document/283089522/Large-Scale-Integration-of-Wind-Energy-in-the-European-Power-Sypply-A-EWEA-Report, on pages 122–24. This should be read carefully. To transfer the x-axis in Figure 34 to another jurisdiction, it must be converted to wind penetration percentage.

[5] The Long Term Energy Plan (LTEP) is produced by the Ontario Power Authority, which has just recently been merged with the system operator (IESO). The LTEP is not as easily accessible there, except for a brochure-like summary. The information shown is from the LTEP Cost of Electricity Service 2013 LTEP: Module 4, which I had previously saved.