Editor note: Mr. Hawkins’ study is presented to increase the interest in this highly important,  politically sensitive issue of incremental pollution from firming up industrial wind power. This post has been joined by Parts II-V, with Part V providing updates to the calculator and links to the other posts.

This analysis finds that natural gas used as wind back-up in place of baseload or intermediate gas (in the absence of wind) results in approximately the same gas burn and an increase in related emissions, including CO2. Extrapolating from this example to the whole, the working hypothesis is that intermittent wind (and solar) are not effective CO2 mitigation strategies because of inefficiencies introduced by fast-ramping (inefficient) operation of gas turbines for firming otherwise intermittent and thus non-usable power.

In the absence of extensive real-time load dispatch analyses at finely grained time intervals capable of accurately and sufficiently assessing all the variables affecting electricity system behavior as wind energy penetration increases, I propose a method – a calculator – that captures a wide range of considerations. I am unaware of any previous attempt that is as inclusive as what I present here and welcome reader comments for improvements on the present framework or alternative approaches.

This model, or calculator, provides a framework for the considerations involved and an interim assessment of their effects until sufficiently comprehensive studies can be performed in the areas indicated. It shows the impact on fossil fuel consumption and CO2 emissions compared to typical claims by wind proponents and other bodies, including some government policy makers. As it is parameter driven, the calculator allows examination of the sensitivity of these considerations. The result is that the typical claims are not supported, except by ignoring most of the following considerations:

The framework used is similar to that of Warren Katzenstein and Jay Apt (see citations below). It focuses on the wind/gas plant combination and has general applicability. Additional considerations involving wind’s impact on other electricity system elements particular to a specific jurisdiction, such as baseload capacity as analyzed by Campbell, will have to be assessed separately and could have implications that further offset wind’s claimed benefits.

Table 1 provides basic information on the wind and gas plants for the results contained in Figures 1 and 2. 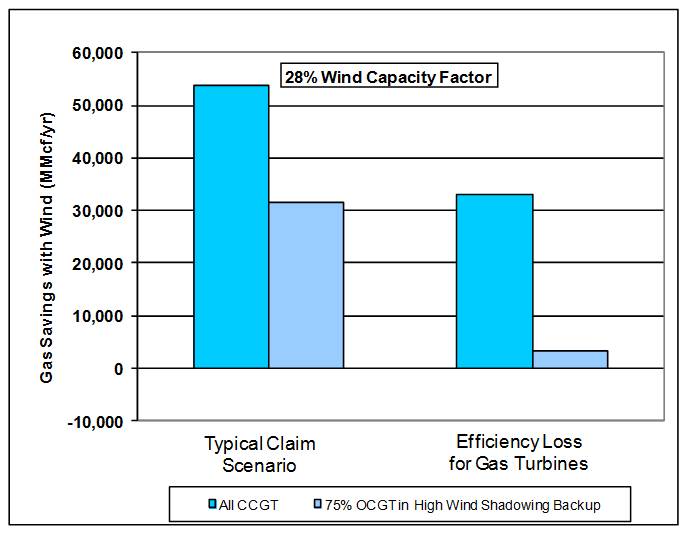 Figure 2 displays the results for CO2 emissions savings. The “Typical Claim Scenario” shows annual savings of about 3 million tons of CO2 ignoring any OCGT considerations and any effect of heat rate penalties or the related CO2 emissions increase factor. Introducing OCGT within this scenario cuts the savings by more than one-half. Using the inefficiency factors and only CCGT shows that the CO2 savings are reduced by about one-third, but introducing OCGT drives the CO2 savings into the negative category. 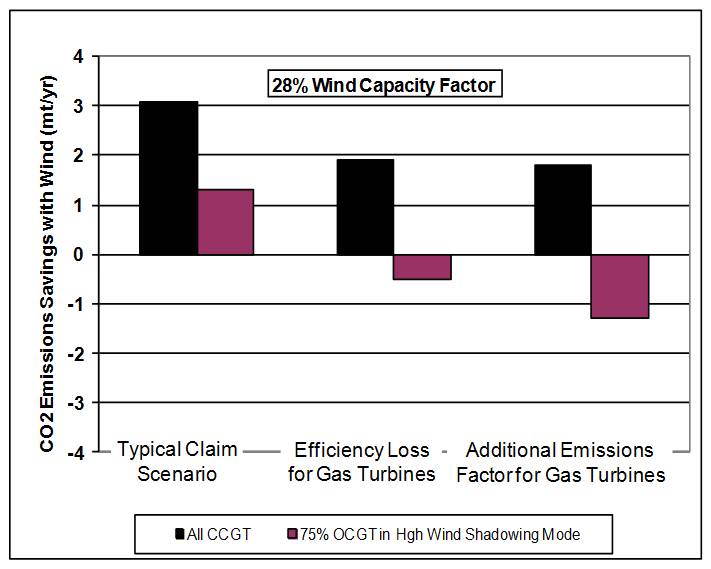 Notwithstanding the nature of the calculator, robust inferences can be drawn from its results because the analysis captures a fuller range of considerations. The general conclusion is clear: industrial wind power does not produce the claimed benefits of reductions in fossil fuel consumption and CO2 emissions when up-and-down backup generation inefficiencies are taken into account.

The first shows the effect of varying the OCGT:CCGT mix for the wind high production period. The 25:75 ratio for OCGT:CCGT gas plants for low wind production periods is held constant for all cases shown. All other parameters are held constant. Figure 1 shows the results for gas savings and a range of capacity factors. Negative values represent increased gas consumption. 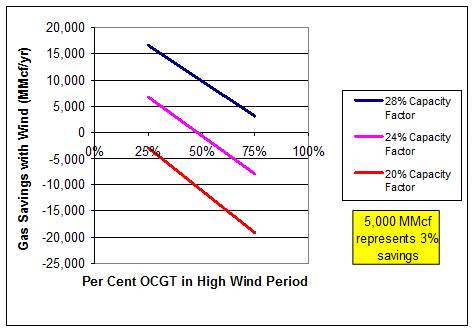 Reducing the OCGT component to 25 per cent at a 28 per cent wind capacity factor still produces only about 25 per cent of the simplistic, Typical Claim scenario reductions. 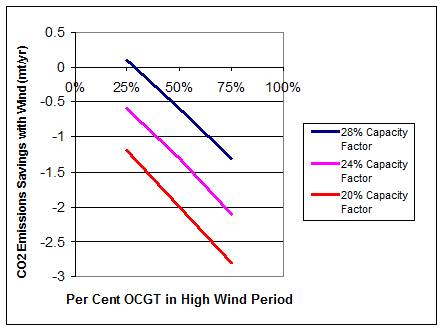 The lower ranges for OCGT plants in the mix are likely not feasible.

Varying the Heat Rate Penalty of the Gas Plants

Some may argue that the heat rate penalties in the examples shown above are either too high or too low. Figure 3 and Figure 4 show the effects for the values used, plus or minus 5 percentage points for CCGT plants. This produces a range from 10 to 20 per cent for CCGT plants and 14 to 27 per cent for OCGT, with corresponding CO2 emissions increase factors. Other parameters are held constant at the values used for the 15 per cent (CCGT) and 20 per cent (OCGT) heat rate penalties calculator runs. The “x” axis is in CCGT terms. 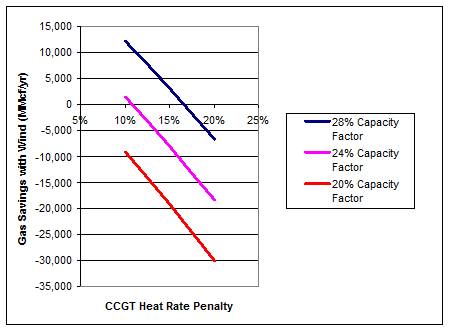 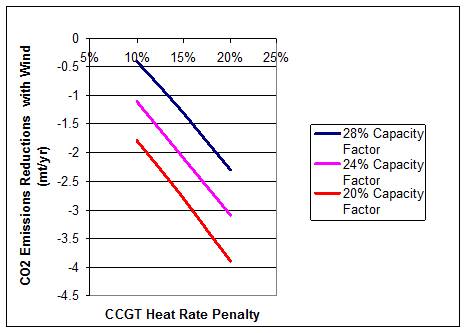 Values below 10 per cent for CCGT plants will increasingly support wind proponent estimates. Values above 20 per cent may be viewed by others as more applicable.

The calculator assumes that a year can be divided into high and low wind production periods, and allows for the variation of this by input parameter. A ratio of 50:50 was used. Further, the amount of the skewing of wind production between the two periods can be altered. For the calculator runs shown, the skewing is assumed to be the annual average plus and minus 50 percent. This sensitivity analysis shows the effect of varying the amount of the skewing from 20 to 50 per cent. Figure 5 is the result for gas savings by varying this percentage from 20-50 per cent. 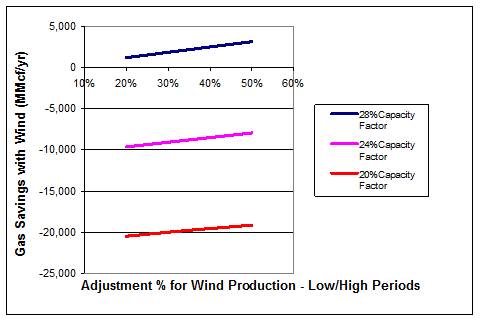 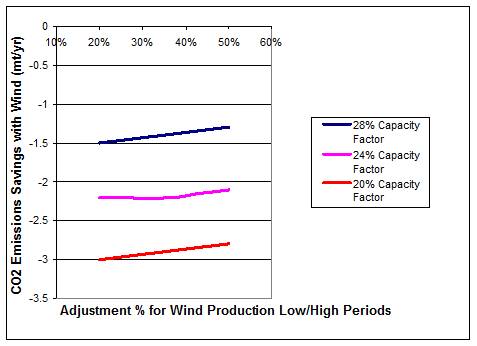 In general, the effect of reducing the range of variation between the low and high wind production periods is to reduce savings. This is caused by a decrease in wind production in high wind periods, resulting in increased gas plant production, especially OCGT. So the use of 50 per cent is more beneficial to wind.

The effect of these sensitivity analyses is to support the above conclusions.

[For anyone coming across this as their first reference to my calculator, you should be aware that updates have been provided, first at http://www.masterresource.org/2010/02/wind-integration-incremental-emissions-from-back-up-generation-cycling-part-v-calculator-update/, and subsequently at http://www.masterresource.org/2010/11/the-calculator-14-results-part-i/ .]

E.ON Netz, Wind Report 2004. This no longer seems to be available online.

Union for the Co-ordination of Transmission of Electricity (UCTE), Integrating Wind Power in the European Power Systems – prerequisites for successful and organic growth, 2004, http://www.entsoe.eu/_library/publications/ce/otherreports/UCTE-position-on-wind-power.pdf

Kent Hawkins, a retired electrical engineer living in Ontario, has spent the last eight years researching the integration of industrial-scale wind plants into electricity systems. He can be reached at kenthawkins@rogers.com.