“One must wonder when the climate-damaging effects on agriculture will appear. Maybe rising agricultural production is like rising polar bear populations—the decline begins tomorrow.”

The year 2013 has been a great year for global agriculture. Record world production of rice and healthy production of wheat and corn produced strong harvests across the world. These gains were achieved despite continuing predictions that world agricultural output is headed for a decline.

The US Department of Agriculture (USDA) reports that world rice harvests for 2012/2013 were a record 469 million metric tons. Corn and wheat harvests were also strong, following record harvests for both grains during the 2011/2012 season. The USDA is now projecting world record harvests for corn, wheat, and rice for 2013/2014. 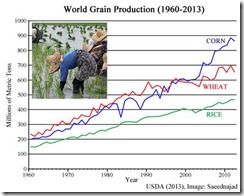 These numbers cap a 50-year trend of remarkable growth in world grain production.…