The wind industry is showing increasing signs of desperation as some unpleasant realities are emerging despite the unending propaganda storm from the American Wind Energy Association (AWEA).

Not only has it come out that Big Wind lobbied (and helped produce!) a report from the National Renewable Energy Laboratory that slagged a Spanish study showing the epic failure of wind economics in Spain, but now, wind energy executives are admitting that they can’t obtain parts to build wind plantations unless they’re built abroad.

And, showing that hubris knows no bounds, they’re also lobbying for the U.S. to up the ante on wind, passing a renewable energy standard that would guarantee wind energy profits into the indefinite future.

According to The Hill, wind executives are engaging in a lobbying-flurry on Capitol Hill this week, going after the “Buy American” agenda that Senator Chuck Schumer is pushing with regard to renewable power projects funded with stimulus grants.…

As many of us have argued for some time, simple economic theory suggests that the government’s push to create “green jobs” will ultimately kill more jobs on net. While the theoretical argument is fully compelling, however, it’s nice to have hard data to show people that this particular theory plays out in reality.

That’s why this study, from the Universidad Rey Juan Carlos in Spain should be kept handy (the report is in English).

After examining Spain’s experience with an aggressive wind-power program, the researchers concluded:…

Wind: Energy Past, not Energy Future (the intermittency curse then, as now) 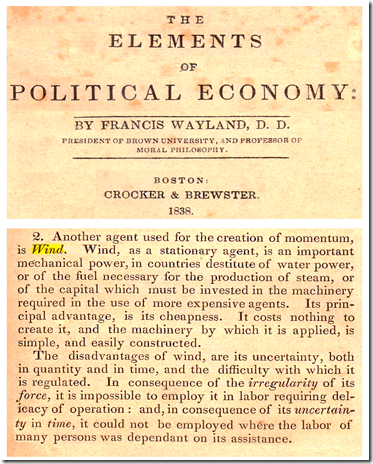 The Pitfalls in Job Counting (“Green” jobs versus economic jobs)