Behind the IPCC Curtain: the Costs of Climate Mitigation Policy

“Financing the IPCC’s conclusions via carbon taxes would bankrupt even the wealthiest countries; even at the low end of the IPCC estimates…. Alas, we have to destroy the global economy to save it.”

The 48th session of the United Nation’s Intergovernmental Panel on Climate Change convened from 1-5 October 2018, in Incheon, Republic of Korea. On Oct. 6, 2018 the UN’s IPCC modified downward the Paris Agreement goal of a maximum 1.5 deg. C rise requiring net-zero carbon emissions by 2050. The following day, the IPCC released its voluminous “special report” shown by the following screenshot: 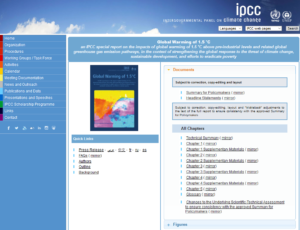 The report went to great lengths estimating the environmental costs of climate change and the benefits (including economic benefits) from implementing their “findings,” but never analyzed the economic costs. In fact, Chapter 1 of the IPCC special report said this about economic cost/benefit analyses (p. 10):

Any comparison between 1.5oC and higher levels of warming implies risk assessments and value judgements, and cannot straightforwardly be reduced to a cost-benefit analysis (Kolstad et al., 2014).

Regardless, the report did go on to put a price range on what it would take in the form of carbon taxes to avoid what the IPCC claims will be “Catastrophic Anthropogenic Global Warming.” Yet the IPCC never quite defines that nor what the global damages would be in such a scenario.

Without that, there’s no reason to conclude ‘just any cost’ would be worth it to avoid such. As indicated below, the cost themselves would be ‘catastrophic’ and lead to chaos and likely the end of the current world order. The carbon tax is but one, albeit significant, part of what it would take to result in net zero carbon emissions.

That range of taxes is between $135 and $5,500 per (metric) “tonne.” Importantly, if the world is going to buy insurance against “Catastrophic Anthropogenic Global Warming” the least we could do is insure reasonable premiums. As Robert Murphey pointed out in 2014 (here):

Climate change mitigation policies are now routinely described as a form of “insurance,” which admittedly may end up costing more than they’re worth, but will give peace of mind by preventing truly catastrophic outcomes. In the present post I’ll explain the shortcomings of this analogy, and show that it doesn’t justify the aggressive policies that many advocate in spite of their collapsing case for alarmism.

Taxing carbon at the levels proposed in this report would make humanity trillions of dollars poorer, causing far more damage to economic growth than it might alleviate in terms of climate change…. The size of the proposed carbon tax is cartoonishly large.

The purpose of this article is to further illustrate Pyle’s statements.

Now multiply the above costs (in red) by 32.5 to get the total cost per year of a global carbon tax.

Admittedly, these annual costs should decline every year thereafter. Regardless, however, even at the lowest end the IPCC’s estimates would dwarf the present Global GDP.

The following chart puts these costs into perspective via Global GDP data: 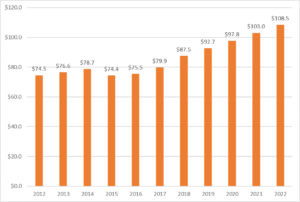 It is unclear what the IEA report includes as carbon emissions. The IEA report repeatedly speaks of “carbon dioxide” but not other “carbon dioxide equivalent emissions” (CO2e). Assuming the IEA data does not include CO2e, overall carbon-related emissions (hence costs) would increase by about 35% based on the following EPA data as an indicator: 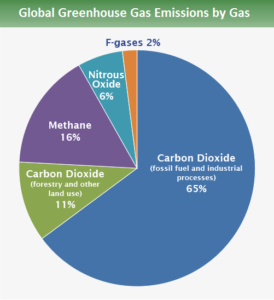 Regardless, financing the IPCC’s conclusions via carbon taxes would bankrupt even the wealthiest countries; even at the low end of the IPCC estimates.

I could go on to hyperbolize about what this means for free markets, but I hope I don’t need to; or at least not for the MasterResource audience.

Alas, the situation is reminiscent of an economic equivalent of Ben Tre, the quiet town where the Vietnam War began. To paraphrase: We have to destroy the global economy to save it.

Mark Krebs, an engineer by training, has been involved with energy efficiency design and program evaluation for more than thirty years. He has served as an expert witness in dozens of energy-efficiency filings, which he summarized in a Public Utilities Fortnightly article, “It’s a War Out There: A Gas Man Questions Electric Efficiency” (December 1996). For more about the author, please see Mark Krebs: Digging Down on Energy Efficiency Claims (an interview).