“Understanding the impact of wind requires very detailed analysis of ramping events on a short term basis. The analysis provided here raises even more questions, so there is still much to be learned to properly quantify any impact from the presence of wind on fossil fuel or emissions savings. Arguably the complexity involved defies analysis.”

“Wind increases the magnitude of the balancing activity by increasing the ramping over load alone with a notable number of large ‘outliers’. The dynamic impact of this can substantially increase the rate of fossil fuel consumption and emissions in fossil fuel plants in the net load balancing role over that claimed by any less rigorous analysis.”

Part I yesterday in this three-part series examined wind intermittency/integration basics. Part II today focuses on the ramping impacts of the combination of load and wind (net load). This is shown as the changes in their levels between 5-minute intervals. Also considerations about the determination of the efficiency of net load balancing plants at each time interval will be addressed.

In the short term (a few minutes or less), load is as unpredictable as wind, and requires continuous balancing activities, which is part of ancillary services. However, in the longer term (hours and days), load changes in a reasonably predictable way to rise to, and fall from, peaks in the morning and afternoon.

The response to this is to bring intermediate and peaking generation plants online and then remove them on a scheduled basis. Although somewhat predictable in a general sense in the longer term, wind is less predictable than load in this time frame.

The following topics are more important than the basics covered in Part 1.

Analyses today do not completely capture the dynamic impact imposed on wind balancing generation plants by the erratic combination of load and wind. Many simplistically use the basic information of electricity production by fuel type, coupled with simplistic determination of efficiency levels or questionable published emissions/fuel information to assess the performance of wind in reducing fossil fuel use and emissions, all of which still show notable savings with wind.

This implicitly assumes that the efficiency level experienced is that of a generation plant operating continuously at this level for a much longer period, and is thus static in nature as it ignores the dynamic effect of the change in loading within this short period.

Taking this into account would further decrease the efficiency level actually experienced, which would result in higher specific fuel consumption and specific emissions than determined using the simpler static approach. Establishing the dynamic effects is much more difficult and there is little, if any, adequate data available to do this.

Unfortunately, the apparent comprehensive nature of this static approach, which is sometimes applied at the individual generation plant level, is easily mistakenly seen as conclusive.

To illustrate the short term dynamic implications, imagine the effect on gasoline consumed by your car on the highway of randomly every few minutes jamming on the brakes or tramping on the accelerator to various degrees. Compared to driving at a constant speed for the same trip, or even relatively longer periods of different constant speeds, considerable more gasoline will be used and emissions produced versus normal driving.

Ramping With Wind Present versus the No Wind Installed Condition

The change in ramping between intervals due to wind presence in the electricity system, which is change in net load minus load alone between intervals and can be positive, negative and no change. [1] Table 1 provides a summary of the ramping event activity.

The distribution of the number of ramping events by size is very important and this is provided in Table 2. 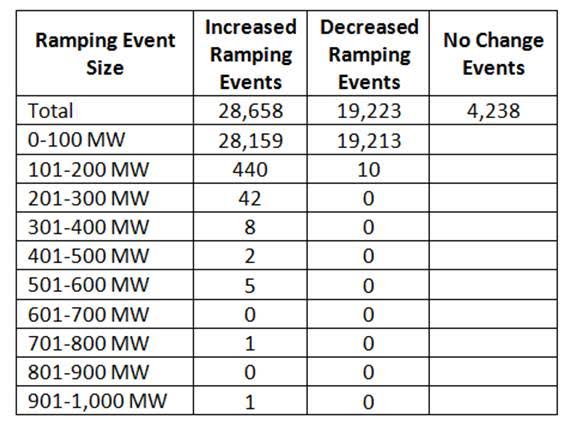 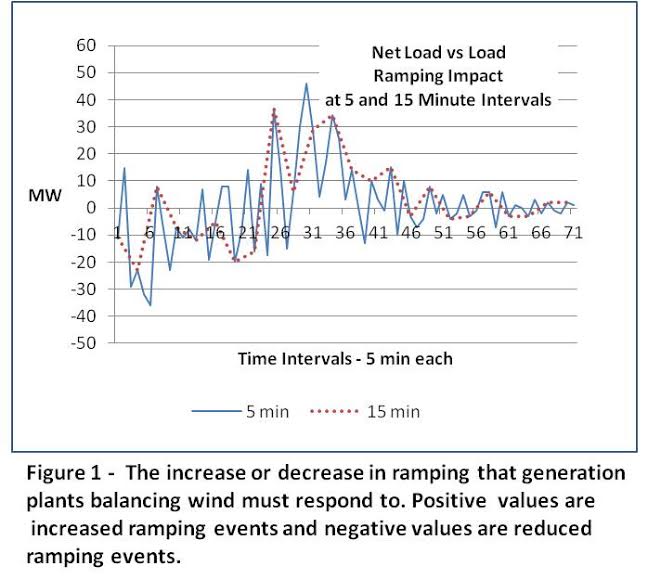 As can be seen there is considerable smoothing effect at 15-minute measuring periods versus 5-minute. Remember that positive values mean increases in ramping over load alone and negative values decreases, and what is shown is the size of ramping involved. Both include up and down changes of equal size, as discussed above.

It is likely with wind installed that additional spinning reserve fossil fuel plants may be required to meet the larger number and frequency of increased ramping events, especially in short term time intervals. This is an example of possible increases in fuel consumption and associated emissions while providing little or no electricity at the time.

Wind increases the magnitude of the balancing activity by increasing the ramping over load alone with a notable number of large ‘outliers’. The dynamic impact of this can substantially increase the rate of fossil fuel consumption and emissions in fossil fuel plants in the net load balancing role over that claimed by any less rigorous analysis. Although a paper may claim that its analysis deals with this, it has not yet been adequately determined by anyone.

Understanding the impact of wind requires further very detailed analysis of ramping events on a short term basis. The analysis provided here raises even more questions, so there is still much to be accounted for to properly quantify the impact of wind on fossil fuel or emissions savings. Arguably the complexity involved defies analysis.

Part III tomorrow will complete the series with a discussion of other considerations affecting the analysis of fossil fuel consumption and emissions.

[1] These are calculated as the difference between the absolute values of load minus wind (L-W) and load (L). A simple example illustrates this. For a change between intervals in L-W of +2 MW and with an underlying change in L of -1 MW, the change in ramping relative to the previous level is not 3 MW but 1 MW.

This means the presence of wind has increased ramping by 1 MW over load alone.

The negative result means the presence of wind has reduced ramping by 1 MW.