“While we await global temperatures to start rising again, there are signs that the overall rise won’t be as fast as we have once been led to believe…. [A] future characterized by modest rather than extreme climate change elevates the role of adaptation relative to mitigation in most discussions.”

As global temperatures in 2012 further cement a modest warming rate in response to anthropogenic climate influences, the light burns ever brighter for the “lukewarmers”—those intrepid souls who accept that human activities are impacting the character of the world’s climate, but hold the opinion that, when taken together, these influences are–and will be–relatively modest.

While lukewarmers’ individual opinions of whether or how to do “something” about anthropogenic climate change vary, a future characterized by modest rather than extreme climate change elevates the role of adaptation relative to mitigation in most discussions.

A year ago, in this space, I highlighted some positive lukewarmer developments in 2011. These included findings that the observed temperature trends over (and within) the past 3 decades are lower than climate model projections and that the climate sensitivity—that is, how much the average global temperature will rise under conditions of a doubled atmospheric concentrations of carbon dioxide—has likely been overestimated.

Here, I review some significant events from 2012. Many continue these same themes. I am sure that there are others that did not make my list. If your favorite is not here, please feel free to include a brief description of it in the Comments section below.

First, let’s have a look at the global average temperature for 2012. I am sure that most readers are already aware that in the U.S. the annual average temperature was the highest ever recorded (since 1895). But the U.S. makes up only about 2% of the globe and such small areas, especially located in the Northern Hemisphere extratropics, are subject to large regional variations.

Figure 1 shows the pattern of annual average temperature anomalies across the globe in 2012. Notice that the contiguous U.S. happens to be in the bulls-eye of higher than average temperatures. If you spent 2012 in Alaska, you’d probably be wondering what all the fuss was about, because there the state experienced its 11th coldest year on record (since 1918). 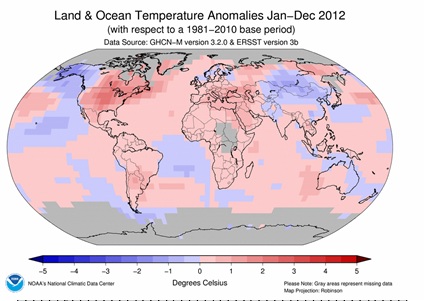 Figure 2 shows the global temperatures as compiled for the earth’s surface as well as for the lower atmosphere from 1979-2012. I show just a single compilation for each, although there are several such compilations available. The differences among the various compilations are interesting, but not large enough to alter the general picture of the situation. The data in Fig. 2 begin in 1979, the year that satellite observations of the lower atmosphere begin and very near the beginning of the second warming period of the 20th century—the one which is largely associated with rising anthropogenic emissions into the atmosphere. 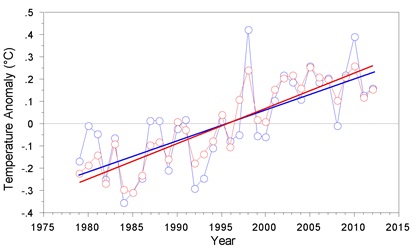 As Figure 2 shows, the global average temperature in 2012 fell below the overall linear trend line and pretty much on the same plateau as temperatures have been since 2001. Together, this has the effect of putting a bit of negative pressure on the trend in global temperatures since 1979 and further establishing it as falling below expectations (especially during the 21st century).

While we await global temperatures to start rising again, there are signs that the overall rise won’t be as fast as we have once been led to believe.

In 2012, several papers were published in the scientific literature which provided evidence that the climate sensitivity lies towards the low end of the range of estimates provided in the most recent assessment report from the Intergovernmental Panel on Climate Change (IPCC). In its 2007 Fourth Assessment Report, the IPCC concluded that:

“[The equilibrium climate sensitivity]is likely to be in the range 2°C to 4.5°C with a best estimate of about 3°C, and is very unlikely to be less than 1.5°C. Values substantially higher than 4.5°C cannot be excluded, but agreement of models with observations is not as good for those values.” (emphasis in original)

Compare that assessment with some findings from the literature published during the past year.

Additionally, our estimates of climate sensitivity using our [simple climate model] and the four instrumental temperature records range from about 1.5°C to 2.0°C. These are on the low end of the estimates in the IPCC’s Fourth Assessment Report. So, while we find that most of the observed warming is due to human emissions of [long-lived greenhouse gases], future warming based on these estimations will grow more slowly compared to that under the IPCC’s “likely” range of climate sensitivity, from 2.0°C to 4.5°C.

The millennium-scale response to doubling of the CO2 concentration found here, 2.0 ± 0.3°C, thus has presumably not yet reached full equilibrium, and can therefore only be cautiously compared with the equilibrium climate response of the 2007 IPCC report (Meehl et al 2007). It is at the lower end of the range considered likely (2-4.5°C), and lower than its best estimate (3°C).

We estimate the equilibrium climate sensitivity to be about 2.5°C with a high probability of being under 4°C, though these results are subject to several important caveats.

The [climate sensitivity] mean is 2.0°C… which is lower than the IPCC estimate from the IPCC Fourth Assessment Report (IPCC,2007), but this estimate increases if an extra forcing component is added, see the following text. The 95% credible interval (CI) ranges from 1.1°C to 4.3°C, whereas the 90% CI ranges from 1.2°C to 3.5°C.

Figure 3 puts all of these results together. It shows the IPCC climate sensitivity best estimate and range, along with that computed from the articles mentioned above and some notable findings published in 2011. Clearly, there is increasing evidence that the IPCC estimate should be shifted towards the left (i.e., to lower values). It’ll be interesting to see if indeed this occurs in the IPCC’s Fifth Assessment Report, which is due out later this year. 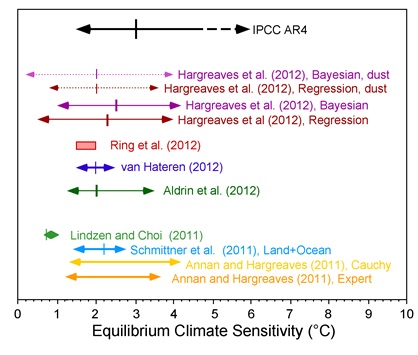 Fig. 3. Climate sensitivity estimates from new research published since 2010 (colored), compared with the range given in the IPCC Fourth Assessment Report (black). The arrows indicate the 5 to 95% confidence bounds for each estimate along with the mean (vertical line) where available. Ring et al. (2012) present four estimates of the climate sensitivity and the red box encompasses those estimates. The right-hand side of the IPCC range is dotted to indicate that the IPCC does not actually state the value for the upper 95% confidence bound of their estimate. The thick black line represents the IPCC’s “likely” range.

One necessary part of rapid and extreme global warming is that a series of positive feedbacks kick in to boost a modest warming from carbon dioxide increases alone (an increase of about 1.2°C for a doubling of the atmospheric concentration) into something much more alarming. One such positive feedback that has been posited is known as the “methane bomb.” The idea is that as the globe warms (especially in the Arctic), methane (a greenhouse gas with more warming power than carbon dioxide) is released in increasing amounts from the ocean seabed and the land from thawing permafrost. More warming, more methane release, more warming, etc.

But, contrary to disaster, there doesn’t seem to be much of an increase in methane. Yes, methane is increasing in the atmosphere, but not at a particularly quick pace, and most of the increase seems to be coming from some place other than the arctic. The preliminary indications from a study examining methane release from the seafloor in the Greenland Sea hit the presses last year and concluded that “[a]bove all the fear that the gas emanation is a consequence of the current rising sea temperature does not seem to apply… the observed gas emanations are probably not caused by human influence.” And this wasn’t the first time that results counter to the methane bomb have been reported. And there was even some new results suggesting that plants are helping to uptake methane. Good news for lukewarmers.

Another block in the foundation of alarming global warming is that the earth’s natural carbon sinks will saturate and more and more of the carbon dioxide emitted by human activities will remain in the atmosphere. Currently this number stands at around 45 percent, with natural sinks—primarily the oceans and plant biomass—taking up about 55 percent of our emissions. A paper by Ballantyne et al. (2012) showed that these percentages have remained pretty constant for the past 50 years, which means that the natural carbon sink has been expanding as our carbon dioxide emissions have increased.

Not that this should come as too much of a surprise as it is well known and demonstrated by literally thousands of scientific studies that atmospheric carbon dioxide is a plant fertilizer, so the more that there is, the better plants grow.

Here is how Ballantyne et al. summarized their results:

From a global mass balance perspective, net uptake of atmospheric CO2 has continued to increase during the past 50 yr and seems to remain strong. Although present predictions indicate diminished [carbon] uptake by the land and oceans in the coming century, with potentially serious consequences for the global climate, as of 2010 there is no empirical evidence that [carbon] uptake has started to diminish on the global scale.

It is not looking good for this scare scenario—another plus for lukewarmers.

Perhaps the single greatest threat from climate change (from a human perspective) is the potential of a large and rapid rise in sea level. This could occur if Greenland and/or Antarctica lost a large amount of ice in a short period of time. While such a catastrophic occurrence is expected by some, and to a lesser but still problematic degree by others, more and more evidence comes in that suggests that the rate of sea level rise will be much slower, proving a better opportunity for it to be dealt with.

Noteworthy studies from the past year include King et al. which found that the rate of ice loss from Antarctica has not been accelerating and amounts to less than one-hundredth of an inch per year.

Less and less does it look like rapid, catastrophic sea level rise is a possibility.

The bottom line remains the same as what I wrote last year, with additional evidence of support.

Here is what I wrote then:

So what I have documented is a collection of observations and analysis that together is telling a story of relatively modest climate changes to come. Not that temperatures won’t rise at all over the course of this century, but that rather than our climate becoming extremely toasty, it looks like we’ll have to settle (thankfully) for only lukewarm.

My guess is that 2012 will hold more good news for lukewarmers, both in terms of supportive scientific findings, and also in a migration of folks towards the middle of this issue. As the being lukewarm becomes a bit more comfortable, I imagine that more folks will be drawn in.