Peeling Away the Onion of Denmark Wind (Part I)

[Editor’s note: This series is an extensive technical analysis of wind electricity in Denmark. The intent is to develop: (1) plausible conclusions without resorting to extensive mathematics (except that provided by others) , and (2) a framework within which to evaluate other claims of emissions relating to wind backup from fossil plants.]

According to wind proponents, Denmark is a model of wind energy use for electricity generation to be emulated. It is claimed or suggested that:

These conclusions are superficial at best and invalid at worse. The analysis required to show this, however, is extensive and technical because the Denmark power market is very unique and wholly unlike the market in the U.S. or the UK.

A Note on Sources

Recently the American Wind Energy Association (AWEA) has made claims about Denmark, based on data from the U.S. Department of Energy (DOE). This is at least one step removed from the source for most of the information in this series, the Danish Energy Agency (DEA). Its report 2008 Energy Statistics, and associated Excel worksheet tables, is one of the best sources of comprehensive information on the Denmark electricity situation.

There is another source with very detailed information, Energinet.dk, which is the Danish national transmission system operator for electricity and gas. It has been used for some more extensive mathematical analyses that are referenced here, for example Bach. As will be seen, even these have limitations because of the unique and complex nature of the Denmark electricity system.

As a result, this analysis purposely based more on logic than precise mathematical treatments, but building on the mathematical work of others. The limitations in both cases are the complexities, which will be explained, but both approaches provide insights into the Denmark case. In the final analysis, all available evaluations of the wind-generated electricity (this will frequently be referred to as just “wind”) realities in Denmark are speculative, but some more plausible than others, and readers are left with having to draw their own conclusions.

Claims based on a quick reference to a few selected statistics should be seriously questioned, and this series provides a context within which all claims can be evaluated.

Another Danish source that is used is the Danish Energy Association’s reports, especially for detailed time series of annual electricity imports/exports. Unfortunately, it seems to have stopped publishing this online in favour of an annual report, with limited, recent information, the 2008 “Danish Electricity Supply ’08 – Statistical Survey” available here. This is an industry association and is not to be confused with the DEA. Other sources are used as indicated.

As an interesting aside, note the challenge that wind faces in replacing fossil fuel and nuclear in Germany, which provides insight into why that country is turning away from the previous government’s commitment to eliminate nuclear plants by 2021. Also note the nuclear component for Sweden. 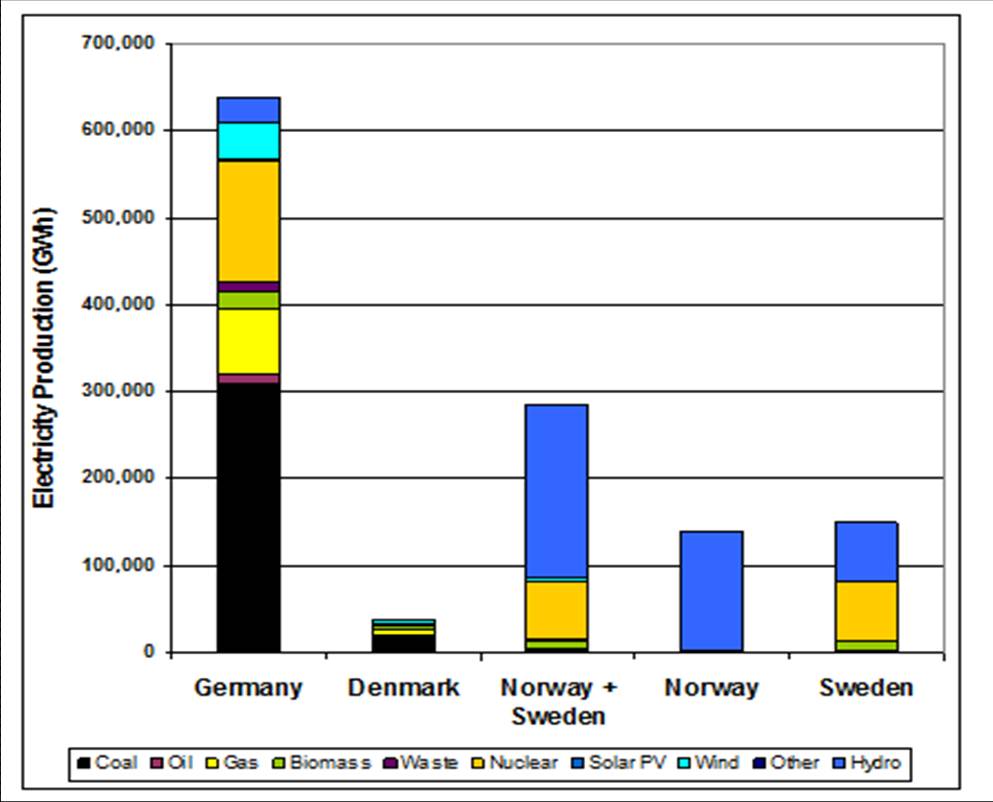 In effect, Denmark is a conduit connecting the hydro resources in Norway/Sweden to Germany and other parts of north-central Europe. Interconnectors have been put in place to facilitate this as well as a northward flow in dry years. The presence of these connections, with capabilities that can handle the wind production in question, has allowed Denmark’s extensive wind implementation, as it piggy-backs on them to export the high wind levels, as will be shown.

By the above measures, Denmark represents a unique situation, which cannot easily be reproduced elsewhere. Otherwise it would not be able to sustain the level of wind penetration that has been implemented. For a number of years Denmark has had a significant share of world markets for wind turbines and associated technology and has built an industry dependent on this. There are consequences to this short-lived industrial strategy, which relies on significant government subsidies over time, due to the inevitable competition from very large players, for example, China.

After a hiatus in wind implementation within Denmark since 2003, including offshore, it has recently re-committed to substantial offshore implementations, which has to be viewed in the light of this competition as well as questionable European Union energy policies. For comments on these policies, see the Charlemagne article in the January19, 2008, edition of the Economist and an analysis by Helm.

Electricity Generation and Consumption within Denmark

Before proceeding, and to provide context, the following reviews a number of factors important to understanding the Denmark electricity situation. Figure 2 shows the domestic electricity generation by fuel type for Denmark. This series starts at 1994 because that is the earliest that the DEA provides detailed breakdowns. This figure does not illustrate domestic consumption because net imports are not included. Domestic consumption has shown a steady gain over this period as will be shown below. 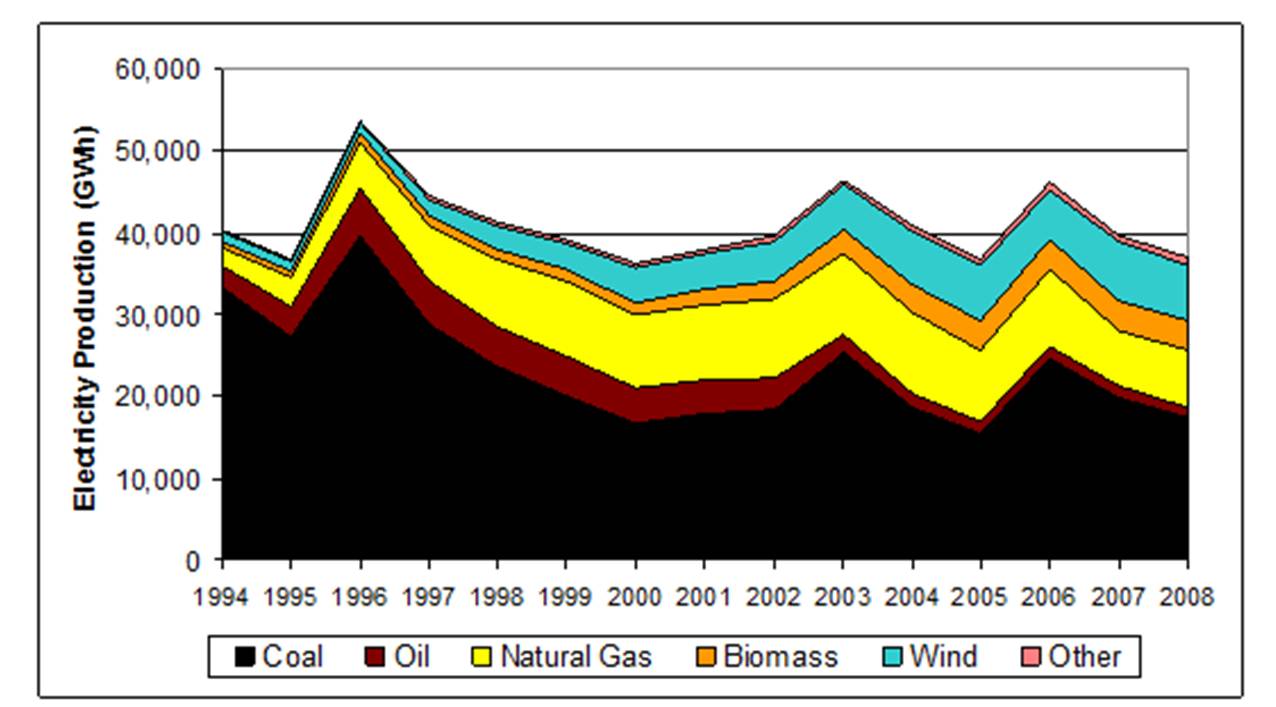 Figure 2 – Domestic electricity generation by fuel for Denmark before consideration of net imports.

It looks like Denmark has substantially reduced its reliance on coal for its electricity consumption, but this is not a valid conclusion. To see domestic consumption, net exports must be considered. This is provided in Figure 3, which is a bit confusing but can be explained. 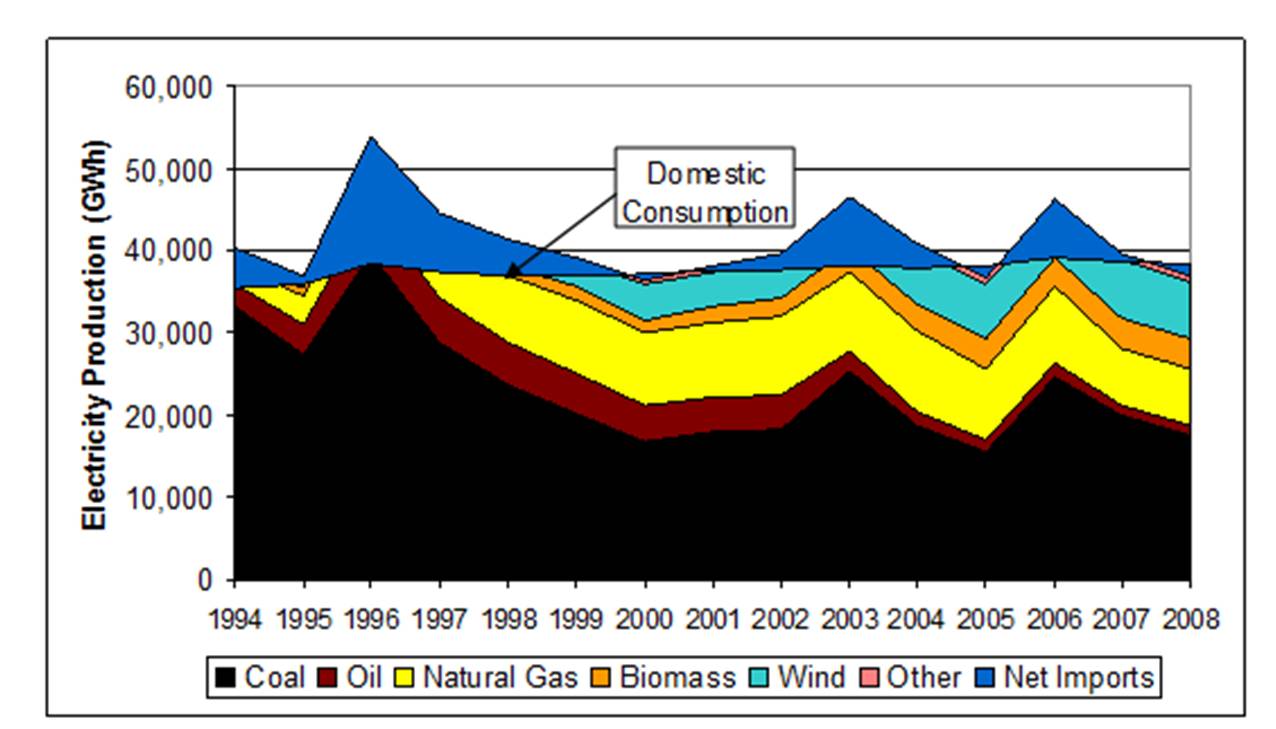 Note that the higher level of fossil-fuel generated electricity leading up to 1996 was due to significant net exports, not internal consumption. So reductions in coal for domestic electricity consumption have not been as dramatic as Figure 1 shows, because in 1996 exports were dominated by fossil-fuel electricity production.

The spikes in production and net exports in 2003 and 2006 occurred in dry years in the Nordic region and water reservoirs were less full. On the surface, just looking at net exports, it looks like fossil-fuel production increases could account for this. There are reasons to support the view that the increased wind production was substantially exported in these years, which will be discussed in detail later.

Denmark’s Use of Combined Heat and Power (CHP)

Another important characteristic is the nature of the plants supplying Danish electricity. Figure 4 shows the electricity production by type of producer for Denmark, which is predominantly CHP. As output for combined heat and power tends to be determined by demand for heat versus electricity, this indicates their unsuitability for wind balancing. However, the large-scale CHP units production is divided into two components: (1) combined electricity and heat production and (2) electricity production. The latter typically represents slightly more than 50% of the total.

Figure 4 – Electricity production in Denmark by type of producer. Note that almost all production

is from Combined Heat and Power (CHP) units, which will be governed more by heat demand than

This suggests that some of the Danish fossil fuel plants could be used to balance wind. The alternatives are the use of imported electricity for this purpose, most likely hydro from Norway/Sweden, or a combination of the two. To provide further insight into this, Figure 5 shows the efficiencies calculated from DEA information for the predominant fossil fuel plant types – coal and natural gas. 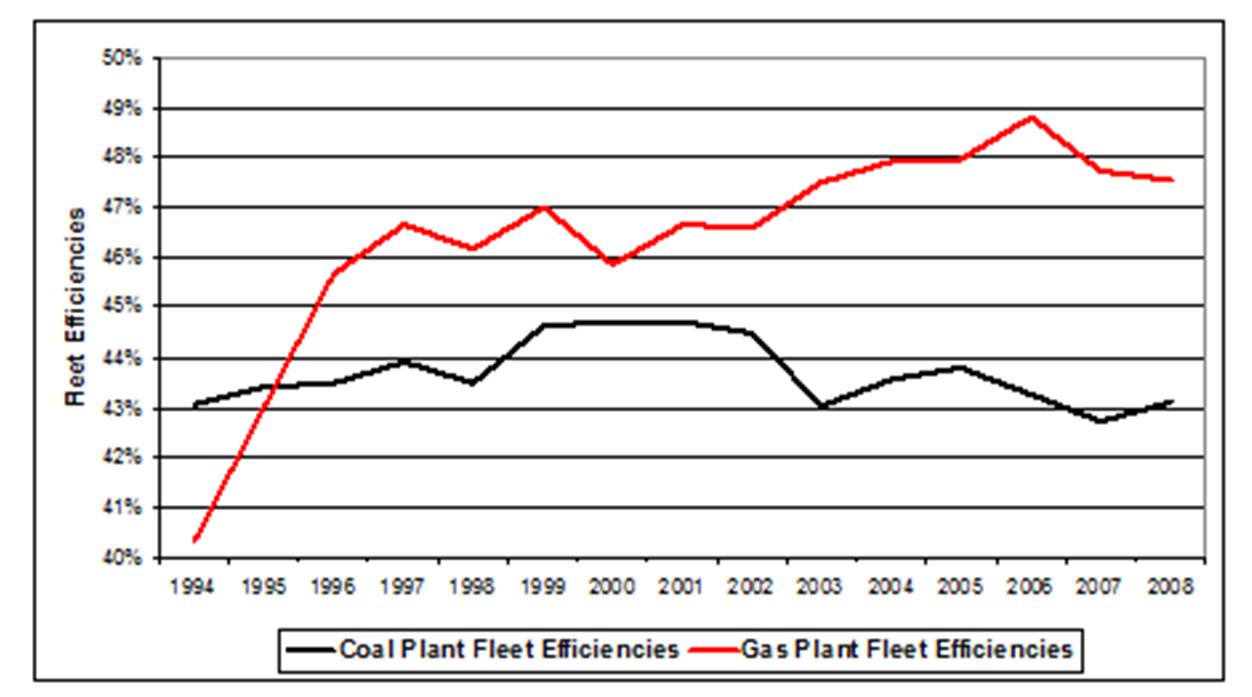 Both plant types show relatively high levels of efficiency, with the gas plant fleet showing an improving trend, likely due to newer plant installations, and coal a decreasing trend since about 2002. There are a number of reasons for changes in plant efficiencies year-over-year and over longer periods, such as deterioration with age, offset by effective maintenance and upgrades; replacement of plants with more efficient types; and parasitic loads of pollution reduction technologies, but Figure 5 raises at least two questions:

Part IV will look at CO2 emissions in more detail, but the calculated level of CO2 emissions from the DEA report in 2008 for coal plants is about 0.79 tonnes/MWh, and gas plants about 0.43 tonnes/MWh, without any significant change since the mid-1990’s. Both of these reflect plants under normal operating conditions, that is, without continuous cycling required in a wind balancing role. There are some subtleties to be explained in the intervening years. In particular note the coal plant efficiency reductions in 2003 and 2006/7, which will be returned to later. Fossil-fuel plant efficiency levels published by the DEA on page 37 are lower, but are based on all fossil fuel plants and adjusted fuel consumptions, which are not appropriate reference points, as will be discussed further in Part IV.

The message in this post is that Denmark is a very unique situation. It is not one that can be reproduced virtually anywhere else. Further, as will be shown, Denmark does not enjoy, and should not be credited with, the benefits often claimed for it.

The next step, which is provided in Part II, is a lower level of analysis of exports and imports with Denmark’s electricity trading partners. It will explain the impact of normal, wet and dry years in the Nordic region on electricity flows between Denmark, Norway, Sweden and Germany. All of this is necessary to any useful understanding and analysis of the export of Danish wind electricity and CO2 emissions savings that will be provided in Parts III and IV.