“The current strategies major implementations of ‘clean’ energy sources, largely depending on wind and solar, to address concerns about climate change are seriously misguided, and should be abandoned.”

Part I (total usage) and Part II (electricity) showed that fossil fuels dominate primary-energy consumption–and will continue to do so. This expectation comes from a range of official forecasts–but really from the imbedded inertia of the system where oil-powered transportation dominates and power generation is wed to fossil fuels with nuclear in the mix.

The electricity sector is projected to grow to about 50 per cent of the total by 2035; Part III today will attempt to quantify the emissions impact within a range of primary-fuel scenarios along with the associated capital costs.

Regarding the power market, wind and solar will actually play a minor, even inconsequential, role in reducing emissions by 2035. Worst still for those that believe human-caused CO2 emission are responsible for disastrous climate change, other reasonable options now available will not have a timely effect. Adaptation, and using wealth diverted from inappropriate energy policy, is a key public-policy takeaway from this series.

Removing wind and solar from the mix planned for 2014–2035 will reduce investment costs by almost $3 trillion globally, with very little, if any, increase in CO2 emissions. What does become clear is that there is only one approach, apart from aggressive conservation, that would have had any chance of greater impact on human-caused emissions. So what should we do?

Table 1 shows global emissions levels for 2014 and projected to 2035 from three sources – BP plc, the U.S. Department of Energy/Energy Information Administration (EIA) and the Organisation for Economic Co-operation and Development (OECD). Not surprisingly, because of the complexities involved, there are differences among sources. As well, Table 1 shows a baseline for further analysis, calculated to allow the impact of changing the use of some primary energy sources in the electricity sector.

The adjustments then made to the above are as follows (see Table 2):

Table 2 shows the effect of these changes, which falls far short of the level of omissions savings that are claimed to be necessary.

Table 2 – Emissions for a Range of Electricity System Primary Fuel Scenarios (A, B and C) 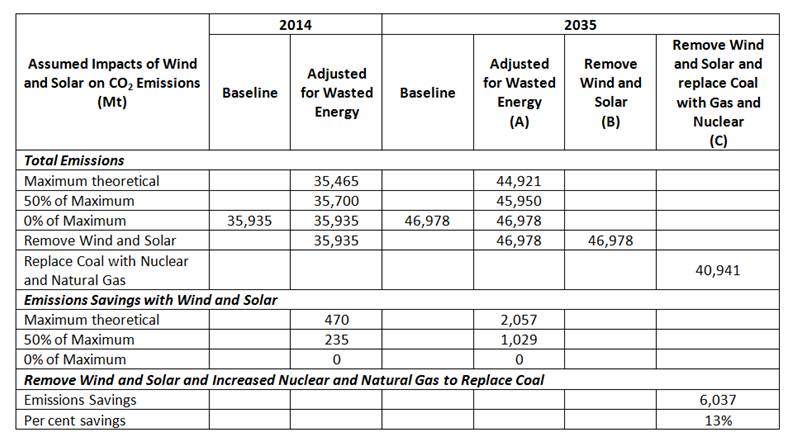 Scenario C produces the most emissions savings at the least capital cost.

Leaving wind and solar in the mix in Scenario D will produce very little if any additional emissions savings at about a 60 per cent greater capital investment as in Scenario C.

None of these scenarios will provide the necessary emissions savings claimed as needed to prevent catastrophic global warming, assuming that this is human-caused. We have likely “missed the boat” in most developed countries by turning away from nuclear as we have done.

The range of climate outcomes is:

The bibliography in Part I still applies and some of it is repeated here for ease of reference.