Part I in this series reviewed the history of nuclear waste storage policy in the United States. This post reviews Project Salt Vault, an early attempt to solve the dilemma of storing spent nuclear fuel.   Part III will cover the history of Yucca Mountain.

The primary objective of Project Salt Vault was to demonstrate the safety and feasibility of handling and storing high level nuclear waste (HLW) solids from power reactors in salt formations. The engineering and scientific objectives were to:

· Demonstrate waste-handling equipment and techniques required to handle packages containing HLW solids from the point of production to the disposal location.

· Determine the stability of salt formations under the combined effects of heat and radiation (approximately 4,000,000 curies of radioactive material, yielding up to 109 rads).

· Collect information on creep and plastic flow of salt needed for the design of an actual disposal facility.

· Monitor the site for radiolytic chemical reactions, if such should occur.

The demonstration site selected was the inactive Lyons, Kansas mine of the Carey Salt Co. The 1,020-foot deep salt mine had operated from 1890 to 1948 and had been kept open for possible future use. Preparations for the demonstration began in 1963, and the first radioactive material was placed in the mine in November 1965. The tests involved the emplacement of actual irradiated fuel assemblies from the Engineering Test Reactor (ETR) in Idaho. The ETR assemblies were chosen because of their availability on a dependable schedule and their relatively high radioactivity levels.

The canisters were placed in a ring-like arrangement in the floor of the mine (Figure 1). Electrical heaters — used to compensate for lower heat release rates of the fuel elements compared with actual waste — were attached to the lower liners to raise temperatures in the central pillar in order to obtain information on its in-situ structural response to heat. 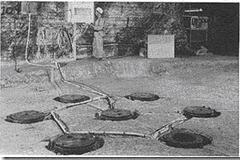 1. In-situ testing of nuclear wastes was conducted in the mid-1960s at the Carey salt mine. Source: Kansas Geological Survey

The program plan called for replacing the waste every six months to maximize the radiation dose to the surrounding salt formations. At the end of each phase, the spent fuel was retrieved and returned to Idaho.

The results showed that the structural properties of salt were not significantly altered by the high radiation levels. Useful information was gathered with respect to thermal stresses, migration of brine-filled cavities, and salt-flow characteristics as a function of temperature. For example, the demonstration revealed that inclusions of moisture, or brine, in the salt beds had a tendency to migrate up a thermal gradient toward a heat source placed in the salt. Quantities of brine were measured as migrating and interacting with the deposited waste canisters.

All the predictions of thermal and radiation effects based upon theoretical modeling and laboratory experiments were confirmed by the in-situ demonstration. Despite the rather high radiation levels and high thermal loading, no measurable radiolytic or excessive structural effects in the salt were observed. In addition, operations at Lyons, both at the surface and in the mine, were carried out without the use of hot cells (shielded nuclear radiation containment chambers used to protect workers). Maximum personnel recorded dose during any quarter was 200 mrem, principally to the hands of a worker.

The results of the Project Salt Vault demonstration led many in the AEC to believe that the use of bedded salt was satisfactory for the disposal of radioactive wastes. The experimental phase of Project Salt Vault was terminated in June 1967 when the last canister was removed from the mine. The Lyons Mine was then placed on standby on February 1, 1968.

The Beginning of the End

Workers from Project Salt Vault recall that it enjoyed the support of the local community. Four factors contributed to this climate of acceptance:

· The experiment was designed from the beginning to be reversible; that is, once it was completed, all the waste would be completely removed.

· Consultations were held with local groups before the project began.

· Efforts were made by Oak Ridge National Laboratory personnel to conduct the studies in full view of Kansans.

· Once the research started, regular tours were conducted in which the general public could visit the mine.

However, two intervening events forced the AEC to withdraw from the Lyons site. The first was a fire in 1969 at the Rocky Flats facility in Colorado, which produced pits for nuclear weapons. The accident generated a large volume of low-level, plutonium-contaminated debris. Following standard operating procedures, the managers of Rocky Flats sent the waste to the National Reactor Test Station in Idaho for storage. That action outraged Idaho’s political leadership, which saw no reason why their state should become the “dumping ground” for waste created in Colorado. They acted and ultimately extracted a commitment from AEC Chairman Glenn Seaborg (1961 – 1971) that all of the waste would be removed from Idaho by 1980. That pledge necessitated the construction of a disposal facility. The second factor, dominating an entire decade, was the growing opposition to nuclear power punctuated by the Three Mile Island accident in 1979.

Confronted with the immediate need for a repository, and given the available information at the time, the AEC’s siting strategy was to quickly identify a site for storage of nuclear wastes in a salt dome underlying about 500,000 square miles in portions of 24 states. Most importantly, bedded salt deposits were completely free of circulating groundwater and were isolated from underground aquifers by impermeable shale. Any fractures that might develop would be sealed by plastic deformation and recrystallization of the salt. The regions considered cut down the site options because only salt deposits 200 feet thick and lying within 2,000 feet of the surface were deemed suitable for the first waste repository. The largest areas meeting these criteria lay in central Kansas, although there were two smaller areas in Michigan and one in west central New York. In 1970, the AEC announced that, pending confirmatory tests, the Lyons site was being selected as the first full-scale national repository.

The degree to which the AEC had consulted with state and local officials before this announcement is in dispute. What is clear is the AEC’s decision did not receive the same ringing endorsement as the earlier experimental tests had. Moreover, state and local political opposition to the Lyons site was intense, particularly when technical problems with the site became apparent. The political arm-twisting had just begun.

A widely held view among leaders of the Kansas Geological Survey was that there was insufficient knowledge about repository design, the heat-flow models were primitive, and there were large gaps in the understanding of waste-rock interactions and rock mechanics. These concerns, among others, were the basis for opposition from U.S. Representative Joe Skubitz, who represented a Kansas district that did not include Lyons, and Governor Robert Docking. What followed was a barrage of criticism, and, despite the agency’s best efforts, protests asserting that the AEC was tramping on state interests took hold in the public mind.

As an example of the political discourse at the time, Skubitz inquired why the Kansas salt fields were selected instead of a site in the Salina Basin, which would have been closer to the operating and planned reprocessing plants in New York, Illinois, and South Carolina. The agency responded by saying the Kansas site possessed geologic characteristics more favorable than those of the salt in the Salina Basin. The AEC furthermore justified the long transport routes to Kansas by suggesting a reprocessing plant would be built in California, thus making the Lyons site centrally located. In retrospect, the AEC was tone deaf when responding to the nontechnical factors, relying on its highly technical justifications for the Lyons site. Furthermore, it is believed that the Kansas salt mine was chosen because of prior local acceptance of Project Salt Vault and because the AEC did not have the resources to investigate other locations, nor did it wish to spend two years studying other sites.

By August 1971, the controversy escalated to the level of involving both Kansas senators, Robert Dole and James Pearson, who sponsored an amendment to the AEC’s authorizing legislation. The amendment prohibited buying land or burying waste materials at Lyons until such time as an independent advisory council, appointed by the president, reported to Congress that the establishment of a repository and burial of waste could be carried out safely. Thus, the AEC’s inability to satisfy concerns of state officials resulted in its losing considerable autonomy in implementing a major policy.

In September 1971, newly discovered technical difficulties would severely threaten the project’s future. Roughly, 20 oil and gas boreholes in the area were found to be impossible to plug, and the unexpected disappearance of water from a nearby solution mining operation raised many questions about the geologic integrity of the salt domes for storing liquid nuclear waste. In February 1972, the AEC withdrew from further operations at the Lyons site, citing technical uncertainties and problems with political and public acceptance.

In the 1980s, Kansas refused to issue a permit for low-level nuclear waste to a new contractor. The shaft was permanently sealed in December 1994. (Though this article does not concern waste from the DOE defense program, it should be noted that transuranic radioactive waste from that program (and from nuclear power generation) has been transported to and stored at the Waste Isolation Pilot Plant near Carlsbad, N.M., since March 1999. That geological repository is in the Permian Salt Basin.)

In Part III we look at the rise and fall of Yucca Mountain and the how dry-cask storage is now used to store spent nuclear fuel.

Portions of this post were first published in POWER magazine and co-authored with Contributing Editor James Hylko.