[Ken Glozer’s new book, Corn Ethanol: Who Pays, Who Benefits?, sponsored and published by Hoover University Press, will be released this month. Mr. Glozer is president of OMB Professionals, a Washington, D. C. based energy consulting firm. He was a senior executive service career professional with the White House Office of Management and Budget in the energy, environment, and agriculture area for 26 years.] 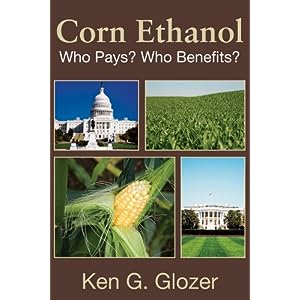 My new book provides detailed a political history of how the United States ended up with current federal corn ethanol policy.

Part I relates the significant external events that have driven the politics that in turn has driven the policy since 1977. I address important questions about when the policy started, how it evolved, what were the major political and market forces that drove it, and, most important, who were the key officials that formed and shaped the policy.

The book evaluates the Renewal Fuels Standard (RFS), which was first enacted in 1975 then doubled, to a mandatory 15 billion gallons of corn ethanol blended into the nation’s gasoline supplies. The surprising finding—that federal ethanol policy has little to do with energy and everything to do with wealth transfer—is particularly compelling because, after three decades of federal subsidies, trade protection and most recently mandated ethanol blending, ethanol remains uneconomical.

According to the Department of Energy’s Energy Information Administration, ethanol never has and never will have a significant impact on petroleum imports compared to what could be achieved under a competitive market policy. Thus my sober conclusion: taxpayers and consumers are the victims of the current policy in that they have no choice but to pay and pay.

In recent years, the powerful U.S. economy has stumbled, and its economic core and wealth have diminished. It is therefore essential that American political leadership recognize the importance of designing and implementing cost-effective and environmentally sound policies and programs that complement and promote the market-based economy that has given Americans a high level of prosperity since the end of World War II. Competitive markets have served this nation well during this period, and competitive market policies should be supplanted only when more effective ones are found and proved.

But in the first decade of the twenty-first century, the George W. Bush administration, the Obama administration, and Congress have become enamored with a federal mandate, subsidy, and trade protection policy for corn ethanol. Federal energy subsidies for petroleum date back to the early 1900s, but as documented by two Department of Energy/Energy Information Administration reports, the rate of growth of federal energy subsidies spending is alarming.

Further, these massive and deep subsidies (grants, spending, tax credits, etc.) have been coupled with quantitative, fuel-specific mandates—the Renewal Fuels Standard (RFS) for gasoline—enacted in 2005, then doubled in 2007. This policy is a major federal-market intervention that seriously compromises and impairs a competitive market—much like the ill-fated federal-petroleum allocation and price controls of the 1970s first imposed by the Nixon administration and extended by Presidents Ford and Carter.

The RFS policy is not based on any objective empirical evidence that it works and that it is more effective than a competitive market policy in achieving either energy security or environmental goals.

It is therefore important to have access to the best, most objective information on whether this subsidies/mandate/trade protection policy works. The RFS has existed for more than three years, and there is now enough information to evaluate whether the policy in fact meets the claims made by its advocates.…

After completing a comprehensive review of the most important claims made by the advocates for federal ethanol policy, in this author’s view the policy has little to do with energy and a lot to do with wealth transfer. Only one of the claims was found to be true: the policy does create jobs in rural areas, mainly the top ten producing states.

All other claims investigated were found to be questionable or not correct. The evidence used by the responsible federal agencies (Department of Energy, Department of Agriculture, Environmental Protection Agency) to justify the policy was found to be flawed. Even though the policy in its current form is nearly four years old (dating from the Energy Policy Act of 2005), the agencies continue to use these flawed claims to support it. The lone exception: the recently published EPA proposed regulation for the Renewable Fuels Standard.

The facts and reasons supporting the author’s conclusion were presented in Chapters 3 and 4.

First and foremost, current policy does not, based on EIA’s forecast, significantly increase domestic transportation-fuel supplies over the quantity that would be developed by a competitive market policy. You can get two-thirds the level of ethanol use in the United States without a RFS mandate, a 45 cent-per-gallon tax subsidy, corn and soybean subsidies, and an import fee on ethanol imports.

Second, current policy already has made, and will continue to make, massive wealth transfers from federal taxpayers, gasoline consumers, and food consumers to corn and soybean farmers and ethanol producers. Over $500 billion dollars in costs, it is estimated, have been or will be incurred from 2008 to 2017. The primary beneficiaries are the owners and/or operators of an estimated 270,000 corn and soybean farms located in ten Midwestern states.

Third, the large corn/soybean farms, farmers in these states reap the majority of the benefits. Large farm owners and operators in Iowa, for example, took in or will take in on average an estimated $4.3 million from 2008 to 2017.

Fourth, there is no end game for the policy. Even after thirty years of ethanol subsidies (more than seventy years for corn), the wealth transfer continues year in and year out. The policy gives every appearance of being permanent, despite the fact that it has never—and will never—produce the claimed benefits except for the increases in rural employment.

Fifth, a 2009 CBO report concluded: “It is unlikely that, on average, over the past several decades ethanol producers would have turned a profit if they had not received production subsidies.” That conclusion is compelling, if not startling, because after three decades of federal subsidies, ethanol remains uneconomic—even with the subsidies—as evidenced by the spate of ethanol-related bankruptcies and plant shutdowns in the past year.

Sixth, the safety hazards and costs of transporting the billions of gallons of ethanol produced in the Midwest to the east, gulf and west coasts mainly by rail are of major concern. Rail accidents involving ethanol tank car derailments, explosions and fires are inevitable. An event in Illinois involved tank cars of ethanol exploding and bursting into flames, killing one person and injuring several others.

Finally, under current federal ethanol policy the estimated federal budget cost for each incremental gallon of ethanol produced (on a petroleum equivalent basis) compared to a competitive market policy is $5.91 per gallon or $248.22 per barrel. At this rate to reduce U.S. petroleum imports by two million barrels per day or about 20 percent would cost over $181 billion annually just in taxpayer subsidies.