Estimating Costs of Deep Decarbonization (California and beyond)

“The term ‘buyer beware’ might provide an appropriate warning; but that term implies the buyer has a choice.  Therefore, we will just leave it ‘beware’.”

The purpose of this document is to provide a rough estimate for some of the economic costs of moving American consumers away from the direct use of fossil fuels per the objective of “deep decarbonization” and show the math involved. First, we need to define what “deep decarbonization” and “electrification” are.  “Deep Decarbonization” is the term-of-art for climate stabilization through the decarbonization of the World’s energy systems. Replacing consumers direct consumption of natural gas and gasoline, along with other forms of fossil fuels, and on to renewable-dominated electricity, is the means of achieving this global objective.

The concept officially started with a June 2015 G-7 goal “to end their dependence on fossil fuels.” In December 2015, the United Nations Climate Change Conference (COP21) adopted this goal. In November 2016, “Deep Decarbonization” was put forth by President Obama as official U.S. policy.  Excerpt:

With a clean electricity system comes opportunities to reduce fossil fuel usage in these sectors: for example, electric vehicles displace petroleum use and electric heat pumps avoid the use of natural gas and oil for space and water heating in buildings.

On February 14, 2018, the Natural Resources Defense Council and the Edison Electric Institute entered into a pact to promote “deep decarbonization” through “beneficial electrification.” The basis of this pact for weaning (or forcing) consumers off “dirty” fossil fuel consumption and on to “clean” renewables needs a serious reality check before “betting the farm” on it; like California seems intent on doing (among other places). Why? Deep decarbonization through electrification is astoundingly expensive.

Additionally, in many climates, there are cold weather emergencies that routinely kill people.  This pact would more than likely compound such problems. At a minimum, the forced conversion from the direct use of natural gas to electricity will impose massive additional costs upon energy consumers.

Converting fossil Btu’s into electricity isn’t 100% efficient.  It’s only about 33% to 50% efficient. And neither is getting electricity from the power plant to the consumer 100% efficient. Additionally, it is standard practice to provide some extra generation capacity in reserve to insure reliability. At a minimum, add another 15% for reserve capacity and line losses to 1,140GW. That’s 1,311 GW in total.

According to the Energy Information Administration (EIA), “At the end of 2017, the United States had about 1,084,783 MW.” Subsequently, adding 1,311 GW more than doubles the present U.S. installed electric generation capacity.

According to a study from the University of Texas at Austin titled “The old, dirty, creaky US electric grid would cost $5 trillion to replace,”  the present system is in need of a major overhaul. And that cost is estimated at $5 Trillion for an up-to-date but basic system.  So, lets also call it $5 trillion (conservatively) for non-exotic capacity to replace just the residential/commercial direct use of natural gas.  Note: This is without overhauling the existing “old, dirty, creaky” (carbon-intensive) electrical system.

As portrayed by the following graph, according to the latest EPA “Inventory of U.S. Greenhouse Gas Emissions and Sinks,” commercial and residential greenhouse gas emissions were only 11 percent of the total in 2016: 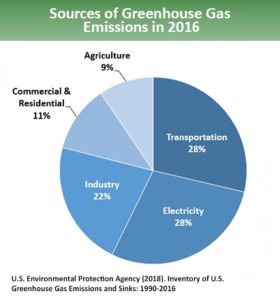 As shown above, electricity generation and transportation are the major sources of greenhouse gas emissions in this country. This observation gives rise to some interesting questions such as:

For question 1, arguably at least, putting in wind and solar (rather than coal and gas) is starting to decarbonize the electric grid.  However, intermittent wind and solar need back-up (which is usually gas).  Moreover, nearly all reduced carbon emissions for the grid is from switching from coal to gas; not from coal and/or gas to renewables.

Electric vehicles are also being promoted based on reduced carbon in the transportation sector.  However, this is really a transfer of carbon emissions from transportation to electricity. How much net carbon is ultimately reduced is a function of the future electrical generation mix and the economics thereof.

For question 2, we haven’t estimated the total cost of deep decarbonization yet; but obviously, $5 Trillion is only the tip of the iceberg. Furthermore, these costs estimates are for just for capital expenditures. Fuel and O&M should also be factored-in. To remain conservative, we are not including these costs in this analysis now.

These costs are likely to be primarily recovered by electric utilities through a combination of massive increases in electricity usage and tariff (rate) increases. But advocates for deep decarbonization in the U.S. claim that overall utility bill increases will be manageable, as portrayed by the following graphic: 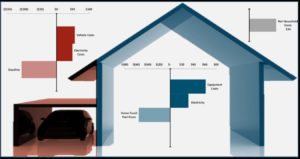 Source:  Policy Implications of Deep Decarbonization in the United States

Consumer-side of the Meter: Additional Costs

So far, we’ve only addressed cost increases associated with adding electricity infrastructure (on the utility side of the meter).  On the consumer sides of the meter are more costs.  According to a recent study funded by the California Building Industry Association (CBIA) titled “Cost of Residential Electrification,” key findings included the following:

In 2017, there were 126.22 million households in the United States. At $7,200 per household, this equates to $0.9 Trillion.  Assuming an equal amount of expenses for converting the commercial sector, call it $1.8 Trillion for now.

Beyond these costs are stranded asset costs for gas utilities and miscellaneous consumer costs such as:

We don’t have a comprehensive estimate of what “deep decarbonization” might cost in total yet. But we’re working on it.  A planned follow-up spreadsheet tool will allow for user-defined estimating and “what-if” analyses of such details. We think this should take about 6 months. We will keep you posted.

Note: Even $24.8 Trillion might not be a worst-case scenario. This is because cold weather emergencies, such as “polar vortexes” and/or “bomb cyclones,” are limited within temperate California. Replacing such heating peak loads solely with electricity (especially renewable electricity) would drive costs considerably higher.

In closing, the term “buyer beware” might provide an appropriate warning; but that term implies the buyer has a choice.  Therefore, we will just leave it “beware.”