“The diversion of the associated massive investment of national wealth away from mitigation to adaption policies is most likely our best chance of meeting all the other major threats to humanity, many of which are more ‘clear and present’ than global warming.”

How are the vast majority of us to assess the claims of problematic global warming and mandated responses? At present, we are simply being told by ‘experts’ what is happening, and what we must do about it. The task of properly assessing climate issues is very complex, and individually we do not have the time to devote to the immense task of properly doing this.

One helpful approach is a simple decision tree model to evaluate policy options for global warming that has been published by Michael Cochrane, whose background includes a Ph.D. in Engineering Management and Systems Engineering. He is the founder of Value Function Analysis, a consulting firm that helps clients achieve their objectives by assisting them to think about their values, according to this recent posting of his analysis.

The usefulness of this approach is that it is easy to understand the relative value of a range of policy options at a high level of consideration. Does it oversimplify the discussion? Certainly it does, but it is an interesting “litmus test.”

At present, one policy option dominates in the belief that problematic global warming is occurring, humans are causing it, and we can relatively easily take actions to avoid (mitigate) it. This analysis should give pause and reconsideration of this persistently pursued policy, because of its expensive nature coupled with a low probability of its being necessary or effective, as the decision model indicates.

The term ‘climate change’ has not been used here but can be taken to mean the first column of Table 1. 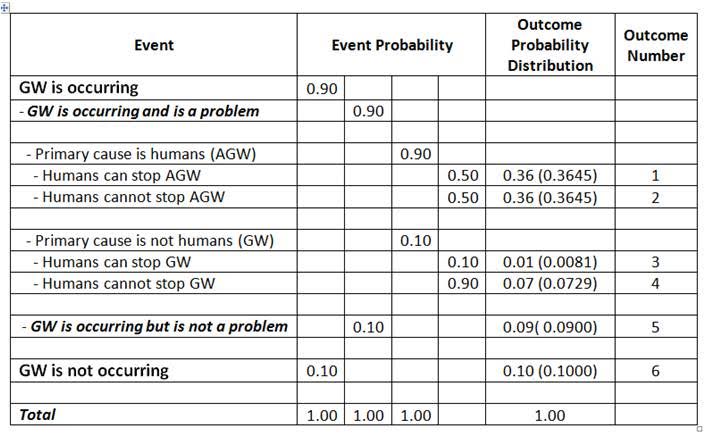 Cochrane then shows how these outcomes can be grouped under the four possible general policy responses which are:

• Continue with the current mitigation policies, which assume global warming is expected to be problematic, is human-caused, and can be stopped. These include extensive implementation of wind and solar generation plants; various forms of carbon taxes, including cap and trade schemes; energy efficiency and conservation measures (including questionable implementation of ‘smart’ meters); and subsidizing electric cars.
• Take measures to adapt to global warming that may become problematic, whether human caused or not.
• Start a massive research and development program to mitigate global warming on the basis that it is expected to be problematic but not human caused.
• Take no action because global warming is not occurring or not problematic.

Cochrane then groups the decision tree outcomes under the appropriate policy option. This is shown in Table 2 ranked by the relative likelihood of the outcome of the modelled events.

Adaption wins out over mitigation policies regardless of the assumed very high probabilities that global warming is occurring, is problematic and caused by humans. Why mitigation is not in first place is largely on the basis that the model shows that humans cannot stop global warming:

• Even if a high 50 per cent chance is assumed that humans are able to stop human-caused global warming. This is clearly high because it inherently assumes current policies can succeed. However, the extreme measures required to ensure ‘success’ would be difficult to accept, and this will be explained below.
• Even if the probability of problematic non-human caused global warming is quite low, the probability that humans cannot stop it is high.

Even so, it can be argued that policy makers might have a hard time choosing between the adaption and mitigation options. Each would require substantial investments and it is unlikely that both could be properly pursued at the same time. The combined costs, multiples of trillions of dollars, would be almost certainly politically, if not economically, unacceptable.

I suggest that Table 2 represents the best case that could be made for mitigation on the assumption that global warming is caused by humans and is assigned a relatively high chance of being fixed (in this case 50%) as current policy trends claim. I have shown the difficulty, if not impossibility, of current renewable energy policies accomplishing this here.

The reductions that are claimed necessary by climate activists would require substantially more aggressive policies than now being promoted and include:

• Substantial and likely extremely unpopular, conservation measures involving a very high reduction in energy use. Measures that have the effect of increasing energy prices to users, such as very high carbon taxes and rationing (through smart meters) are approaches that could achieve this.
• Greatly increased implementation of nuclear energy in electricity generation.
• Rapid electrification of transportation.

The first two would be very difficult politically, if not impossible, in developed countries, and the first similarly difficult in developing countries.

The electrification of transportation to the degree required, although desirable, will take considerable time as it is an immense undertaking involving a massive re-alignment of:

Another aspect is the primary energy use behind the electricity production. It is difficult to see how emissions reduction is possible without substantial increases in nuclear electricity generation. For example in Germany, nuclear is being phased out along with a notable increase in the use of coal in electricity generation, so policies putting more electric cars on the road would not reduce emissions, but simply transfer them to a different emissions producing primary energy source. This is a characteristic of much of the current policy proposals, especially unilateral carbon taxing in all forms.

I suggest that a number of Cochrane’s probabilities are not realistic—especially the high individual probabilities of global warming occurring, is a problem, and is caused by humans—which are all 90 per cent.

Wait a minute you say. Isn’t it true that almost all the top climate scientists agree that problematic, human-caused global warming is certainly the case? I would agree that this is how it is represented politically, and by the many climate-activist organizations (including the IPCC) and individuals; they also advocate simplistic and apparently easy (not apparently intrusive) mitigation policies. The simple answer is that I would suggest that you investigate the basis for these claims, which unfortunately is a very long and complex process. So, in the absence of the time or inclination for such an investigation, I suggest a healthy dose of reasonable scepticism is in order for the vast majority of us.

As a result, the suggested changes to the individual probabilities shown in Table 3 are appropriate to a more balanced, realistic and instructive view of the policy options. 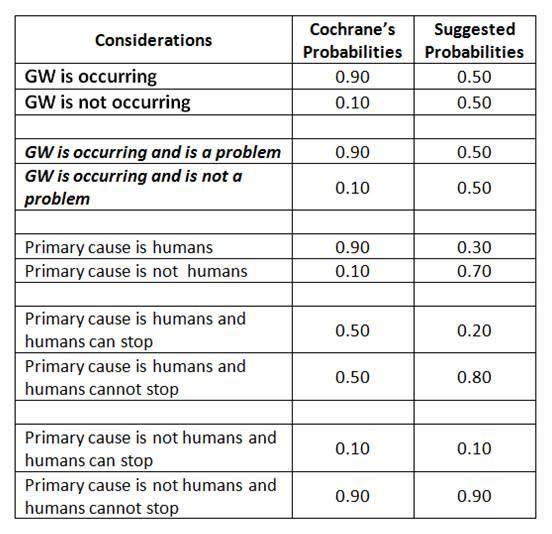 • GW Occurring/Not Occurring – Cochrane’s comments do not support the 0.90/0.10 probabilities he uses. That aside, although there may be a general publication bias in favour of GW occurring, I suggest that arguments on both sides are such that we are not really sure of either. Given the complexity of the question I suggest that a 0.50/0.50 allocation is realistically conservative. For more information on this click on ‘Climate Change’ under ‘Featured Categories’.

• GW is a Problem/Not a Problem – Cochrane’s comments do not support the 0.90/0.10 probabilities he uses here as well. The same argument as above suggests a 0.50/0.50 allocation.

• Primary Cause is Humans/Not Humans – Cochrane says, ‘This question gets at the heart of the problem’. Again, his comments do not support a 0.90/0.10 allocation. My first reaction is to simply reverse these because of the overall effect of human activities versus the likely more powerful natural ones, such as solar activity. I suggest a careful reader of details behind published information (again ignoring any publishing bias) would be unconvinced either way on this issue. Is a 0.50/0.50 allocation fair? Leaning to natural causes, I suggest a compromise at 0.30/0.70.

• Primary Cause is Humans and Humans Can Stop/Humans Cannot Stop – Here Cochrane chooses 0.50/0.50 and I can understand this choice given his reasoning. But here I disagree that this is feasible except for very aggressive and intrusive and unwelcome measures as described above. I believe I am generous in assigning even a 20 per cent chance of success.

• Primary Cause is not Humans and Humans Can Stop/Humans Cannot Stop – This is the most realistic of Cochrane’s allocations at 0.10/0.90. I suspect that 0.01/0.99 or even lower is more realistic but choose to leave Cochrane’s untouched.

Cochrane provides a sensitivity analyses for the event probabilities he used to address these considerations, but their significance might easily be lost in this approach, and his results as shown in Table 2 above could be the main “take away” for readers. Perhaps the application of the adjusted event probabilities more clearly represents the ranking of policy options as shown in Table 4.

This suggests that it is highly unlikely that there is the need for the policy responses currently believed to be necessary and being aggressively pursued. So, we are most likely on the wrong path today with a probability of success that is very close to zero.

Although a “no response” policy is strongly indicated, based on the second ranking of adaption, we may we deem it advisable to initiate appropriate actions to deal with the chance of problematic global warming, whatever the cause. This could involve the following initiatives, which are not intended as a complete list:

• Widespread desalination and distribution of water, both of which would require substantial energy input.
• Improvement of housing conditions and health care in all countries.
• Aggressive electrification where there is little or no availability now. This would enable the wide-spread capabilities for such as food storage and preparation, improved health and education facilities, employment opportunities, and air conditioning.
• Needed changes in global food systems.
• Arrangements to accommodate large population migrations if necessary.

For some thoughts on adaption to global warming see here and here.

All of these examples, along with many other possible adaption approaches, would likely have overlapping benefits in policy areas outside of global warming.

Regardless of arguments over the specifics of some of the considerations discussed here and the “no response” policy outcome, the diversion of the associated massive investment of national wealth away from mitigation to adaption policies is most likely our best chance of meeting all the other major threats to humanity, many of which are more ‘clear and present’ than global warming.