The international global-warming theater is again in session. The doomed-from-the-start, out-of-time Kyoto Protocol of 2007 (“this agreement will be good for Enron stock!“) was followed by the failure of the Copenhagen Summit in 2009. The frequent flyers are now in Warsaw in hopes of making progress towards the Paris, France finale in December 2015 for a global agreement to–in the United Nations’ formulation–keep global temperatures from rising beyond 2 degrees Celsius above preindustrial levels.

To say that the confab is off to a slow start is an understatement. First, Poland (the sponsoring country) held a two day conference touting its home grown coal industry. Australia is on track to eliminate its “socialistic” carbon tax and cutting ‘green’ energy subsidies. And Japan declared its intention to deemphasize its CO2 reduction plans, adding “gloom” to the Warsaw conference.

All this comes on top of an inconvenient truth: European countries have failed to reduce CO2 emissions despite huge efforts that have impoverished electricity users and national treasuries.

In what the mainstream media already calls an exercise in “rich countries act, everyone else gets money,” don’t expect much out of Warsaw except for tensions, contradictions, and redistributionist scheming.

The Guardian reports from the climate summit in Warsaw, Poland:

U.S. officials fear that international climate change talks will become focused on payouts for damage caused by extreme weather events exacerbated by global warming, such as the category 5 Typhoon Haiyan that hit the Philippines last week killing thousands of people and causing what is expected to be billions of pounds of damage.

An official US briefing document obtained by the Guardian reveals that the country is worried the UN negotiations, currently under way in Warsaw, will “focus increasingly on blame and liability” and poor nations will be “seeking redress for climate damages from sea level rise, droughts, powerful storms and other adverse impacts.”

At last year’s climate talks in Doha, the US fought off calls from African nations, the Pacific Islands and less developed nations for a ‘loss and damage mechanism’ to channel finance to help nations cope with losses resulting from climate change, such as reduced crop production due to higher temperatures.

Not that this is anything new. As I reported in the Cornwall Alliance Newsletter three years ago:

German economist Ottmar Edenhofer, an official with [actually a co-chairman of] the Intergovernmental Panel on Climate Change, said in an interview with Neue Zürcher Zeitung on November 14: “… it’s a big mistake to discuss climate policy separately from the major themes of globalization. The climate summit in Cancun at the end of the month is not a climate conference, but one of the largest economic conferences since the Second World War. … we redistribute de facto the world’s wealth by climate policy. … One has to free oneself from the illusion that international climate policy is environmental policy. This has almost nothing to do with environmental policy anymore ….”

The reason? Edenhofer explains: “causes of climate change lie in the north and the consequences in the south.” Consequently, “one cannot solve the climate problem alone, but it has to be linked to other problems. There must be penalties and incentives: global CO2-tariffs and technology transfer.” I.e., for the climate change it’s allegedly already caused, the developed world’s got to pay the developing world—and the bill will be trillions of dollars.

Now back to the present. The Guardian continues:

The member nations of the G77+China, which includes most African and some Latin American countries, cannot leave Warsaw without agreement on a loss and damage mechanism, said G77 lead negotiator Juan Hoffmaister.

“We can’t only rely on ad-hoc humanitarian aid given the reality that major climate-related disasters are becoming the new normal,” Hoffmaister said (emphasis added).

Compare that with Intergovernmental Panel on Climate Change, Working Group I, Fifth Assessment Report, released at the end of September: “Current datasets indicate no significant observed trends in global tropical cyclone frequency over the past century …. No robust trends in annual numbers of tropical storms, hurricanes and major hurricanes counts have been identified over the past 100 years in the North Atlantic basin. … In summary, confidence in large scale changes in the intensity of extreme extratropical cyclones since 1900 is low.”

And compare it with these other conclusions in AR5 (collected by Roger Pielke Jr., professor of environmental studies at the Center for Science and Technology Policy Research at the University of Colorado at Boulder):

· “Overall, the most robust global changes in climate extremes are seen in measures of daily temperature, including to some extent, heat waves. Precipitation extremes also appear to be increasing, but there is large spatial variability.”

· “There is limited evidence of changes in extremes associated with other climate variables since the mid-20th century.”

· “Current datasets indicate no significant observed trends in global tropical cyclone frequency over the past century … No robust trends in annual numbers of tropical storms, hurricanes and major hurricanes counts have been identified over the past 100 years in the North Atlantic basin.”

· “In summary, there continues to be a lack of evidence and thus low confidence regarding the sign of trend in the magnitude and/or frequency of floods on a global scale.”

· “In summary, there is low confidence in observed trends in small-scale severe weather phenomena such as hail and thunderstorms because of historical data inhomogeneities and inadequacies in monitoring systems.”

· “In summary, the current assessment concludes that there is not enough evidence at present to suggest more than low confidence in a global-scale observed trend in drought or dryness (lack of rainfall) since the middle of the 20th century due to lack of direct observations, geographical inconsistencies in the trends, and dependencies of inferred trends on the index choice. Based on updated studies, AR4 conclusions regarding global increasing trends in drought since the 1970s were probably overstated. However, it is likely that the frequency and intensity of drought has increased in the Mediterranean and West Africa and decreased in central North America and north-west Australia since 1950.”

· “In summary, confidence in large scale changes in the intensity of extreme extratropical cyclones since 1900 is low.”

1. The IPCC is a reliable authority on climate change, so we should all believe its declaration, in AR5’s Summary for Policymakers, that it is “extremely likely” (95%+ confidence level) that human activity has caused “more than half” of the global warming since 1950, on the basis of which we should all be terrified, and developing nations have a claim to restitution from developed nations for climate damage caused by AGW?

2. Or the IPCC is a reliable authority on climate change, so we should all believe that AGW isn’t driving significant changes in extreme weather events, and so we should not fear and developing nations have no claim to restitution from developed nations for climate damage caused by AGW? (Earth to climate summit in Warsaw: Get your message straight.)

3. Or perhaps the IPCC, relying as it does on computer climate models that fail miserably to predict global temperature over the past 30 years, just isn’t a reliable authority on climate change? 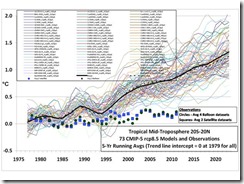 B. Why on earth would anyone believe the whole climate treaty process is anything other than precisely what IPCC co-chairman and climate summiteer Edenhofer, not criticizing but praising, called it: