“The [EPA] Proposal ignores the obvious association between increased GHG emissions and positive health and welfare benefits. GHG emissions and improving quality of life are associated because the economy runs on energy, and that energy is principally derived from fossil fuels.”

Several detailed and extensive comments were submitted to the U.S. Environmental Protection Agency (EPA) regarding their proposed Standards of Performance for Greenhouse Gas Emissions for New Stationary Sources: Electric Utility Generating Units documenting new and influential science that the EPA did not assess when issuing the proposed standards. Instead, EPA simply deferred to their Endangerment Finding that they issued in December 2009.

As yesterday’s post pointed out, a lot is new in the rapidly evolving field of climate (change) science, and thus the EPA Endangerment Finding is getting a bit stale—or should I say becoming “endangered.” A reassessment is sorely in order. After all, how long can you base new regulations on old science?

Here, I examine another aspect of the issue that was largely overlooked by the EPA—the benefits (not only costs) of manmade greenhouse gas (GHG) emissions. Several commentors point to the good to the public health and welfare that came about as a result of human greenhouse gas emissions—or more specifically, the energy whose production gave rise to the GHG emissions.

One such commentor was Peabody Energy Company, the world’s largest private-sector coal company and a “leader in sustainable mining and clean coal solutions.” Peabody wanted to make darn sure that the EPA recognized not only that access to fossil-fuel produced energy that improved peoples’ lives, but also that limiting access to it, as proposed by the EPA, would result in negative consequences to public health and welfare—the very thing that the EPA’s regulations were crafted to avoid.

Here I excerpt the section from Peabody Energy Company’s rather extensive comment to the EPA in which they lay out the basics for how GHG emissions are associated with public health benefits rather than impairment as concluded by the EPA. Couple these with other positive externalities from carbon dioxide and modest GHG-induced climate change, and it isn’t hard to see why the EPA’s 2009 Endangerment Finding is out of date and out of touch.

Excerpt of the Comment from Peabody Energy Company to the EPA concerning their proposed Standards of Performance for Greenhouse Gas Emissions for New Stationary Sources: Electric Utility Generating Units:

The NSPS Proposal ignores the obvious association between increased GHG emissions and positive health and welfare benefits. GHG emissions and improving quality of life are associated because the economy runs on energy, and that energy is principally derived from fossil fuels.

The fallacy in EPA’s approach is shown by the conclusion in the preamble of the NSPS Proposal that atmospheric concentrations of GHGs are presently causing unprecedented warming both in the U.S. and worldwide and that this warming is now resulting in substantial damage to American health and welfare. EPA’s view misses the obvious fact that public health and welfare has been improving notwithstanding the state of the climate which is always changing.

Historically, fossil fueled-energy usage has produced dramatic health and welfare benefit, particularly as a result of the large-scale introduction of electricity. Quality of life and access to electricity are not coincidental. Electricity is the sine qua non of modern society. In 1999, the U.S. Academy of Engineering identified societal electrification as the “most significant engineering achievement” of the past century – a century which saw population growth of over four billion people, the rise of the metropolis, dramatic improvements in diet and health and emergence of a vast system of electronic communication.

The rise in the standard of living in the U.S. over the past century has been the envy of the world. Society after society seeks to emulate the progress the U.S. has made in health, education, productivity, environmental improvement, and science and technology. The foundation of this leap forward is the ever increasing access to reliable and affordable electricity.**

Electricity has become unique and pervasive in the American lifestyle. Over the eight year period 2001-2009 alone, for example, U.S. households added 36 million air conditioners, 12 million electric dryers, and 8 million refrigerators. Electricity can be employed in ways no other energy form can be used: It is high quality and therefore convertible to virtually any energy service; it permits previously unattainable precision, control, and speed; it provides temperature and energy density far greater than attainable from standard fuels; and, it has no inertia and so allows instantaneous access and is 100% convertible to work. For these reasons, readily available, affordable electricity is essential to increases in quality of life and economic wellbeing. Consider the following benefits that energy usage in general and electricity specifically have brought about:

There is a demonstrated link between low energy costs, economic growth and declining mortality over recent centuries. Brenner, Journal of Epidemiology (2005). Growing access to electricity meant more food, cleaner water, new medicines, safer work settings, and increased control of the environment through heating and, eventually, air conditioning – all hallmarks of industrialization and modernization made possible by electric power. Prior to widespread available electricity, for example, Americans’ average life expectancy in 1900 was 47 years. By 2000, life expectancy in the U.S. was 77 years.

Prior to widespread available electricity in the U.S., in 1900 just 19% of American females graduated from college and 11% of Americans were illiterate. The typical housewife spent over 60 hours a week cooking, cleaning, and doing laundry. By 1970, electricity and electricity-based appliances were readily accessible and the illiteracy rate had dropped to less than 1%. As labor-saving electricity became pervasive in society, the percentage of children enrolled in school doubled, and the number of women who could study and work outside the home increased greatly, so that by 2000, 57% of American women graduated from college.

The impact of electricity access on sanitation and cleaner water is especially noteworthy. In 1940, 45% of the homes did not have complete plumbing facilities and 35% had no flush toilet. By 1960, electricity consumption at greatly increased, power was widely available and 84% of the homes had complete plumbing facilities and 90% had flush toilets. Better sanitation had a markedly positive impact on decreasing the incidence of waterborne diseases.

There is a strong positive correlation between economic output and energy use, which reflects GHG emissions. The growth in GHG emissions, however, has been less than the rate of growth in GDP. For example, during the 1950s real GDP grew at a 4% annual rate while CO2 emissions from energy rose 2.4%. From 1960 to 1973, the growth rates were 4.1 and 3.7% respectively. CO2 emissions increased only 0.7% from 1974 to 1986 while GDP growth slowed to 2.8%. During the next two decades from 1987 to 2007, GDP rose nearly 3% per annum while CO2 emissions grew 1.2% per year. So as the economy grows, carbon intensity, defined as CO2 per dollar of GDP, falls. 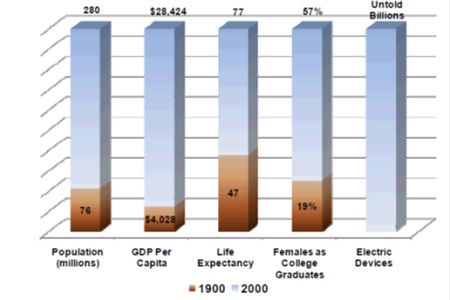 The benefits provided from electricity could not have been made possible without the use of fossil fuels. Consumers prefer low cost, reliable power and producers who provide these services prosper. The fact that the U.S. economy currently derives 85% of its total energy from coal, oil and natural gas is a testament to the availability and competitive advantage of fossil fuels.

Of course, the use of fossil fuels for energy produces GHG emissions, and these emissions are believed by EPA to produce changes in climate that could impair public health or welfare. But EPA’s view of these climate change effects must be balanced by an appreciation of the benefits the energy creates. Consider what America looked like before electrification:

The benefits of electricity are even more pronounced when we consider current global conditions. More than 1.5 billion people have no electricity. Another 2 billion have extremely limited access. In essence, about 3.5 billion people – almost 12 times the population of the U.S. – have either no electricity or only a constrained supply. As shown by the following chart, this lack of access to electricity is directly correlated with quality of life. 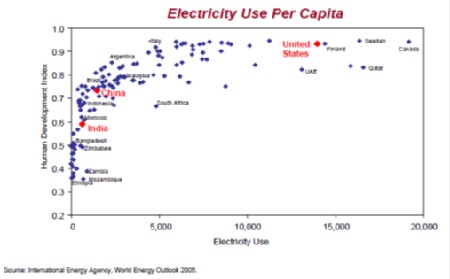 The human and economic consequences of these differences in access are stark indeed. In Germany, the per capita Gross National Income is $36,810. In India, it is $820. In Germany, a new baby can expect to live almost 80 years, in India only 64. In Germany, there is virtually no child malnourishment. In India, about half the children are malnourished and tens of millions are classified as “stunted.”

To further demonstrate the consequences of the broad divide in electricity access, compare two sets of countries: (a) the Euro nations (populations where the average consumer uses about 7000 kWh) and (b) a set of 17 countries which have the least access to electricity – none of the 17 uses more than 600 kWh/y per person and the average is 242 kWh. The results demonstrate the grim reality of life without electricity. 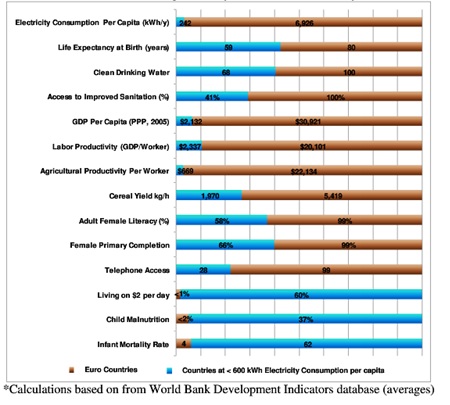 ** Unless otherwise noted, all citations in this section of the comments are to Clemente, More People, Living Longer, Living Better, on file with EPA as a part of Peabody’s comments in Docket ID No. EPA–HQ–OAR–2009–0171.