“No matter how much you pay with a carbon levy, virtually nothing is received climatically…. No matter the level of domestic action that we take, it will pale in comparison to the rapid expansion of carbon dioxide emissions in other parts of the world.”

How much global warming will result from U.S. emissions over the course of this century, and how much of that could be prevented by a carbon tax? These two questions have the same simple answer—virtually none. One or two tenths of a degree a century out with–and without–a carbon tax makes the whole climate debate a peculiar exercise.

The Intergovernmental Panel on Climate Change (IPCC) estimates that the earth’s average temperature will increase somewhere between 1.1°C and 6.4°C over the 21st century, depending on the assumed pathway of anthropogenic emissions (both greenhouse gases and aerosols) and the actual (but unknown) climate sensitivity.

A temperature rise towards the low end of this range is not worth worrying too much about (the ‘lukewarming’ position), while a rise near the higher end of the range is potentially much more problematic (the alarmist position). And while lukewarmers and alarmists stray apart when it comes to the amount of climate change they are expecting, they are bound together by the fact that there is practically nothing that can be done to change the situation, either way. Why? They use the same math.

But you won’t hear many alarmists admitting to that fact—if they did, you would never have heard of the terms like “cap-and-trade” or “carbon tax.” Instead, you’d be much more familiar with words like “planning” and “adaptation.”

How Much U.S.-Side Global Warming?

Lest alarmists protest, let’s work through the numbers to see just how much “global warming” is being caused by U.S. economic activity.

In other words, how much of the IPCC’s projected 1.1°C to 6.4°C of warming will the U.S. be responsible for in the next century? The answer is about 0.08°C of the low end estimate and about 0.35°C of the high end estimate (according to an IPCC-like analysis*). Using the IPCC’s mid-range scenario, carbon dioxide emissions from the U.S. contribute about 0.19°C of the total 2.96°C global temperature rise.

Yep, that is it. For all the incessant talk as to how the highly consumptive U.S. lifestyle—from SUVs, to air conditioners, to big screen TVs and huge portion sizes—is leading climate catastrophe, the sum total of our contribution to “global warming” this century will amount to the neighborhood of about 0.2°C. Not five degrees. Not two degrees. But about two-tenths of a degree Celsius. And even this number may be on the high side if the climate sensitivity is lower than about 3°C (see here for more on recent findings concerning the climate sensitivity).

When considering any of these options, you have to ask yourself (or your representatives in Congress) how much are you willing to pay—in dollars or inconvenience, or both—to avert some portion of this 0.2°C of global temperature increase and its accompanying inconsequential and impossible to measure climate change?

No matter how much you pay with a carbon levy, virtually nothing is received climatically.

Consider the effect of the Waxman-Markey Climate Bill that was passed by the U.S. House of Representatives back in the summer of 2009. That cap-and-trade scheme was designed to step down U.S. carbon dioxide emissions ultimately by 83% by the year 2050. This would have taken a monumental effort that was sure to be disruptive in any number of ways.

The net climate result? Instead of 0.19°C of warming coming from the U.S. by the year 2100 (assuming the IPCC mid-range scenario), our contribution would have been reduced to 0.08°C—for a net “savings” of about 0.11°C of “global warming”. (See my analysis here.)  This amount is of virtually no environmental consequence and was repeatedly cited as one of the reasons that this legislation died in the Senate.

Much the same holds true for the present day fad for a carbon tax. The talk of a carbon tax—or more rightly a carbon dioxide tax—was bolstered recently by superstorm Sandy and its aftermath (widely, but wrongly, blamed on anthropogenic climate change). A tax on carbon dioxide emissions would be felt from the gas station to the grocery store and everywhere in between as virtually every aspect of our modern life benefits from cheap carbon dioxide emitting, fossil-fuel produced energy.

A carbon tax has become so trendy that even “no new tax pledge” champion Grover Norquist briefly flirted with it before quickly reconsidering.

And for good reason. For about the only thing that a carbon (dioxide) tax in the U.S. will not do, is produce a detectable mitigation of anthropogenic global warming and any associated effects. 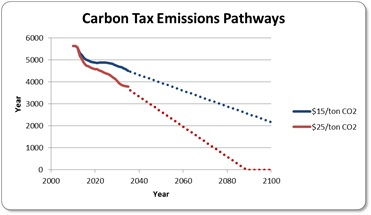 When I substitute these carbon tax pathways for U.S. carbon dioxide emissions for the one already included in the IPCC mid-range scenario, I calculate that the amount of “global warming” contributed by the U.S. drops from 0.19°C by the year 2100 to 0.13°C and 0.08°C for the $15/ton and $25/ton carbon tax respectively (Figure 2). 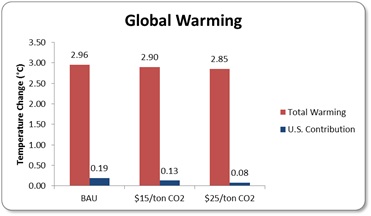 A global warming “savings” of 0.06°C to 0.11°C across this century is of no scientific consequence, while a tax of carbon dioxide emissions of $15 to $25 per ton is sure to be of significant personal consequence (and, my guess, only very temporary, i.e., until the next election cycle).

Any tax on carbon dioxide is clearly a case of not getting what you pay for. You will pay a lot, and receive nothing in return, or at least nothing that you will ever realize, or that could be proven.

What is working against any form of a carbon tax is that the U.S. plays only a minor role in the future course of global warming driven by anthropogenic activities. The rest of the world—primarily the developing countries like China and India—is where the rubber meets the road for climate change. No matter the level of domestic action that we take, it will pale in comparison to the rapid expansion of carbon dioxide emissions in other parts of the world.

Instead of trying to make an expensive repair a very small and inconsequential leak, I would think that our attention ought to be directed at determining just how big the coming flood may be, and make our plans accordingly.

I have used the Model for the Assessment of Greenhouse-gas Induced Climate Change (MAGICC) for my analysis of the effect of U.S. emissions on projected global temperature rise. MAGICC is sort of a climate model simulator that you can run from your desktop (available here). It was developed by scientists at the U.S. National Center for Atmospheric Research.

There are many parameters that can be altered when running MAGICC, including the climate sensitivity (how much warming the model produces from a doubling of CO2 concentration) and the size of the effect produced by aerosols. In all cases, I’ve chosen to use the MAGICC default settings, which represent the middle-of-the-road estimates for these parameter values (e.g., climate sensitivity equals 3.0°C).

I’ve had to make some assumptions about the U.S. emissions pathways as prescribed by the original IPCC scenarios in order to obtain the baseline U.S. emissions (unique to each scenario) to which I could apply the various emissions reduction schedules. The most common IPCC definition of its scenarios describes the future emissions, not from individual countries, but from country groupings. Therefore, I needed to back out the U.S. emissions.

To do so, I identified which country group the U.S. belonged to (the OECD90 group) and then determined the current percentage of the total group emissions that are being contributed by the United States—which turned out to be about 50%. I then assumed that this percentage remained constant over time. In other words, that the U.S. contributed 50% of the OECD90 emissions in 2000 as well as in every year between 2000 and 2100.

It is the total global emissions that are entered into MAGICC in order to produce global temperature projections. My results are largely insensitive to minor changes in these assumptions.