[Editor’s note: Part 1 of this case study addressed the false claim that wind has any appreciable impact on reducing coal-fired generation. This part focuses on the little known considerations relating to the effect on nuclear plants that must be cycled to balance wind, which counters claims that wind power improves general health.]

“Excessive baseload generation largely due to a contractual requirement to buy all available wind output might make it look like wind is supplying an increasing fraction of the energy supply (in TWh), while the nuclear supply appears to be decreasing. But in reality, the reduction in Bruce B unit output to permit this fallacy cannot be justified economically, nor is it a wise and conservative operation of a nuclear station.”

The following eight charts extracted from the Sygration website, which allows plotting of the Ontario IESO electrical generating unit performance, demonstrate that not only are wind turbines ineffective to replace coal, in actual fact, they do considerable harm to the stability of the electrical supply, and increase the risk of upset and accident at a nuclear generating station.

Each of the charts shows situations when the outputs of the Bruce B units were reduced to 550 MW. These deratings are due to surplus baseload generation, largely driven by the policy of the IESO to accept all available wind generation, even if the system does not need it, and even when it requires selling the output at high negative cost to neighbouring utilities in order to prevent an excess generation situation which would make the system frequency rise above 60 Hz, generating instability.

Contractually, Bruce Power is required to derate Bruce B units on the demand of the system operator when the system is in this surplus baseload situation. To do this, some 300 kilograms per second of live steam at about 4,000 kilopascals (250 degrees C) is dumped into the steam turbine condensers of each unit. Even to non-technical readers, this can be seen to be a large amount of energy, and not a trifling matter.

Operationally this is an undesirable situation. While the systems permit this to enable a unit to maintain electrical output during a grid upset, routine operation in this manner is undesirable as it applies higher than normal stresses to the condenser, and to the condenser discharge steam valve (CSDV) piping which is not normally in service. This increases the risk of plant upset. 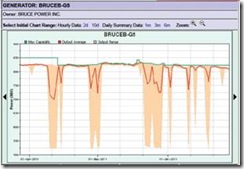 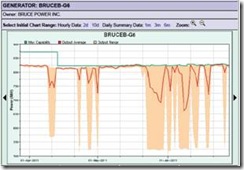 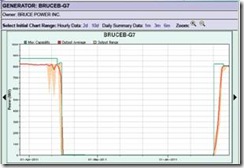 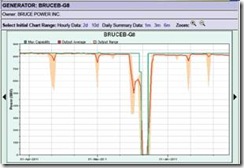 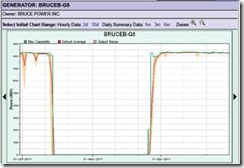 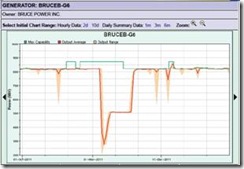 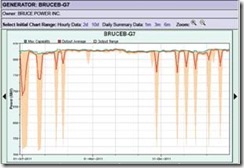 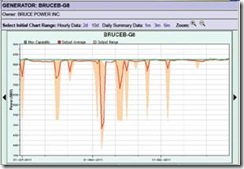 The consistent pattern of derating Bruce B units in order to avoid reducing output of wind turbine and other surplus baseload generation cannot be justified economically, nor does it constitute conservative operation of a nuclear station.

The final chart blends together the annual energy generation and the Statistics Canada data for deaths from respiratory illness and percentage of people suffering asthma. 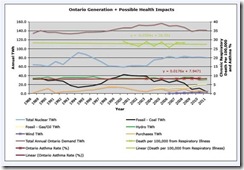 One might suspect that there would be a big drop in both adverse health effects from 2003 to 2011 due to the big reduction in coal use from 40 TWh to 4 TWh, from all we hear about the anticipated improvement in health due to shutting down coal generators.

However, looking carefully at linear regression lines for each health effect, the change in the health factors are barely discernible over the years from 2003 to 2011 that coal output was reduced from 40 TWh to 4 TWh. It hardly presents the clear linkage between coal usage and adverse health effects claimed by the Canadian Association of Physicians for the Environment (CAPE), and as repeatedly quoted by the Ministry of the Environment and Premier.

Some will argue that there is likely a lag between the reduction in coal production and impact on deaths from respiratory illness due to an integrated effect over time, while asthma rates are more impacted by the short term conditions. That argument requires additional considerations.

The first is that the Ontario Medical Association position paper on pollutants in the Southern Ontario corridor from Detroit to Quebec points out that more than 96% of the coal-fired electricity plants impacting this region are located in the United States. That suggests closing down the Ontario coal plants would have no significant effect.

Secondly, one needs to consider other factors as well, since the Statistics Canada health effects show a higher death rate from respiratory illness, and a higher asthma rate in the province of Quebec than in Ontario. Quebec has no coal fired generators, and although north of the US Northeast, the previously mentioned Ontario Medical Association paper states that the Great Lakes basin is particularly vulnerable to the impact from coal fired generating stations, which would suggest a larger influence in Ontario than Quebec.

The Statistics Canada data suggests other factors are at play, and that reduction of coal production in Ontario will not have as big as influence as suggested.

Perhaps most importantly, the health effect that the charts do not show is the effect on health caused by a drop in income that can be used to purchase good food, due to the increase in electrical utility bills. Statistics Canada lists many papers outlining the drop in general health as a family spends a higher proportion of its income on shelter and utilities. In the same years from 2003 to 2011, the cost of electrical energy in Ontario has more than doubled, and it continues to rise at an even higher rate as we bring on stream more wind turbines and other sources of green energy. But that is the subject for another study and day!

Sources of Data
The electrical data came from reports issued by Ontario Hydro (the overall authority for electricity matters in Ontario), Ontario Power Generation, Bruce Power (one of Ontario’s nuclear generation plants), the IESO, and Sygration (this is a web site that uses the IESO data to do various charting and value added operations.) The health effects data is from Statistics Canada.

A full bio of William Palmer, a professional energy engineer, is found in Part I of this series.