[Editor Note: This case study of Ontario, Canada (one of the least emissions-producing electricity systems in the world) by a veteran energy engineer uses available data to shed light on unfounded claims about industrial wind turbines. Some aspects of the Ontario situation are unique, but many considerations are applicable to all countries/states/provinces. Part II concludes this case study tomorrow.]

“Even while wind was at peak operation, the coal generators served as backup (at low load) to be able to respond rapidly to the anticipated, and actual, drop in wind output that occurred just hours later.”

It has been claimed that industrial wind turbines allow Ontario to shut down coal-fired electrical generating stations. But the facts reveal this to be a myth.

The following graph shows how Ontario has generated its electricity from 1988 to 2011. It presents a pretty clear picture of what happened from an energy point of view, showing the generation sources for each year. Energy is measured in Terra (1012) Watt hours. 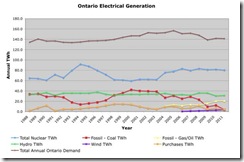 In the early 1990s (1992 and 1994, and 1995), Darlington Nuclear generating station came into service. As nuclear output increased to about 92 TWh, the coal generation dropped to about 15 TWh in 1994. Also, a slight recession was causing the Ontario electrical load to drop a bit.

In the latter 1990s, as the economy recovered some, a decision was made to lay up Bruce A and Pickering A nuclear stations, and focus limited resources on bringing the newer “B” stations at Bruce B, Pickering B, and Darlington up to a higher operational level. Nuclear generation dropped to about 60 TWh. Coal picked up the slack, rising back over 40 TWh.

By 2003, nuclear performance was improving, and in 2003 and 2004, 2 nuclear units at Pickering A and 2 more at Bruce A were brought back into service. Nuclear output started to rise, and coal usage fell correspondingly.

Also, in 2004, natural gas–fired generators started coming into service. You can see coal use dropping, as nuclear and gas generators pick up load, even though the system demand was rising, in the growing economy up to 2006. But, then, in 2007, an unexpected recession began, and the electrical load started to drop, as manufacturing- and natural resource–based jobs were lost from Ontario. You can see that load dropped in 4 years from over 155 TWh to under 140 TWh, erasing nearly 15 years of growth.

Meanwhile more natural gas generators were coming on line, and the nuclear performance was holding at about 80 TWh. Not surprisingly, the coal load fell—replaced by gas and nuclear, and with the Ontario electrical load diminished due to the falling load.

Oh, and wind; yes, you can see wind output starting to appear at the bottom of the curve in recent years, but the 4 TWh of wind output by 2011 can hardly be claimed to have replaced the 40 TWh of coal that was running up to 2003. Wind is not replacing coal from an energy (MWh) point of view.

2. Natural gas units coming on line and producing up to 20 TWh.

3. The System load dropping due to the economic crunch, dropping 15 TWh.

Of course, we still have the problem that the 4 TWh that wind does produce is often not when needed, but is generated when the system does not need it. To understand this, we need to look at the actual power delivered in MW by wind turbines compared to the total system demand at any given time, not just the total energy produced in TWh over a year. The next 4 charts show 2-week periods in each season—winter, spring, summer, and fall—in the year 2011. 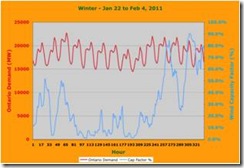 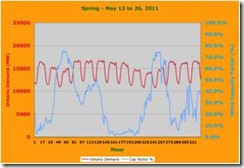 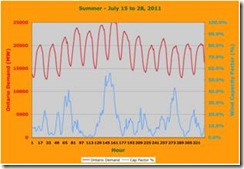 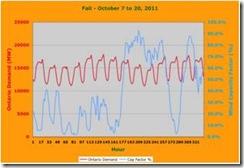 The four charts show how the Ontario demand rises and falls on a daily basis over a 2-week period on a 0 to 25,000 MW scale represented by a red line, and how the output of all Ontario wind turbines varies over the same period on a 0% to 100% capacity factor scale by a blue line.

The charts make several points about the output of wind turbines clear:

1. Output of wind turbines can vary significantly over a few hours, as each season shows examples of rapid rise and fall in wind output.

4. Each season has periods of days at a time when the average wind output stays low, showing that even if storage systems (very expensive) are integrated with wind, they would have to have tremendous capacity to level out the days at a time with very low wind output.

The four charts show clearly that from a power (MW) point of view, wind cannot replace coal, as wind output is often very low when the system demand is high, demanding coal to be run.

Impact of Wind on the Electrical System

This chart shows a typical example of how wind output impacts the electrical system. 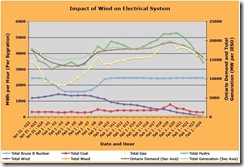 On night Jan. 31/morning Feb. 1, as the Ontario electrical system load (brown line) fell overnight, the wind turbine output (purple line) rose in the hours to an output of over 1300 MW between 0000 hours and 0700 hours the next day (peaking at 1441 MW at 0200 hours). The system operator responded by reducing Hydro output (green line), the Gas output (yellow line), the coal output (red line), and the output of the Bruce B nuclear units (blue line) by over 900 MW.

Again, looking at the overnight from Jan 31 to Feb 1, as wind output rose, even though the system operator was reducing generation sources other than wind, it is clear that the difference between the available generation and the Ontario demand exceeded 1400 MW, and the Sygration website data, which allows plotting of the Ontario IESO, shows the system operator was paying up to $71.50 a MWh to utilities outside Ontario to take the excess generation. At the extreme, consumers in Ontario were paying wind generators some $135 a MWh for  1441 MW, were paying Bruce Power $45 a MWh to not generate 900 MW, and were paying utilities outside Ontario $71.50 a MWh to absorb the excess generation.

One can only observe that it is remarkable that the Report of the Ontario Commission on the Reform of Ontario’s Public Services (the Drummond Report), issued in mid February 2012, identified as a cost-saving objective for the electricity consumer for the Integrated Power Supply Plan to be issued matching the Ontario Long Term Electrical Supply Plan. That would result in increasing the wind output from 1600 MW to over 8500 MW. This is the strangest way of saving money that I can imagine as it will only compound the problem of excess generation.

Even while wind was at peak operation, the coal generators served as backup (at low load) to be able to respond rapidly to the anticipated, and actual, drop in wind output that occurred just hours later.

Clearly, the chart shows that both from an economic point of view, and from the point of view of replacing coal, wind does not make sense.

Part 2, tomorrow, will address wind’s impact on nuclear plants when they are required to balance wind’s volatile output, as well as some general health considerations.

William Palmer, an Ontario Licensed Professional Engineer, has been responsible for Operations Performance Assurance at the Ontario Bruce B Nuclear Station and was authorized by the federal regulator as a Nuclear Shift Supervisor.

He is a member of the Canadian Acoustical Association, and the Acoustical Society of America. He has applied his professional experience in the energy industry, as well as education in engineering and risk assessment to a study of the safety of wind turbines.

Palmer has written a number of papers dealing with the subject of wind turbine noise and setbacks; has presented to international conferences, and has been a witness before tribunals, regulators, and legislators regarding wind turbines in Ontario. He has also written on the adverse economic impacts of integrating renewable energy supply into the bulk electrical system.