“What about the more than 50% of Nebraska’s severe weather that occurs at night and with no regard for holidays and weekends? Does anyone expect NextEra employees to make up for the loss in radar resolution from the company’s wind power facilities?”

Since 2009, two Nebraska communities have been destroyed by tornadoes, the most recent in June, 2014 (in Pilger). Articles covering these disasters can be found here and here.

Needless to say, accurate weather forecasting is essential for protecting life and property. But what happens when wind turbines are placed too close to a NEXRAD [1] weather radar? We may know soon enough.

NextERA’s Cottonwood wind project (113.6 MW) proposes to site all of its 52 turbines within 2½ to 7 miles of the Blue Hill, Nebraska NEXRAD facility. This will be the closest of any operating turbines in the U.S. to weather stations in Tornado Alley.

Privately, local weather service employees have expressed concern and, given Nebraska’s storm history, they’re right to be wary. An illustration of the project and radar station can be viewed here.

Forecasters watching for severe weather look for key indicators in the radar data including the strength of the signal reflecting off the storm cloud, the rate at which the cloud is growing (or if its decaying), and its direction/speed. This information is critical in determining the size and intensity of the storm and the geographic area likely to be impacted should a warning be issued.

Wind turbines within 30 nautical miles of weather radar (line of sight) can significantly compromise the radar data [2] and impair a forecaster’s ability to evaluate developing weather events. Tracking a storm’s rapidly changing behavior as it moves into the turbine obstructed radar beam (the “cone”) is complex and may not be possible. 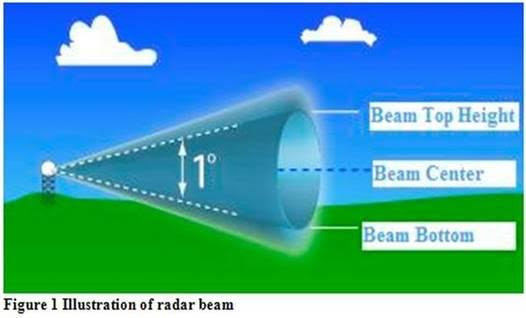 But not to worry. According to NOAA’s Administrator, Dr. Kathryn Sullivan, concerns about NextEra’s project are misplaced. In a letter to Nebraska Senator Deb Fischer, Dr. Sullivan touts an agreement signed between the Hastings, NE Weather Forecast Office (WFO) and NextEra [3] outlining mitigation steps for curtailing project operations during severe weather conditions. Shutting down the turbines will enable weather forecasters to view radar data that’s uncontaminated by the moving blades.

“[T]he mitigation strategy and forecaster training,” wrote Dr. Sullivan, “will reduce impacts and ensure that the Cottonwood project is not a threat to the integrity of NOAA’s forecast and warning operations.”

Convinced? Don’t be! For starters, the agreement is entirely voluntary and non-binding on the parties. But there’s more.

The NextEra-WFO agreement provides a sample scenario of the curtailment process as shown in the table below:

It would be nice if the growth and decay of severe weather were that well known, but it’s not.

For forecasters watching a developing thunderstorm, the total time interval during which the storm might cause damage is very short, but critical, and very difficult to forecast even with full radar access. Severe weather events can form, explode into massive life-threatening storms and fully dissipate all in under an hour, making the timeline depicted in the above table utterly laughable. In the real world, the storm threat may be over before the turbine shutdown is complete.

The area near the Cottonwood project, on average, experiences roughly 48 thunderstorm days per year (as many as 50-60+ storms) during the spring and summer months. Statewide over 11,000 hail events can be expected in the same period. [4] Are all of these events severe enough to trigger warnings? No. Can any one of these evolve into a severe storm? Yes!

A line of storms approaching at the right angle could fall within the obstructed area of the radar beam for many, many hours. Ideally, curtailment requests should be in effect for as long as the storm threat exists, but that’s not what the agreement says. The maximum duration of any shutdown is 1-hour with no more than 12-hours of curtailment enforced per year. NextEra is assured 15-30 minutes lead time for shutdowns during regular business hours. Longer time is needed on holidays, evenings, and weekends. After all, everyone knows weather slows down with the rest of us.

Why would any experienced meteorologist agree to force-fitting severe weather forecasts into NextEra’s tidy schedule? Maybe because NextEra promised to help out.

According to Dr. Sullivan, the project’s full-time wind farm operators will be trained as storm spotters.

What would they be trained to spot, a thunderstorm? By time they see the storm it’s too late. If they spot a tornado, it’s really too late. What about the more than 50% of Nebraska’s severe weather that occurs at night and with no regard for holidays and weekends? Does anyone expect NextEra employees to make up for the loss in radar resolution caused by the company’s wind power facilities?

Accepting these mitigation measures without fully understanding their effectiveness could place the lives and property of Nebraskans at risk. And what happens if/when the WFO finds its forecasting work is compromised by the project?

Paragraph 15 says they can have a sit-down with NextEra. Paragraph 16 prohibits the parties from publicly commenting on the performance of the other so if the mitigation fails, we’ll never know. Then there’s Paragraph 19 which says the agreement terminates after 5 years but either party can end it at any time.

This agreement is nothing more than window-dressing. If Dr. Sullivan read it, and that’s a big ‘if’, the people of Nebraska could not have been her first priority when she responded to Senator Fischer.

Hopefully, Senator Fischer and newly elected Senator Sasse are paying attention to what’s happening in their state. For those living outside of Nebraska, we should be keenly aware of how the wind industry has been allowed to degrade our public assets and place our fellow Americans at risk.

[2] Turbines impact radar data in at least two ways: (a) the spinning blades can block a significant percentage of the radar beam and decrease its signal strength down range of the wind facility; and (b) the turbines reflect energy back to the radar system which can produce false storm activity. NEXRAD filters that remove clutter from the radar signal only work for stationary objects (buildings, trees and terrain).

[3] In the agreement, NextEra is operating as Cottonwood Wind Farm, LLC.

[4] Data supplied by the Warning Coordination Meteorologist at the Storm Prediction Center in Norman, Oklahoma.

Author Lisa Linowes wishes to thank meteorologist Dr. Fred Ward of Boston who helped her better understand the difficulties of forecasting weather and the importance of radar.