The higher costs and inferior reliability of government-mandated wind power and solar power are well known to students of the electricity market. Many analyses on wind and solar have documented their real-world problems.

But another negative aspect of wind and solar technologies is their failure to live up to their raison d’être: emissions reduction. As I have explained in a four-part post, firming intermittent electric generation requires very inefficient fossil-fuel generation that creates incremental emissions compared to a situation where there is not wind or solar and fossil-fired generation can run more smoothly. This is a huge insight, a game changer, that could take the renewable energy debate in a new direction entirely.

A number of studies are emerging that quantify both the cost premium of politically-forced renewables and the minimal amounts of emissions reduction (and even notable emissions increase) resulting from their use. Country-specific studies (such as the one under review) present a methodology that is applicable to other jurisdictions (such as the U.S.) to better assess policy options and their consequences for all stakeholders, including taxpayers.

The conclusions that Lang draws include:

Lang’s analysis is very conservative. The author’s preference seems to be to gain an unassailable beachhead in a very contentious debate. But in reviewing his data, I see confirmation that new wind or solar capacity provide marginal reduction in CO2 emissions at best. I would even argue that there are emission increases because any reductions due to new renewables are dependent upon solar thermal technology development by 2020 providing sufficient thermal storage to allow operation for 8,000 hours per year.

Other conclusions that can be reached are:

In summary, Lang’s study and other considerations provide another illustration of the failure of industrial-scale new renewables, particularly wind and in the near future, solar, to meet societies’ goals. They do not provide the impact that is needed in terms of energy independence, avoidance of fossil fuel use and reductions in CO2 emissions that conventional wisdom, with all its inadequacies, dictates.

My summary of Lang’s paper follows.

The BAU option is illustrated in the following chart from Lang’s paper (all charts reproduced with permission). It shows the electricity production projected to 2050. The five options investigated replacing all the coal production by 2040 in accordance with realistic build rates, with the remaining BAU generation unchanged. The electricity production from the replacing generation must provide for that of the replaced coal plants.

In 2010, about 70% of electricity generation uses coal, followed by natural gas and hydro. The five options considered to replace the coal portion entirely are:

Solar thermal has some inherent storage capability due the thermal inertia of the heat transfer fluids, which will smooth out short term fluctuations. As well, it is assumed that technology development by 2020 will provide sufficient thermal storage to allow 8,000 hours per year operation, eliminating the need for shadowing/backup by other generation plants, as is required by wind.

The results show the combined effect of the BAU case, minus coal, plus that of the replacement technologies.

Figure 2 summarizes the outlook for CO2 emissions for all the options. Note that Option 3 (Nuclear & CCGT) provides over 80% savings, which is a target that many claim to be necessary in the context of combating climate change. 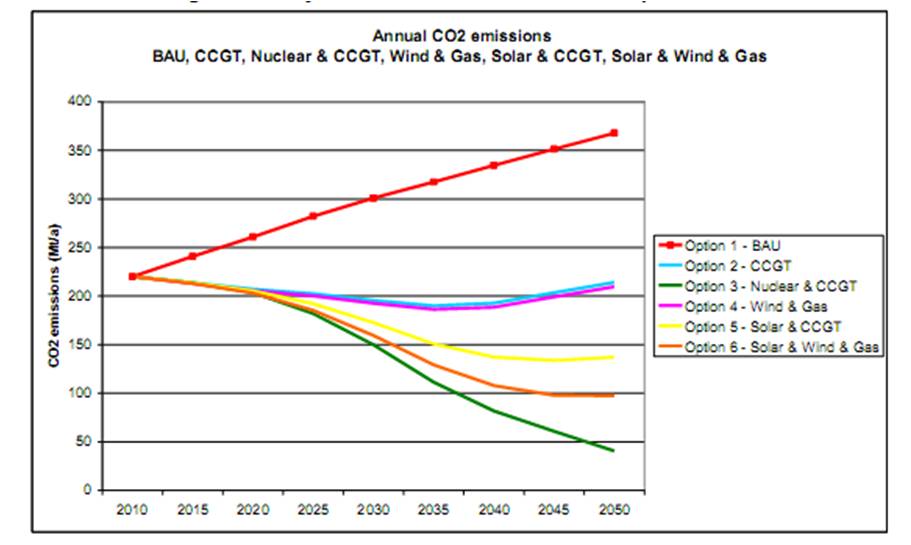 Lang’s options 5 and 6 merit some comment. First, Option 6 will be discussed, and to assist in this, it is necessary to look at the chart for this projection, which is shown in Figure 3. 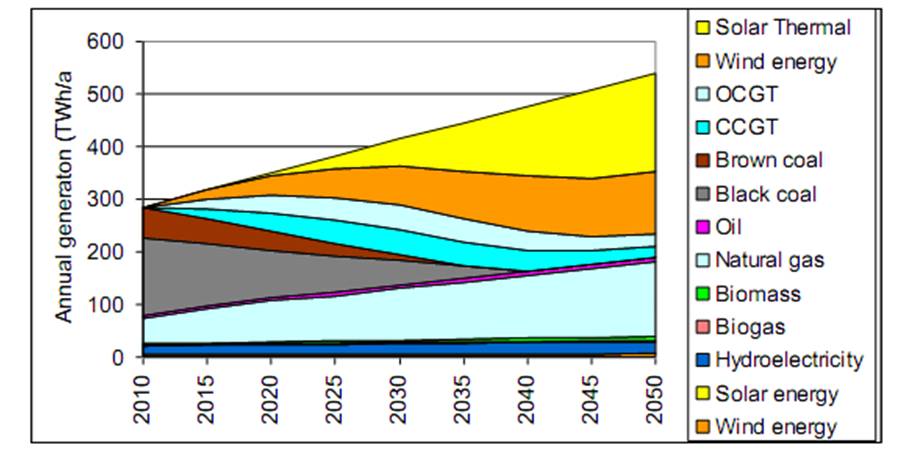 In Figure 3, focus on the top four segments, Solar Thermal, Wind energy, OCGT and CCGT. This represents the coal replacement complement for Option 6. The gas component below this is that already present in the BAU scenario (see Figure 1). The model was built assuming a given build rate for solar and wind, which results in a certain level of production. The difference required to meet the necessary total MWh was then added as additional gas production, including OCGT and CCGT. However, this replacement gas production is not sufficient to balance the amount of wind present. It should be about at least twice the wind production to avoid adversely affecting electricity system reliability. This change would increase the gas component and reduce some combination of that for Solar Thermal and Wind energy accordingly. These changes would likely increase Option 6 (Solar & Wind & Gas) to about the same level of CO2 emissions as Option 5 (Solar & CCGT).

With respect to Option 5, as mentioned above, it is assumed that technology development by 2020 will provide sufficient thermal storage to allow 8,000 hours per year operation, eliminating the need for shadowing/backup by other generation plants, as is required by wind. Inasmuch as this is generous, it will overstate the benefits attributable to both options 5 and 6. The resulting CO2 emissions could easily increase to the same level as options 2 and 4, that is, showing no decease relative to 2010.

A few model parameters are generous to new renewables. Less generous treatment could easily show increases over 2010 in CO2 emissions for all options that involve wind and solar.

Turning now to costs, Figure 4 shows the resulting impact on electricity costs per MWh, which speaks eloquently for itself. 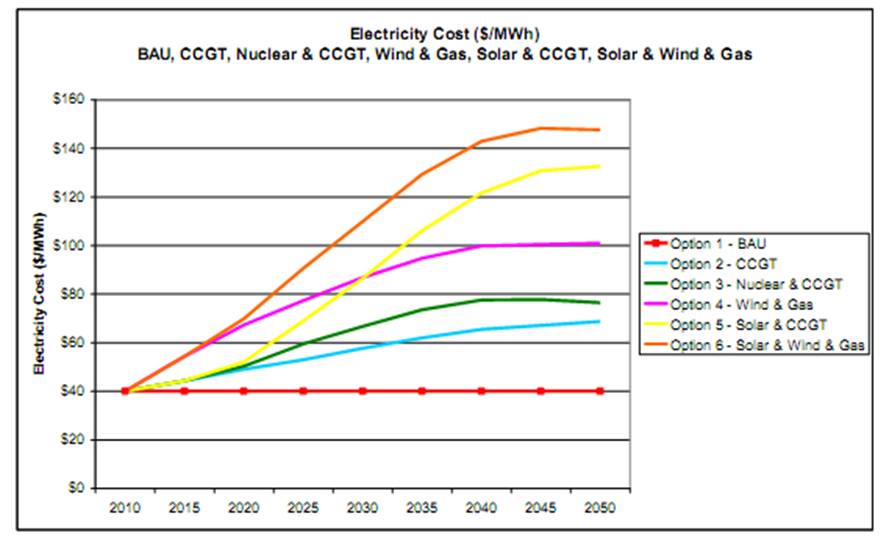 Suffice it to say that the three options involving new renewable energy technologies will result in electricity cost increases from 250% to over 300% of the 2010 levels.

Lang presents further proof that industrial-scale renewable capacity additions, particularly wind and in the near future, solar, are problematic in terms of meaningfully reducing emissions. They do not provide the impact that is needed in terms of energy independence, avoidance of fossil fuel use, and reductions in CO2 emissions that conventional wisdom, with all its inadequacies, dictates.

Acknowledging that we must make efficient use of all our resources and in the absence over the next few decades of significant advances in CCS technologies and breakthroughs in energy conservation/ efficiency, we must look to nuclear fission plants as a bridge to future electricity generation capabilities. In the meantime, the extensive resources needed for new renewable energy implementations would be better spent on energy conservation/efficiency measures and, perhaps of greater importance, research and development for future technologies including: CCS, nuclear waste management, nuclear fusion and solar.

As electricity is an essential resource for the well-being of people in all countries, approaches to providing it must be soundly based. To that end, Lang provides a much-needed and effective road map.