Profile Costs of Wind Energy: Why are Utilities Overpaying?

“Profile costs exist due to the fact that wind has bad timing; when the wind is blowing strongly the market isn’t demanding high amounts of electricity and vice-versa.”

With nearly a century of federal government oversight in electricity markets, one might expect the regulatory equivalent of a well-oiled machine, in this case the Federal Energy Regulatory Commission (FERC).

To its credit, FERC has generally given favorable treatment to market-based solutions opposed to top down control. [1] However, the push for green energy has changed how many markets behave for the worse. Far from a well-oiled regulatory machine, we have a Rube Goldberg device that produces curious outcomes. One great example is the way utilities gladly overpay for wind power.

In “Profile Costs as a Component of Integration Costs in Wind Energy”, published in Stanford University’s Comparative Advantage (Vol. 4 Issue 1), I examine this topic in depth. [2] My finding: wind introduces great inefficiency in our electricity markets due to integration costs. In particular, I focus on one very large component of integration cost called a profile cost, which measures the relative value of energy based on the time of day and how reliable it is to the electrical grid.

Think of profile cost in this way. It is late at night and people are sleeping and businesses closed. However, the weather outside is quite windy, and a lot of wind energy is being generated that isn’t wanted or needed. The value of wind energy at this point is less than other energy sources that can be turned on or off–and the difference between the rest of the grids electricity value and the wind electricity value is the profile cost. Unfortunately, the problems are only going to get worse if we keep adding subsidized wind power to the grid.

As the great late Milton Friedman stated, “At least since the 1920’s governmental policy has been making energy more expensive than it should have been. Relative to the real costs of producing energy, we have been overpaying for it.” [3]

It is this concept of overpaying for electricity—and the resulting economic inefficiency—that underpinned my research. However, instead of focusing on observable pricing as Friedman was referring to when he spoke in the 1970s, I focused on the fundamental costs of electricity, which sometimes represent only a portion of observable contract prices.

My hometown utility company, Xcel Energy, for example, writes, “The cost has declined, making wind energy competitive with natural gas generation, and with our advanced forecasting capabilities, wind is becoming a more predictable, dependable part of our system.” [4]

We see other backwards results like negative pricing. Electricity generators continue to provide power to such an extent they are not only giving it away for free at times, they are actually paying others to take it. Imagine if McDonalds made so many hamburgers they paid you to take them because they couldn’t sell any more of them. That doesn’t seem like a successful business practice, does it?

As a scientist, I have to question why—at first glance at least—the rules don’t apply here.

While it is true that electricity has challenges that other physical goods don’t possess, this hasn’t stopped market players from devising clever ways to trade, price and deliver the goods. In my home state of Minnesota, we have a very aggressive renewable energy mandate for wind, 25% by the year 2025. [4]

In 2008 a very large high production wind facility was built in Dexter, MN. This facility would provide all of the information I used for my own research. When electricity passes from the wind facility to a node to be sent to the rest of the grid, a locational marginal price (LMP) is generated for the energy based on real-time calculations of electricity demand, supply, and congestion made by the grid operator

The LMP helps the market participant make decisions based on bid and ask prices for what their behavior should be. Should they increase electricity generation or decrease it? But as I mentioned previously this isn’t what we see happening, particularly with wind power. The main reason this occurs is because market forces are being ignored in favor of power purchase agreements that lock in a specific purchase price for the wind energy being generated.

This is all well and good, but this company isn’t making any money! My research yielded results that in 2012 the losses to the Southern Minnesota Municipal Power Agency (SMMPA) from this facility were $14.6 million and $12.7 million in 2013. [2] 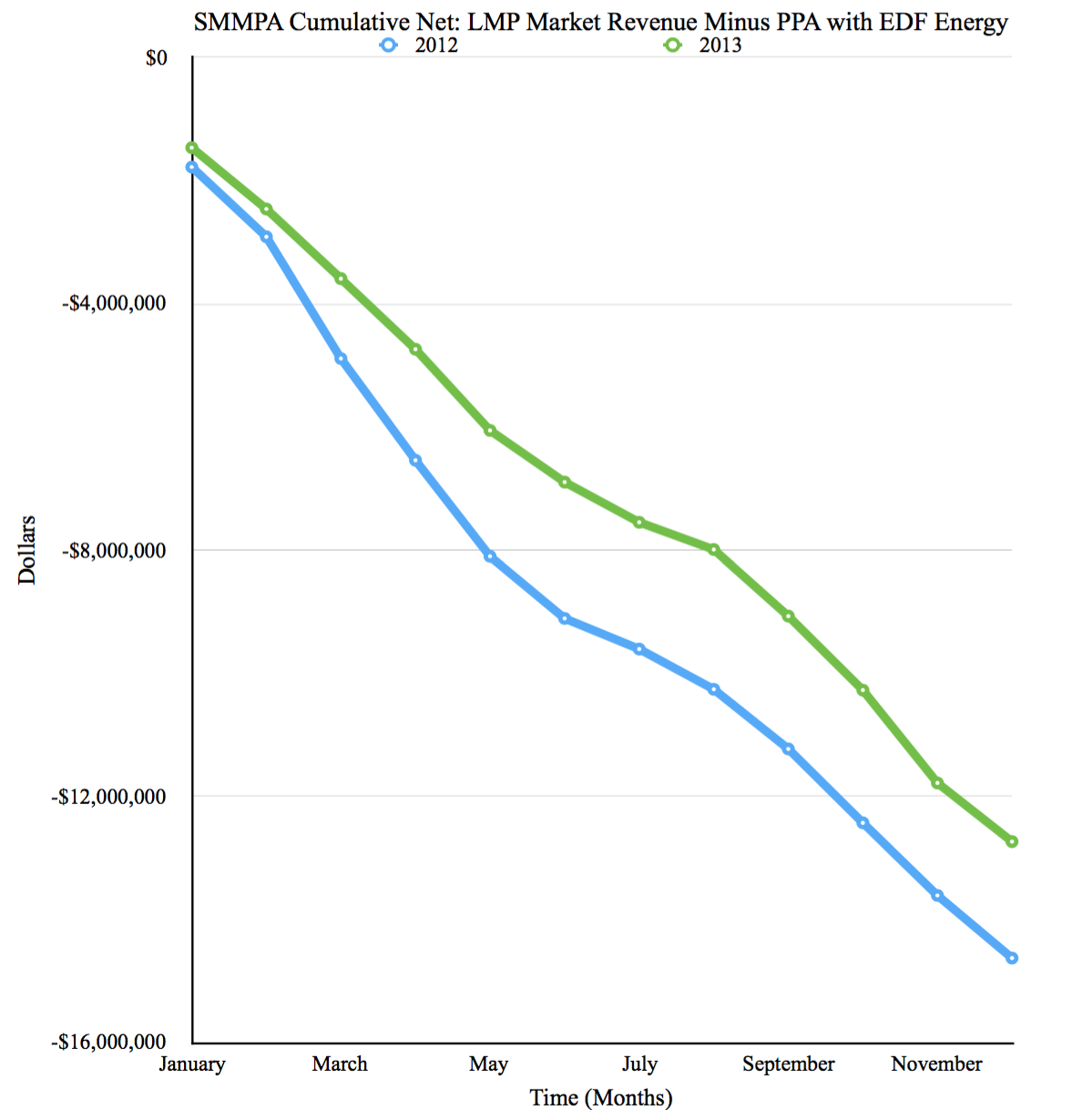 The reason for this loss is attributed to the fact that the wind energy is inherently valued less than the electricity mix currently in the grid due to its extra costs. This difference between the contract price and the market price is exactly the profile cost. Profile costs exist due to the fact that wind has bad timing; when the wind is blowing strongly the market isn’t demanding high amounts of electricity and vice-versa.

More robustly the costs are a consequence of the marginal values of electricity at different points in time and the opportunity cost of matching wind generated electricity to the rest of the grid through storage. But perhaps even more importantly these profile costs, which are very significant, aren’t currently included in cost comparisons between energy sources. 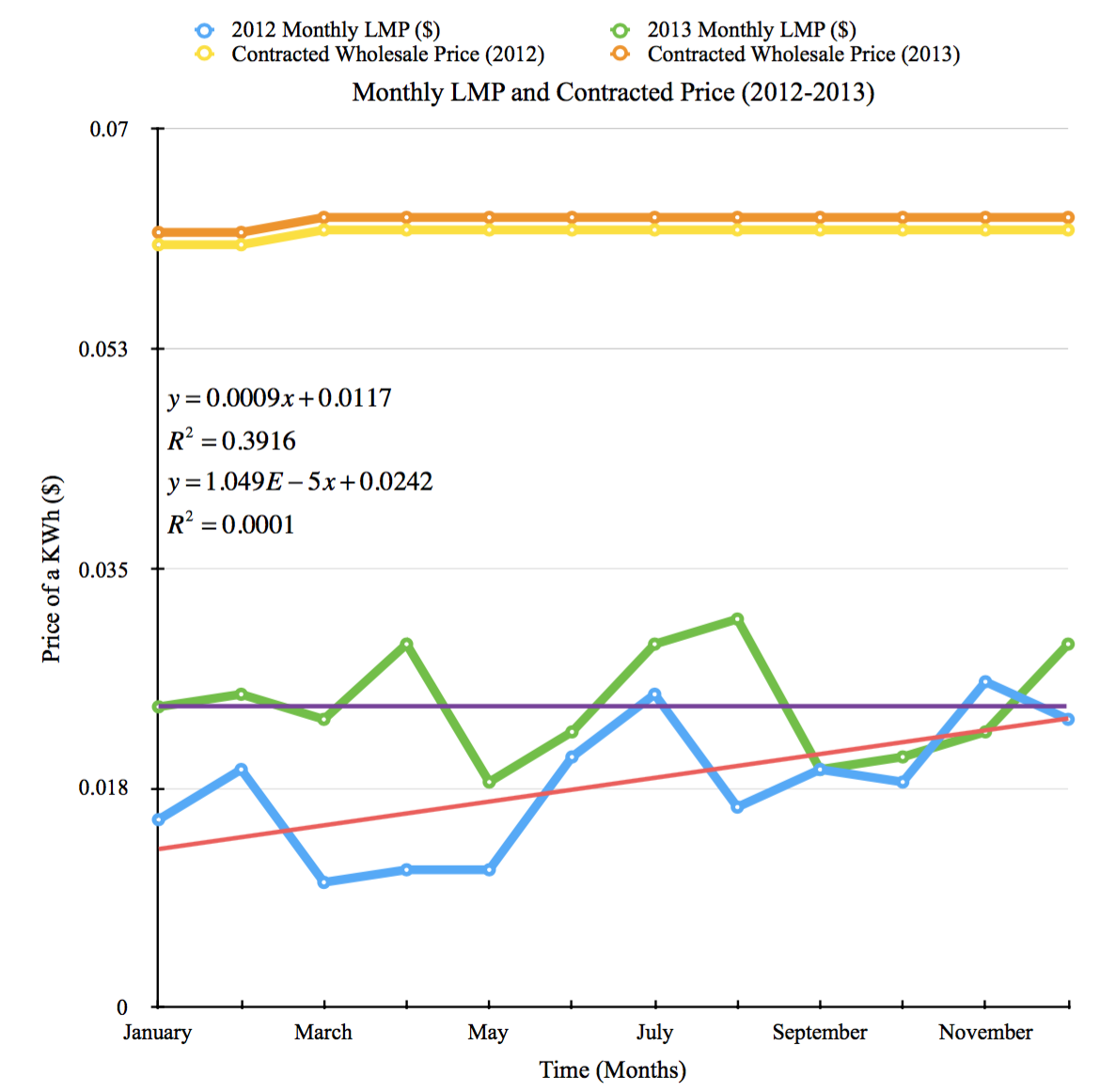 The result is that SMMPA takes a huge loss on the wholesale market with its wind contracts. This is alarming in and of itself—after all, it would seem that this isn’t a good activity for any company to engage in—but the trouble doesn’t stop there. A review of the integration cost literature shows that this effect of intrinsically lower-valued wind electricity is exacerbated by increasing the amount of wind on the grid. Suddenly that 25% MN wind energy mandate is starting to sound like a terrible idea.

There is more to this story. Milton Friedman wasn’t under some illusion that the government is the only bad player in bad economics, it takes two to tango. He wisely said, “I would not want for a moment to suggest the idea that we have a wicked government on one side and a pure snow-white oil industry on the other––very far from it. There is no industry in this country that speaks more loudly about the virtues of free enterprise and does more to undermine it than the oil industry.” [1]

While this specific comment is directed at oil companies, the essence of what Dr. Friedman was saying holds very true to this case as well. Utilities are profiting even while taking losses by sending the bill to taxpayers. This happens in the form of production tax credits and renewable energy credits to name a few.

In fact, the Government Accountability Office counted in 2013 that there are 82 federal wind programs benefitting wind power, spread across 9 agencies that spend a combined $2.9 billion a year on the subsidies. [6] The largest and most direct of these is the $23 per megawatt-hour production tax credit, which allows companies to profit from negative prices. SMMPA has even said they do not curtail their wind energy production unless the negative LMPs are larger (deeper in the red) than what it would cost to make their developers whole on lost production tax credits. [5]

When anyone does not pay the true price of his or her actions often times the outcome is bad for the general public. What we have learned is that wind energy is often oversold because significant costs that other energy sources don’t have to deal with are excluded from their cost comparisons. In this case, these costs are called profile costs and arise from the fact wind is outside of our control and often blows at times that is not in alignment with market demand. These costs are very large and amounted to tens of millions of dollars in losses for both of the years I examined for SMMPA.

Currently, energy companies are more than happy with this outcome because they receive billions in subsidies every year. My hope is that the voters and policymakers take a long hard look at all the costs—including profile costs—and decide whether or not this arrangement is truly worth the enormous cost to the taxpayer and its supposed benefit to society.

Tyler McNeal is a scientist and economist currently employed at a Fortune 500 firm specialising in portfolio construction and analysis. He has done economic research at the Center of the American Experiment, is a fellow of the Charles Koch Institute, and holds a B.S. in Neuroscience from the University of Minnesota, College of Biological Sciences. He thanks Travis Fisher of the Institute for Energy Research for helpful comments for this post.