Why Trump Should Not Fund an Oroville Dam Fix

“And yet, the federal government – not to mention the states – has invested shockingly little on such (flood repair) projects in recent years, spending about as much on flood recovery as prevention. Trump has vowed to spend $1 trillion on infrastructure, but it’s unclear if levees and dams will be included. Even in California, the center of “the resistance” (to Trump), we need help and cooperation from the federal government. It’s not about petty politics or about Trump’s twisted vision of loyalty, assuming he even honors it. It’s about saving lives.”

“California passed a $7.545 billion Proposition 1 Water Bond in 2015 that includes $395,000,000 for “flood management.” These funds are to be coordinated with $800 million allocated for flood control projects under Proposition 84 (2006) and $4.09 billion in general obligation bonds to repair flood control structures under Proposition 1E (2006). Of the Proposition 1 monies, $295 million would be dedicated to levee failure and flood projects mainly in the Sacramento Delta. This is to say nothing about the $597 million in Federal Stimulus funds appropriated to California for infrastructure projects in addition to $4.6 billion spent on Army Corps flood projects mainly in California under the Obama Administration from 2008 to 2016.” (Wayne Lusvardi)

“California’s $7.545 billion Water Bond (2015), “Proposition 1, has seven funding categories, with a pot of money allocated to each. The bond language preauthorized spending in the largest area—$2.7 billion (36%) for water storage projects. For the other six areas, spending must be appropriated in the state budget. With the passage of the most recent budget, nearly 80 percent of the bond has now been appropriated. The only category with no funds appropriated is flood management, which is still spending down money from earlier bonds.

– Public Policy Institute of California, “How is California Spending the Water Bond?” (June 2016).

As of the writing of this article, California has had to evacuate some some 180,000 people in the Dam Inundation Pathway of Oroville Dam in Northern California due to at one point in time the reported threat of an “imminent” dam failure.  Under a worse case scenario, however remote, there is the possible specter of their being displaced until summer. The spillways to the dam still are at risk of failure over the next few days and months, as new rainstorms are forecast for Northern California.

California Governor Jerry Brown has requested President Donald Trump declare California a major disaster area in the hope of defraying $162 million in projected disaster related expenses. Although the Federal Emergency Management Agency (FEMA) has a number of programs for disaster relief of households and government entities, federal funding for a fix of the eroded and damaged portions of spillways on the dam should not be considered.

But we need to first clarify what has happened at the dam before elaborating on why federal funding should not be considered.  Unfortunately, space and attention spans don’t permit such a discussion here. Therefore, for those who want to read an account of what has transpired at Oroville Dam thus far please see the addenda to this article below, otherwise read on.

First, the dam is a state-built, -owned, and -managed facility, unlike the Federal Central Valley Project that supplies about two-thirds of the reservoir water in the state.  Only the hydropower plant at the Oroville Dam requires a federal license to operate from the Federal Energy Regulatory Commission (FERC), which otherwise has no jurisdiction over the rest of the dam facility.

Of the Proposition 1 monies, $295 million would be dedicated to levee failure and flood projects mainly in the Sacramento Delta. This is to say nothing about the $597 million in Federal Stimulus funds appropriated to California for infrastructure projects in addition to $4.6 billion for Army Corps flood projects mainly in California under the Obama Administration.  As the quote at the top of this article indicates, since 2015 every category of funding authorized by the 2015 Water Bond has been committed except flood protection and repair projects.

Contrary to media calls for increased Federal funding to bail out California from its infrastructure problems, there is plenty of unexpended state flood protection funding available, and there is no need to commit any Trump Infrastructure Program funding to California for an Oroville Dam spillway fix.

Moreover, California Democrats have converted the New Melones Reservoir, principally a flood control facility, into California’s first “All Green Dam,” where there is no water to release for flood control or farming anymore, only for fish, except in very wet years—about once every five years.

In 2005, a group of environmental organizations curiously appealed to FERC (that only licenses the Oroville hydropower plant) to harden the barren earthen downslope of the Oroville Emergency Spillway and the dirt embankments of the Main Spillway with concrete lining.

However, this would clearly not have withstood the force and weight of the water released from the dam spillways observed on worldwide TV broadcasts, which wiped out an asphalt road (as seen by photos of the recent downslope damage here). Both state and regional water agencies thought the slope-hardening proposal unnecessary and ineffective and refused to fund it.

Overfull Dams and a Heartless Republicans?

Despite all the past squandering of state and federal funding for California water and flood bonds and grants, Gov. Jerry Brown’s focus has instead been to get more Federal funding for a high-speed rail project for a legacy of his administration. Prior attempts by Brown to leave a legacy geothermal energy project in his name during his prior administrations in the 1970s resulted in failure that was covered up by the Metropolitan Water District of Southern California bailing him out of a financial jam.

Gov. Brown has said: “we’re doing everything we can” to respond to the dam emergency, while not mentioning the wasted and uncommitted funds on flood projects thus far brought to the public’s attention by this writer as far back as 2010 (see here and here).

CNBC and the San Jose Mercury News have posted editorials calling for state and federal action on Oroville.  And the Sacramento Bee newspaper is pointing the finger at Trump’s “heartlessness” and the past actions of the Metropolitan Water District of Southern California (MWD), for rejecting the slope-hardening proposal in 2012.

But the MWD is not chartered to do flood projects and, the appeal to FERC was grossly misplaced.  Oddly, as far back as June 14, 2003, the LA Times reported (“Davis Cools Water Dispute Rhetoric”) that then Democratic Gov. Gray Davis refused to grant MWD rights to store $10 million of farm water it had purchased for droughts in Lake Oroville.  So much for the “heartlessness” of Republicans and Trump.

Wayne Lusvardi formerly was formerly employed by The Metropolitan Water District of Southern California (MWD) and conducted a mass valuation of probable property damage loss due to potential dam failure for Lloyd’s of London insurance underwriters and MWD.  The views expressed are his own.

To clarify: What the world has been watching for the last few of days is that a hole (in the one-third-of-a-mile-long main concrete-lined perpendicular spillway chute) developed and started to erode the earthen embankment underneath it cutting backward into the dam’s earthen fill (not the concrete dam core).

The sides of the main spillway are comprised of a 45-degree, sloped earthen embankment without concrete lining.  Water releases through the main spillway were thus curtailed, which resulted in the 30-foot high by one-tenth-of-a-mile long parallel emergency spillway wall overtopping with water, including overflowing the adjacent parking lot (see visual of spillways here).

Additionally, releases of water through the penstock of the hydropower plant that goes under the dam to spin turbines was blocked due to unspecified damage, possibly from vibration or spinning when there is no demand for the power (see visual here).

Reportedly, the main spillway is again discharging water at maximum capacity after an overnight dumping of rock riprap into the hole in the spillway during the dark hours of the night on Sunday and early morning hours on Monday. There is no hole in the buried impervious core of the dam – see visual here).

Earlier than forecasted heavy rainfall has filled the dam so rapidly that spilling excess water to draw down the water level has been required but two of the three spillways were either unusable or unable to work at designed efficiencies.  As the graph below shows the forecasted water level for Oroville was supposed to peak in June 2017, but instead has exceeded the 3.5 million acre-feet of water capacity of the reservoir by mid February.

Otherwise the water level wouldn’t start being drawn down until summer.  Now Oroville has about 3.5 months of an excess water situation where the only solution is to rapidly dump it before more surges of rain runoff again catch dam operators with short time windows to respond to defective spillways.

The Oroville Dam Inundation Zone map shown below indicates the wide extent of flooding from unplanned releases of water and/or any dam failure potentially engulfing Oroville and Yuba City as well as impacting Butte, Yuba, Glenn and Sutter counties. 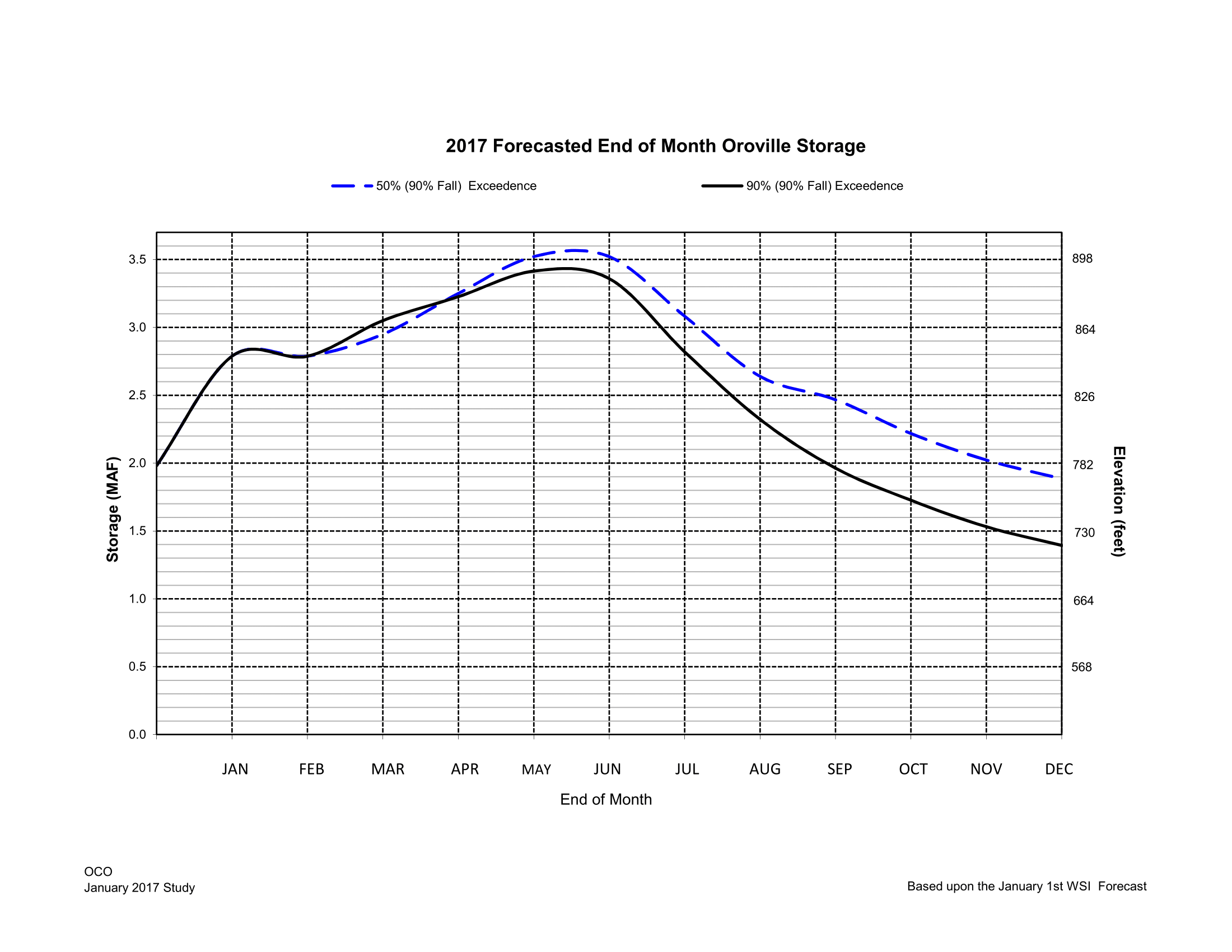 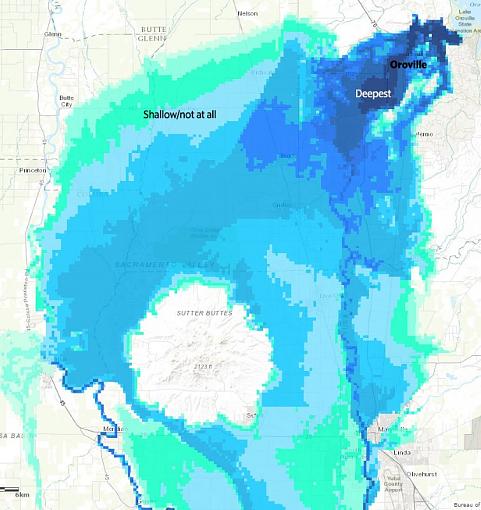 The Oroville Dam Failure Flood Inundation Progression Map showing the timing of flooding from 1-hour to 9-hours is of Biblical-like proportions – see here.  In Hour 1 the City of Oroville would be inundated, Hour 2 Yuba City and Marysville and by Hour 9 State Highway 70 and the Golden State Highway.

Estimated property damages by the US Army Corps of Engineers would likely mount into the billions under a worst-case scenario. The plausible damages from 3.5 months of spilling excess water from the dam even without dam failure is not yet estimable.