Global Warming—Not All It Is Made Out to Be

In last Friday’s Wall Street Journal (Jan. 2, 2008), Science Journal editor Robert Lee Hotz reviewed the climate of 2008 and concluded that despite a relatively cool year, all signs were go for anthropogenic global warming proceeding at a rapid and destructive clip—perhaps even faster than climate models envisioned.

Hotz’s review was extremely selective, with the effect of keeping the specter of catastrophic global warming alive and well, in the face of mounting evidence that it has, in fact, become gravely ill.

A closer look at the recent behavior of global temperatures indicates that all is not well with climate-model projections of alarming climate change.

2008 added another year to a lengthening string in which the rate of global temperature rise has been far beneath model predictions showing that natural variability still plays a large role in everyday weather and climate. Man-made global warming has taken a back seat, at least temporarily, in driving climate.

The global average temperature in 2008 was ~0.2°F lower than it was in 2007 (the exact amount depends on whom you ask). Two-tenths of a degree may not sound like much, but consider that the best computer models constructed to mimic how our climate operates predict that as a result of our greenhouse gas emissions, the global average temperature ought to be rising at a rate of about 0.2°F every 5 years or so. A drop of two-tenths of a degree is a major step in the wrong direction.

Obviously, one year is too short a time to assess any climate trend or model. Natural variations in the earth’s weather/climate system are large enough to insure that global average temperatures do not smoothly step from one year to the next—even during “global warming.” So we must look over the longer term to get a better idea of what is going on. 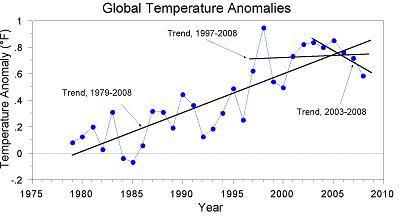 Much of this recent temperature behavior can be attributed to the timing of natural cycles and variations in the earth’s climate that are related to large-scale ocean and atmospheric circulation patterns in the Atlantic and Pacific oceans—phenomena such as the Atlantic Multidecadal Oscillation, the Pacific Decadal Oscillation, and the cycles of El Niño/La Niña cycles—and possibly to a small influence from solar variations. These natural influences can be tracked back in the climate record for hundreds of years and, as such, provide strong evidence that they are true components of the earth’s climate and not simply manifestations of recent anthropogenic global climate change.

Compare the observed temperature behavior (Figure 1) to the projections of future global surface temperatures made by climate models incorporating increases in the human emissions of greenhouse gases (Figure 2). Notice that the temperature projections made by climate models tend to rise steadily or in some cases accelerate a small amount with time during the first half of the 21st century—a condition opposite to recent observations. 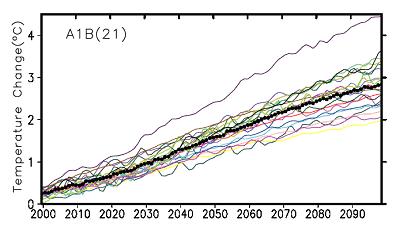 Figure 2. Projections of global annual average surface temperature anomalies for the 21st century made by a collection of climate models run with a mid-range (SRES A1B) future emissions scenario. Each of the thin colored lines is a projection from a particular climate model, the thick black dotted line is the mean of all the models (source: IPCC, 2007).

What this all means is that climate models that are run with increasing concentrations of greenhouse gases are not replicating well the observed behavior of the earth’s temperature in recent years.

There are several possible reasons for this recent failure of the climate models. The first is that our scientific understanding of the workings of the earth’s climate system is incomplete. Important issues such as how clouds respond to changes in the earth’s temperature and human emissions are simply not well understood at this time. The second is that many processes are too complex to be thoroughly described in the models and/or operate at scales that are too small to be handled in climate models run on today’s best computers. In other words, existing computer power is not great enough to include all of the necessary details and therefore may be getting some things wrong. And third—in a sort of quasi-combination of the first two—a unique coincidence of “weather” events has occurred which has acted to offset much of the warming pressure from increasing greenhouse gas concentrations. However, models tell us that the likelihood of such an occurrence is growing exceedingly low as the string of years with a lack of global warming continues.

The net result of these combined problem areas is less-than-perfect models of our past and present climate (as evidenced by recent global temperature behavior) and unreliable projections of our climate to come. Instead of catastrophic climate changes involving rapid temperature increases, an accelerating sea-level rise, and a growing ferocity of hurricanes, we observe a slowing rate of global warming (as seen in Figure 1), a modest sea-level rise (e.g., Holgate, 2007), and hurricane behavior less related to global warming than to natural climate variations (e.g., Knutson et al., 2008). Other observed changes, such as increases in weather-related damages and destruction, are improperly attributed to changes in climate because they are thoroughly explained by increases in population and wealth (e.g., Pielke Jr., et al., 2008)—in other words, there are more material things getting in the way of naturally occurring storm systems.

When the data are fully examined, the specter of catastrophic climate change from our combustion of fossil fuels is not all that it is made out to be.

While coming years may or may not continue the cooling trend of the past several, they will almost assuredly continue to add to the growing evidence that our coming climate will likely be far less detrimental than the popular projections of it to which we are often exposed.