Tesla Stumbles: Bad EV Economics or Something Else?

After spending three months as the world’s most valuable auto manufacturer, Tesla Inc.’s (TSLA-Nasdaq) share price has fallen due to perceived problems with its business model. Tesla reported its second quarter shipments at the end of June, results that were not as robust as many investors had hoped (being at the low end of management’s guidance).

As the quarter ended, Tesla CEO Elon Musk tweeted details about the timing of production and delivery for the new Model 3 units, the company’s electric vehicle (EV) targeting the mass market. Many investors were pleased with Tesla’s progress in meeting its target production, but others faulted the battery production problems cited for lower vehicle deliveries.

How you classify Tesla shapes the issues investors consider most important in valuing the company.  An auto manufacturer’s value rises and falls on output targets – either met or not. Technology company valuations are more sensitive to the business opportunities being exploited by a company and conceptually how these are likely to create new demand.

Given Tesla’s multiple business lines – leading edge EVs, auto financing, solar roof tiles, battery storage projects, and tunnel boring – more investors lump the company in with technology companies, meaning investors focus on the “dream” rather than the results. As the technology sector is currently undergoing a market correction, many investors are chalking up Tesla’s recent stock price decline to market rotation rather than the company’s car output issues. But, in the background is the issue of Tesla facing increased competition in its auto business, meaning it may no longer be the stock market darling it has been.

A recent analysis by The Wall Street Journal shows the impact of EV subsidies on demand. In February, the Hong Kong government announced the ending of tax subsidies for EVs effective April 1. While Tesla doesn’t break out its sales by country, car registration data is available from government sources.

For 2017’s first quarter, Tesla registered 3,700 vehicles in Hong Kong, including 2,939 cars in March, alone. That volume compares to the 1,506 Teslas registered for the entire second half of 2016. According to the WSJ, the ending of the tax subsidy raised the effective price of a Tesla Model S four-door car to around $130,000 from its subsidized price of less than $75,000, and making it nearly twice as expensive as a Mercedes Benz.

Ouch!  No wonder not a single Tesla was registered during April. The suspension of EV tax subsidies lasts through March 2018, but the government has said it will review the policy before then.

Tesla, which produced 25,000 Model S and Model X vehicles in the first quarter, only shipped 22,000 in the second. Questions abound now as to whether the company met its 1Q2017 production target by pulling forward nearly 3,000 vehicle sales in Hong Kong as a result of the impending end to EV tax subsidies. The sales pulled forward may have contributed to Tesla missing its second quarter output target.

Of course, if Tesla is a tech company and not an auto manufacturer, these production/sales misses shouldn’t be a major issue, as the EV business retains a cult following.

As a manufacturer of a niche automobile attempting to grow into a mainstream competitor, it is important to note that Tesla’s U.S. tax subsidies apply for the first 200,000 vehicles produced, which will likely be exceeded sometime in 2018. That raises the question as to what happens to Tesla’s Model 3 backlog when price-sensitive EV buyers, who have ordered the car, realize it may be delivered without the tax subsidy. We won’t know the possible impact on Tesla’s future sales until the tax subsidy ending is announced.

However, the history of every secession of EV tax subsidies has seen an immediate and sharp fall in sales, such as in Hong Kong. This episode highlights how widespread EV tax subsidies are partly, even largely, responsible for the surge in global EV sales.

Global EV sales have more than tripled since 2013, and if last year’s 42% growth rate continues, it means eight out of 10 cars sold in 2030 would have a plug. That growth pattern is described as an S- curve, which begins with very sharp growth for a while before eventually flattening and then possibly declining. As inconceivable as that scenario may seem, it is not impossible to imagine. The probability of the S-curve dominating the EV industry growth, however, remains quite speculative, particularly if EV subsidies wane.

In 2016, there were an estimated 773,600 EVs sold worldwide out of 90 million total light-duty vehicle sales, which grew 2%. While the global EV picture shows only a 0.86% market share for new car sales last year, in certain markets it was substantially greater.

The monthly EV sales gains in 2016 appear to support the S-curve growth model, despite the doubts of energy forecasters such as OPEC, BP plc (BP-NYSE) and Exxon Mobil Corp. (XOM-NYSE).

ExxonMobil sees EVs growing slowly to about 10% of U.S. auto sales, but it sees something very different for hybrid vehicles – those possessing both an electric motor and an internal combustion engine. According to ExxonMobil’s latest forecast, The Outlook for Energy- A View to 2040, the company writes that “Sales of new hybrids are expected to jump from about 2 percent of new-car sales in 2014 to more than 40 percent by 2040, when one in four cars in the world will be a hybrid. Average fuel economy will rise from 25 to about 45 miles per gallon.”

BP frames its forecast slightly differently, but arrives at a similar conclusion regarding oil’s use – it will not be impacted significantly. Its Energy Outlook 2035 forecasts that over the next two decades, EVs will grow from around 1.2 million vehicles today to around 70 million in 2035, about a 58-fold increase. Meanwhile, the world’s global car fleet will double, meaning another 900 million ICE cars added to the current estimate of 900 million cars on the world’s roads today.

Promoters of EVs would argue that the BP estimate, and those of other energy companies, are way too conservative. A new study issued by Bloomberg New Energy Finance (NEF) suggests that EVs will become price competitive with ICE vehicles even without government subsidies between 2025 and 2030. At that point, NEF sees a “real shift” occurring that will create an explosion in EV sales.

NEF sees it happening as a result of a continuation of the decline in the cost of EV batteries.  Since 2010, lithium-ion battery pack prices have declined by two-thirds to around $300 per kilowatt-hour (kWh). GM has said that the cost of the battery for its new Chevy Bolt EV was down to about $145/kWh.  NEF projects that battery costs will fall to $73/kWh by 2030, without any significant technological breakthroughs. The cost reduction is driven by larger battery manufacturing plants and optimizing the battery pack design.

Interestingly, the NYT article presented an extensive number of challenges for the NEF forecast. For example, it quoted other auto experts suggesting that falling battery costs are not the only factor that will determine whether EVs gain a significant share of the global fleet. Major hurdles include the limited range of EVs and their long charging times. As EVs begin using larger batteries and are able to go further on a single charge, the range issue will disappear, however, changing the psychology surrounding EVs may take much longer. A reader suggested that EV owners should invest their waiting time meeting very interesting people as their cars charge. Maybe this can become a new social event – elitist as it may seem.

Many people charge their EVs at home overnight, but that is not an option for city dwellers who must park their vehicles on city streets. As a result, NEF suggests EVs may have a difficult time making inroads in dense urban areas, which may slow EV growth after 2040. That is an interesting conclusion since EVs are offered as a key component of the mobility revolution futurists see impacting the automobile industry.  If overcoming the EV charging issues cannot be achieved, the mobility revolution will need to be driven primarily by commercial fleets that can arrange for facilities for mass charging of vehicles.

The NYT made two points in concluding its article, one of which echoed BP’s forecast. The NYT pointed out that even with a greater number of EVs, the world would still have more traditional vehicles, just as BP pointed out.  The second point was that EVs and improved batteries will have little impact on heavy-duty trucking and aviation, meaning that petroleum consumption in these sectors will likely grow.

The International Energy Agency in a recent study, The Future of Trucks – Implications for Energy and the Environment showed the significance of the heavy-duty truck sector on global fuel use. According to the report, “Much of the growth in road freight energy demand to 2050 in the Reference Scenario is satisfied by oil products.

Figure 3.  Freight Growth in All Areas Except Europe 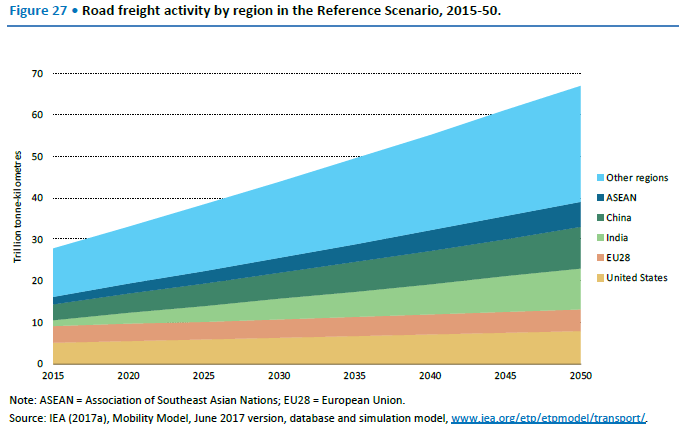 With trucking demand growing, transportation fuel use will grow, although gasoline use by cars may suffer from the growth of EVs. This may force refineries to need to be revamped to increase truck fuel output. Examining Exhibit 8 (next page) from the IEA report, all geographic regions show growth, with the possible exception of the European Union countries. That is not surprising given the countries’ population density, lack of population growth, aging populations, and increased push to eliminate CO2 emissions. These forces are likely to force the distribution business to adjust its business model, potentially stifling oil use in Europe.

The NEF study, which is similar to several others that assume a highly aggressive acceptance of EVs, projects that EVs will make up 54% of new light-duty sales globally by 2040. By the time that happens, according to NEF, the global petroleum market will have surrendered about eight million barrels a day of gasoline demand, which is a considerably greater impact than EVs have in BP’s forecast, which sees a three million barrels a day impact by 2035.