“By the end of February, the 2015/16 El Nino subsurface temperature had not turned negative; however, the lowered March temperature suggests this has taken place. The direction of this Super El Nino is similar to the one of 1997/98 and there is great chance of considerable global cooling by the end of the year.”

The University of Alabama at Huntsville (UAH) posted its latest satellite global temperature data that spans until the end of March 2016 shown by Figure 1. 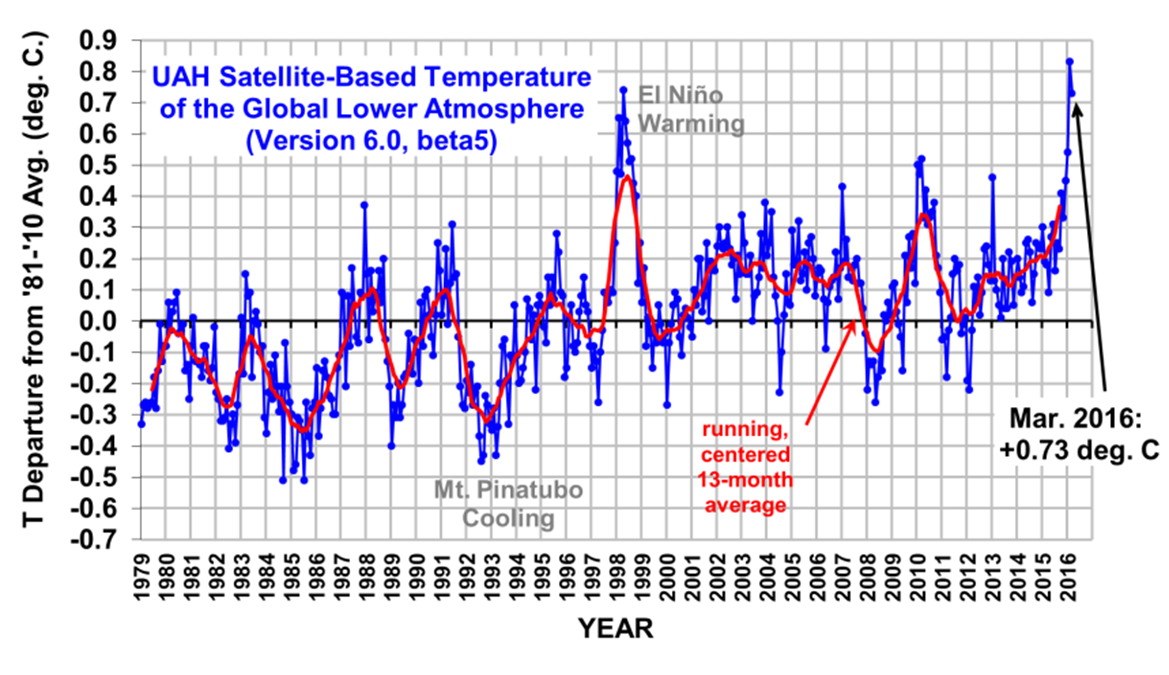 The March 2016 temperature has fallen to 0.73 degrees C which is even lower than the previous record of 0.74 degrees from April 1998.  The satellite temperature data shows a temperature rise since 1979 of 0.12 degree C. per decade; or 1.2 degrees per century which places the earth’s warming below the recommended limit on global warming from the 2015 Paris Climate Accord.

Data over thousands of years show approximate 500-year cycles of planet warming and cooling.  We are currently in the Current Warming Period which commenced approximately 1850.  This was preceded by the Little Ice Age from approximately 1350 to 1850.  Thus continued global warming should be anticipated until after the start of the 22nd. century.

Along the Equator stretching from New Guinea to Western South America is a region in which prevailing winds and sea surface temperatures create weather systems that impact the planet.  When temperatures are warmer this creates a system called El Nino and countering cooling system is called La Nina.  La Nina normally follows an El Nino.  El Nino means the boy or Christ Child and this name was given because peak El Nino usually occurs around Christmas.  These systems have been observed for centuries and are not caused by carbon dioxide from burning fossil fuels.

An El Nino system formed in early 2015 and became a Super El Nino that caused the February 2016 global temperature that was the highest observed by satellites over their period of measurements from 1979 to present.  A La Nina is expected to follow this event and the question is when this happens and how much cooling takes place.

An excellent explanation of the importance of El Nino on global temperatures is given by the March 18, 2016 Reuters article  “How much clarity do we have on transition to La Nina?” by Karen Braun.  The article shows graphs of monthly surface and subsurface temperatures measured along the Equator. 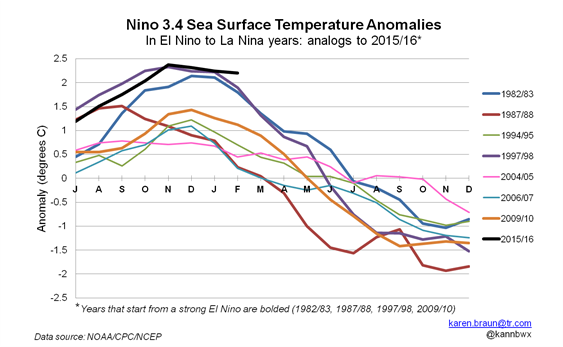 As seen for the 1997/98 El Nino, rapid cooling took place after the peak temperature early 1998.  This resulted in a super La Nina later that year.  The 2015/16 data does not show rapid cooling by the end of February 2016.  However, due to the 0.11 degree C. drop in global temperature in March 2016 shown in Fig. 1, one can infer substantial decreases in sea surface temperature are taking place. 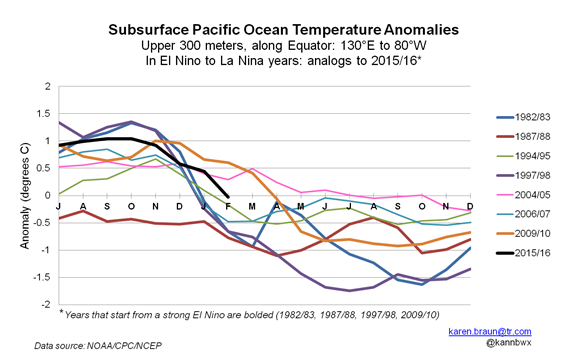 By the end of February, the 2015/16 El Nino subsurface temperature had not turned negative; however, the lowered March temperature in Fig. 1 suggests this has taken place.  The direction of this Super El Nino is similar to the one of 1997/98 and there is great chance of considerable global cooling by the end of the year.

No Global Warming for 58 Years

Another perspective about the 2016 global temperature is the March 7, 2016 article “NOAA Radiosonde Data Shows No Warming For 58 Years” by Tony Heller.  In NOAA’s press briefing 2015 was the “hottest year ever” was a statement NOAA had a 58-year radiosonde (balloon) temperature record but only showed the last 37 years in a graph.  Figure 4 shows the graph released by NOAA.

Tony Heller found the missing years of radiosonde data from 1958-1976 in the scientific journal article “Global Temperature Variation, Surface-100mb:  An Update into 1977” in the June 1978 Monthly Weather Review.  This data is shown in Figure 5 which indicates global temperatures declined from 1958 until 1977.

The NOAA, and NASA, press release claimed 2015 was the year with the hottest global surface temperatures since measurements were made from 1880.  The physics behind the behavior of the greenhouse gas carbon dioxide causing warming has the warming occurring in the atmosphere from the earth’s surface to the stratosphere.

With a considerable amount of fanfare, NOAA and NASA announced 2015 and possibly 2016 are the warmest years since recording keeping started in 1880. Their media supporters like Seth Borenstein and Justin Gillis produced scary articles circulated through the media announcing this threat to the world from carbon dioxide from burning fossil fuels causing catastrophic global warming. The United States should lead the way for all nations to immediately find alternative energy sources to replace fossil fuels regardless the economic cost.

The importance of the NOAA and NASA assertions is questioned by the experimental data cited in this article.  It is quite likely the present Super El Nino will change to a La Nina that will bring global temperatures back to levels seen a few years ago.

Will reporters like Seth Borenstein and Justin Gillis report to the public the errors of their recent assertions?  I think not.