In the waning hours of the tax bill debate last December, the Obama Administration and GOP leaders released the terms for continuing the Bush-era tax cuts. The framework negotiated between the parties initially omitted any reference to extending the renewable energy programs introduced in 2009 under the American Recovery and Reinvestment Act of 2009 (ARRA), which were scheduled to sunset at the end of 2010.

The renewable industry responded ferociously. A media blitz hit overnight, and wind and solar lobbyists huddled with lawmakers on Capitol Hill. Repeated warnings about job loss and the immediate harm to green energy businesses worked. Lawmakers relented and sanctioned a 1-year extension. The windfall? A check from the U.S. Treasury for 30 percent of a project’s qualifying cost.

With the fuss now behind us, we decided to examine one of the more popular renewable subsidy programs to be extended, the Section 1603 cash grants. Our analysis revealed a pattern of rewarding inflated project costs and decreased energy production, while shifting a substantial portion of the development risks to American taxpayers.

Following the collapse of Lehman Brothers in September 2008, tax-based policy incentives lost much of their effectiveness as the number of tax equity investors declined. Provisions under ARRA were designed to fill the void by reducing, and essentially eliminating, the need for tax advantaged investors. The Section 1603 cash grant program enabled developers to secure direct monetary outlays from the Federal government to cover 30 percent of a project’s qualifying cost. (Greenwire October 14). The criteria for receiving the grant were not onerous, and the Treasury Department was prohibited by law from ranking the projects before distributing the funds.

Spanish energy giant Iberdrola Renewables, Inc., which received nearly a billion in cash grants alone, argued the money was crucial to promote jobs and economic opportunity (as if the money spent elsewhere would not have done the same….).

But a preliminary evaluation of the grant outlays published last year found that 61% of the grant money distributed through to March 2010 “likely would have deployed under the PTC [production tax credit] if the grant did not exist.” In many cases, money went to projects that were already under construction, and in some cases already producing electricity.

In an interview with Greenwire, an executive for a foreign subsidiary whose projects received Section 1603 money complained that it was unfair to criticize them for taking the funds because those projects otherwise would have received the production tax credit. He insisted, “The cost to the U.S. government is not materially different.”

The executive is not alone in his thinking. Others in the renewables industry have made the same claim which helps explain why support existed for extending the grant program for 1-year.

Cash in hand is worth more than discounted subsidies paid out over the course of ten years[1]. And the obvious intrinsic value of cash versus a tax credit in today’s financial circumstances cannot be ignored. But we were prompted to look further into the numbers themselves to test the claim of equivalence. Our analysis revealed that the cash grant program offers significant monetary assistance over the production tax credit while reducing benefit back to the public.

Table A below shows our findings. 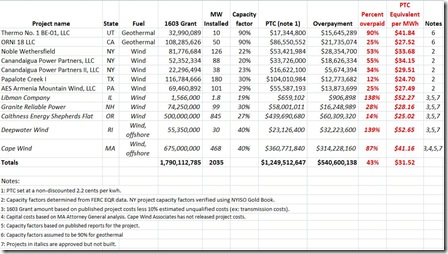 Of the twelve projects, the total cash grants that were (or will be) distributed exceeded anticipated production tax credit amounts by over one-half billion. In particular, those projects with greater development costs and/or lower net capacity factors received substantially higher benefits from the cash grant than the current PTC.

To keep the table simple, we did not apply a 7.5% discount rate to the production tax credit. If we had, the monetary differences of the two programs would have been more stark since the cash grant is received at the start of the operational life of a renewable energy project.

Around the time ARRA was passed, researchers at Lawrence Berkeley National Laboratory provided an academic comparison between the production tax credit and the ITC/cash grant from the perspective of a project developer/owner. The authors claim that the programs are — at least in theory — equivalent but offer a quantitative financial analysis to determine which program might provide the better financial option based on project characteristics. The study looked at total installed project costs ($/kilowatt) and net capacity factor and calculated the difference between the two subsidies.

Tables 2 and 5 from the report show the net value of the ITC/cash grant for wind and geothermal respectively. For wind, the report concluded that “under most capacity factor assumptions, projects that cost $1,500/kW or less are likely to receive more value from the PTC, while projects that cost more than $2,500/kW are likely to be better off with the ITC [cash grants].” For geothermal the report found “the PTC provides more value in nearly all cost and capacity factor combinations examined.”

While we do not doubt the arithmetic used, the range of project costs considered do not reflect the market and leave the reader with a sense that the PTC is an equal or better benefit than the cash grant. For example, wind project costs were assumed to range between $1500/kW and $2500/kW, yet most onshore wind projects built since 2009 are at least $2200/kW and many cost more than $2500/kW. Offshore projects are double at $5000/kW. The authors placed geothermal project costs at under $6000/kW, but typical project costs now start at $6000/kW. Net capacity factors for wind ranged from 25% to 45%, representing generation levels much higher than actual and forecasted for the projects we reviewed, including offshore wind.

There are other qualitative benefits under the cash program which shift the rewards to wind and geothermal developers while laying project debt and risks at the feet of American taxpayers. For example, the production tax credit is dependent on project performance; the cash grant is not. This has the effect of eliminating performance risks for the developer. If a project’s net capacity factor is marginal the public still grants the cash and projects that would normally not meet financial thresholds requirements are apt to get built anyway. The Section 1603 program substitutes government payments for private investments after which the government just walks away.

Upfront cash grants have only served to grow the industry’s dependency on federal subsidies and in return, developers have minimal incentive to negotiate lower prices with suppliers and no financial obligation to meet claimed capacity factors. The speed at which the industry became reliant on this new stimulus should not surprise anyone.

However, there are cheaper, much more effective opportunities for achieving clean energy goals. Instead, we have succeeded in adopting a policy that drives up construction and energy costs while at the same time eliminating any incentive to build projects that can meet the highest performance standards. In fact, the more expensive a project is to construct the better for vendors, contractors and developers.

It doesn’t stop there. For intermittent resources, higher construction and operational costs also push up energy prices since there are fewer hours of operation to spread the inflated costs over. Power purchase agreements for onshore wind are at least two times higher than traditional sources of generation. Offshore wind agreements are prices at four times that of fossil fuels.

If Congressional leaders are serious about cutting government waste in the discretionary budget, green energy subsidies deserve another look, beginning with the Section 1603 program. The incentives in place today go in the wrong direction by rewarding higher construction costs, higher energy pricing, and marginal to poor performance.

About the authors: Mr. Short is an independent consultant with a practice that specializes in renewable energy in the New England states. Among his clients are wind, solar, hydroelectric and biomass generators. Ms. Linowes is Executive Director of the Industrial Wind Action Group, an organization focused on the policies and costs of deploying large-scale renewable generation. The viewpoints of Mr. Short and Ms. Linowes are solely theirs and are not necessarily the viewpoints of their clients.

[1] The federal production tax credit (PTC) was authorized by the Energy Policy Act of 1992 and amended over time. The subsidy provides a 10-year, inflation-adjusted production tax credit for power generated by certain types of renewable energy projects, including wind, biomass, geothermal, and other renewable fuels excluding solar. The inflation-adjusted credit is currently at $21/MWh. To qualify for the PTC, the power must be sold to an unrelated party.

The cash grant program under ARRA creates a new subsidy, administered by the Treasury. The program provides grants covering up to 30% of the cost basis of qualified renewable energy projects that are placed in service in 2009-11, or that commence construction during 2009-11 and are placed in service prior to 2013 for wind, 2017 for solar, and 2014 for other qualified technologies. The Treasury is required to make payments within 60 days after an application is received or the project is placed in service, whichever is later. http://eetd.lbl.gov/ea/emp/reports/lbnl-1642e.pdf