[Ed. note: David Bergeron is president of SunDanzer Development, Inc., a solar energy company located in Tucson. His earlier posts at MasterResource are Free-Market Solar: The Real Opportunity and Economic/Environmental Assessment of Grid-Tiered Photovoltaics: Arizona Lessons for the U.S.]

“The economic case for grid-tied PV is indeed quite hopeless, and the sooner we stop the misguided subsidies the sooner we can focus on actually addressing our legitimate energy and environmental concerns.”

The U.S. Energy Information Administration (EIA) recently published an excellent report on the projected cost of electricity generated by different technologies: coal, natural gas, nuclear, and various others, including renewables.

Their Levelized Cost of Energy (LCOE) calculation combines upfront cost with recurring cost to estimate the average cost of power produced by these technologies. Here is the EIA cost datafor coal, natural gas, and solar PV. 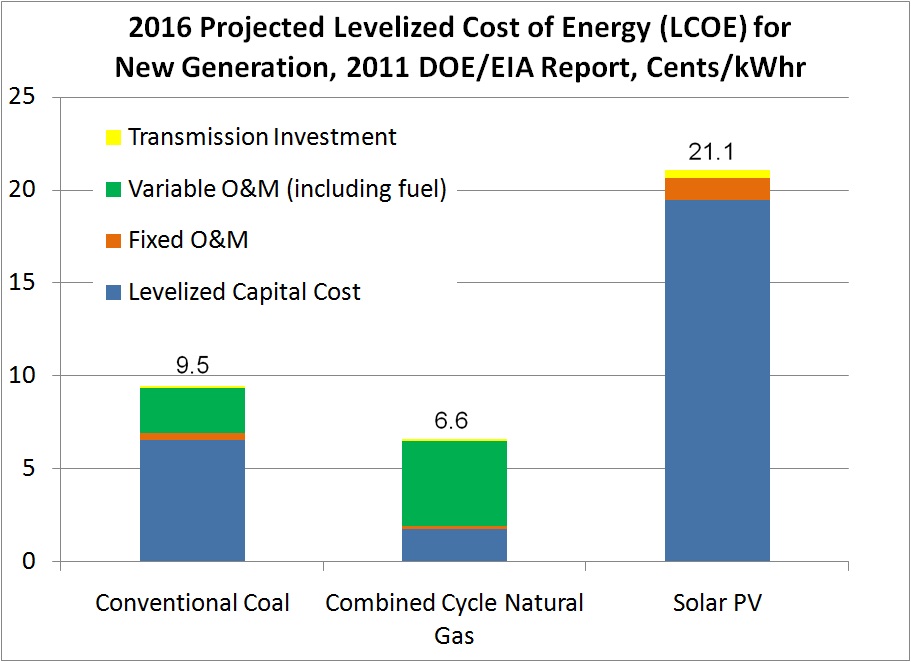 At first glance, it looks like PV could be competitive with coal or natural gas plants if the PV cost were to drop below 10 cents/kWh. But there is an important difference between PV and the traditional technologies which makes this simple cost comparison invalid.

Solar has no fuel cost element but significant capital investment.

But here is the rub. If you plan to power a city with PV, it is not sufficient to simply build a large PV array, because PV only produces power during the day. At night and during cloudy weather, a back-up power source is needed since there is no practical way to store the PV energy.

So the city must also build a conventional coal or gas plant, which will sit idle on many sunny days. The real cost of the PV is not just its cost, but also the cost of the back-up plant. Coal and natural gas plants do not need back-up like PV does.

So what is the real value of PV?It is principally the fuel savings which occur when the traditional plant can reduce output during sunny days. Or stated another way, PV is worth avoided fuel cost. The main point is that PV is not competing against the LCOE of coal or natural gas plants; it is competing against the variable operating cost of these plants, which is 2-4.5 cents.

Here in Tucson, we use coal and the fuel avoidance value is less than 3 cents. For PV to actually be cost effective today, it would need to have an LCOE of about 3 cents. Since it is currently about 21 cents, it has a long way to go before it makes sense for the citizens of this city, despite industry propaganda and political pandering.

But to further demonstrate how nonsensical this technology is, even if PV manufacturers drove the cost to $0/watt for PV panels, the cost of the aluminum mounting structure, copper wiring, labor, inverters, and maintenance result in a LCOE around 10 cents.

So even with free PV panels, the total system is still three times too expensive to be viable on-grid . The economic case for grid-tied PV is indeed quite hopeless, and the sooner we stop the misguided subsidies the sooner we can focus on actually addressing our legitimate energy and environmental concerns.

Installing grid-tied PV is not just a waste of time and money, but a waste of copper, aluminum, labor, land, and capital. We are neither ahead nor green. This wasteful activity is unsustainable, mining the materials used in these unnecessary systems is damaging the environment, and the entire endeavor is a burden on the economy. There is hardly a clearer case of special interest run amok, besides perhaps ethanol subsidies.

PV is fantastic for people that live where there is no access to the electric grid, but it is wishful thinking to believe it can replace conventional generation methods or even be cost effective for on-grid application.

Other renewables– geothermal and biomass– will likely become viable before PV because they do not require back-up power. But today, conservation is by far the best way to economically reduce pollution and CO2 emissions.