The New York Times ran an article highlighting the findings, but the article was so criticized that the newspaper’s editors responded with what amounted to an apology.

NC WARN’s startling, untenable conclusion is the subject of this post, which is based on a longer paper. 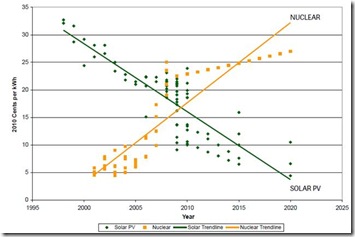 Figure 1. Generation costs from solar and nuclear power according to Blackburn and Cunningham (2010).

But nuclear power is less, not more, expensive than solar power. It is also reliable, or in industry terms, dispatchable, which adds value that is not reflected in simple cost comparisons.

NC WARN estimates the cost of nuclear power by increasing the estimates from one single piece of literature (Cooper 2009). (We will discuss this later.) With regard to the costs of solar power, they employ the following formula:

They define the amortization factor – i.e. “the annual payment due on each borrowed dollar of investment” – as the following ratio:

A further step corrects the Generating Capacity “by a derating factor (15%) to reflect the line-loss that occurs when a central inverter converts direct current (DC) to alternating current (AC) for use”.

So, what is unfair?

The first flaw regards the Capacity Factor, which “indicates the percentage of hours in a year that a solar installation generates electricity output”. Blackburn and Cunningham assume a Factor of 18%, which they define “a reasonable industry standard for North Carolina”. That means that solar panels are supposed to work, on average, 1,577 hours per year. As we will show later, this represent a gross overestimate of the observed capacity factors both in the US and in North Carolina.

But let’s ignore this point and accept, for a moment, the 18% capacity factor. Let’s put the numbers into the formula. Would you expect to find the value from the graph, 15.9 cents / kWh? Try yourself! Assume, as Blackburn and Cunningham do, “3 kW residential solar installation, $6/W installed cost, 6% borrowing rate, 25-year amortization period, 18% capacity factor, 15% derating factor”. Here’s the math:

How is that possible? After all, 35.0 cents is not just well above the 15.9 cents under which solar power is more convenient than nuclear power: it is also well above the highest projections for the cost of nuclear power. In the next paragraph we will expose the trick.

The most glaring problem with NC WARN’s report is its use of subsidies in calculating the costs of electricity. NC WARN decided to arbitrarily include subsidies for solar power to calculate its costs and at the same time not take into account subsidies for nuclear power. Moreover, the report fails to admit that solar subsidies in NC are much larger than nuclear subsidies.

Regarding solar power, by NC WARN’s own calculations, solar power costs 35 cents per kWh without first taking into account subsidies. They then apply two state and federal subsidies to significantly lower that cost. Between the 30 percent federal tax credit and the 35 percent state tax credit for solar power, the cost per kWh is reduced to 15.9 cents per kWh, which makes it less than their estimates of nuclear power (which will be discussed below).

If we took this logic to the extreme, then a 100 percent tax credit would make the generation of solar power completely free. They ignore the fact that there are still costs for generating solar power or nuclear power regardless of subsidies—subsidies do not make costs disappear.

It is true that electricity customers may pay less as a result of the subsidies, but that is only in their capacity as electricity customers. They will pay for those costs through the taxes that are necessary to give subsidies to solar power providers. This may have relevant distributional consequences: for example, since the well-off have, usually, larger houses than the poor, and so larger roofs per capita, the installation of rooftop solar panels (explicitly promoted by NC WARN) is likely to result in a wealth transfer from the poor to the rich.

By itself, the use of subsidies in their methodology undermines NC WARN’s entire report. Even applying their subsidy approach though, NC WARN does not indicate how subsidies reduce the costs of nuclear power in the same manner as solar power. In the report, they discuss subsidies to nuclear power, but never explain how those subsidies are translated into a lower cost for nuclear power. Therefore, their report unfairly gives solar power the “benefit” of subsidies but nuclear power does not receive the same benefit – indeed it is explicitly blamed for getting some subsidies.

When coming up with very unusual results, as NC WARN has done when comparing solar power to nuclear power, any report needs to explain why the methodology used is superior to other credible sources. NC WARN failed to do this.

According to the United States Energy Information Administration (EIA), new solar power is more than three times the cost of nuclear power (as seen in Figure X). The EIA estimates solar power to be 39.6 cents per kWh, which actually is in the ballpark of NC WARN’s own estimate (35 cents per kWh)) before their misapplication of subsidies. EIA estimates nuclear power to be 11.9 cents per kWh while NC WARN apparently estimates it at anywhere from 16-22 cents, depending on what section of the report one is reading. It is the misapplication of subsidies with solar power that flips everything on its head.

Solar photovoltaics are not cost competitive at present, with several studies finding them two to five times as expensive as nuclear reactors.

NC WARN however assumes a capacity factor of 18 percent for solar power when calculating its costs. There is no explanation as to why they use this higher number. This may not seem like a big deal, however, when applying Progress Energy’s conservative 16 percent number to the cost calculations, solar power costs (without taking into account subsidies) increases from NC WARN’s 35 cents per kWh to 39.4 cents per kWh. Coincidentally, this is basically the same cost for solar power that the EIA calculated (39.6 cents per kWh).

Table I shows data on installed capacity, generated energy, and capacity factor for the US in the last 5 years.

Utilities Do Not Care About Money?

To NC WARN, solar power is less expensive than nuclear power, but utilities want to hang-on to nuclear power and avoid solar power even at their own expense. According to NC WARN, “The state’s largest utilities are holding on tenaciously to plans dominated by massive investments in new, risky, and ever-more costly nuclear plants, while they limit or reject offers of more solar electricity.” They later argue “Duke Energy has turned down a host of competitively priced proposals.”

Solar power will only succeed when it will be able to meet some specific need that the market will be willing to reward. NC WARN themselves seem to realize this when they claim that “the trend cost decline in solar technology has been so great that solar electricity is fully expected to be cost-competitive without subsidies within the decade.” If that is true, why should the public pay extra-costs to install solar photovoltaic panels with an average life expectancy of 25 years, if we already know that solar power will be cheaper a few years from now? This question is neither answered, nor considered in their study.

Solar and Nuclear Power are Interchangeable?

NC WARN gives the impression that there is a choice between solar power and nuclear power. This is a fallacy. Regardless of whether solar power is used, there will be a need for conventional sources of electricity such as nuclear power.

Solar power, like wind power, are intermittent and unpredictable sources of energy. Since the sun does not always shine, electricity often is not being generated (for example, by night or in cloudy days). Even when the sun does in fact generate electricity, this does not mean there will be a need for it when produced.

Due to the unreliability of solar power, it is not a source for baseload generation of electricity (the electricity needed to meet regular demand) and since the sun does not shine on demand, it does not provide a source to meet peak demand for electricity (even though it is true that peak load is likely to occur when sun is most likely to shine, i.e. around noon). As a result, it has far less value than conventional sources of electricity. Even if the costs were equal for nuclear and solar, the value of nuclear would be far greater than solar power.

For example, a car and a bicycle are both modes of transportation. If they both cost $20,000 each, this does not mean their value is the same (at least to most people). A bicycle is unable to take the family to the movies or allow the driver to take long trips in a short period of time. The public will purchase a car for $20,000, but would laugh at the idea of purchasing a bicycle for $20,000 because the value of a car is far greater than a bicycle—this is the same difference between nuclear power and solar power.

The public and policymakers need accurate and reliable information about the costs of energy. They are not served by extreme and unsupported claims made by anti-nuclear power advocacy groups.

Nuclear power does have some questions regarding costs—that is a fair point to make. However, this point does not diminish the critical importance of nuclear energy and it certainly does not change the fact that it is far less expensive and more reliable than solar power.

COOPER, M. (2009). “The Economics of Nuclear Reactors: Renaissance or Relapse?”, Institute for Energy and the Environment, Vermont Law School, available at www.vermontlaw.edu.

From the New York Times posted in response to the article:

An article published July 27 in an Energy Special Report analyzed the costs of nuclear energy production. It quoted a study that found that electricity from solar photovoltaic systems could now be produced less expensively than electricity from new nuclear power plants.

In raising several questions about this issue and the economics of nuclear power, the article failed to point out, as it should have, that the study was prepared for an environmental advocacy group, which, according to its Web site, is committed to ‘‘tackling the accelerating crisis posed by climate change — along with the various risks of nuclear power.’’ The article also failed to take account of other studies that have come to contrasting conclusions, or to include in the mix of authorities quoted any who elaborated on differing analyses of the economics of energy production.

Although the article did quote extensively from the Web site of the Nuclear Energy Institute, an industry group, representatives of the institute were not given an opportunity to respond to the claims of the study. This further contributed to an imbalance in the presentation of this issue.