$5.4 Billion in Solar: California Goes All In

“The government support — which includes loan guarantees, cash grants and contracts that require electric customers to pay higher rates — largely eliminated the risk to the private investors and almost guaranteed them large profits for years to come. The beneficiaries include financial firms like Goldman Sachs and Morgan Stanley, conglomerates like General Electric, utilities like Exelon and NRG — even Google.”

Because of their size and cost, it is worthwhile to take a look at these three facilities in greater detail:

Analysis of Economics and Performance

A simplistic but reasonable financial analysis can be conducted using the following assumptions:

· The average wholesaleprice of electricity in southern Californiain 2013 is about $36 per MWh.

· Price of electricity will rise at a rate of 2.5% per year.

· O&M costs for the systems will be about 0.5% of the original capital cost per year.

Please refer to this link to the CA Solar Projects Analysis; and note that, in an effort to simplify, the analysis ignores significant issues such as:

· The cost to operate and maintain a traditional fueled back-up system of equal or greater capacity, which is necessary to meet demand at night and when the sun is not shining adequately.

· The extra cost of integrating a diffuse and inconsistent supply onto the grid.

· The cost of service on any debt incurred for the capital investment or O&M costs.

· The cost of taxes, lease payments, depreciation, and other costs not noted.

The bottom line demonstrates, even with all these other costs ignored, that only 40% of the original $5.36 billion combined capital investment can be returned over 30 years by sale of electricity at market rates. 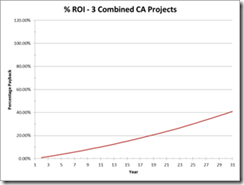 The answer to this question is that the money to prop up these non-viable ventures is coming from the taxpayers and from the consumers of electricity. The taxpayers are on the hook for low interest guaranteed loans, and are footing the bill for production tax credits and/or stimulus grants. The owners and operators of the solar facilities are also the recipients of special Power Purchase Agreements (PPAs) that guarantee the sale of their electricity at greater than market rates; the costs of which are, of course, absorbed by the consumers.

“As NRG’s chief executive, David W. Crane, put it to Wall Street analysts early this year, the government’s largess was a once-in-a-generation opportunity, and ‘we intend to do as much of this business as we can get our hands on.’ NRG, along with partners, ultimately secured $5.2 billion in federal loan guarantees plus hundreds of millions in other subsidies for four large solar projects”

I have often heard the argument that life is not all about economics, and not everything can be reduced to a cost analysis; but I contend that in a very basic sense this is not true, and that life IS all about cost and risk vs. benefit analysis. Money just happens to be the predominant way in which we measure cost and risk in modern society.

With regard to energy strategy the same principle applies; everything is a cost vs. benefit analysis. It may be popular to think that “it does not matter what it costs” (I hear this frequently), but this is simply not true. Society has limited resources, and it does matter. If your community invests in solar panels they are making a cost vs. benefit judgment.

If they do this instead of buying a fire truck, and you are the fire victim awaiting assistance, you might have a different perspective on the wisdom of the judgment. If our government promotes and subsidizes solar (or wind) energy generation we are making a cost vs. benefit judgment. If we drive up the cost and reduce the availability of electricity so that people suffer, we may have made an un-wise judgment.

The overwhelming benefits gained by humanity for the past century from advances in food production, health and longevity, industrial production of necessities (and luxuries), transportation, scientific knowledge, communication, etc. have been driven in no small part by abundant, reliable, and relatively low cost electricity.

In a recent post at MasterResource, David Howden discusses the concept of subjective externalities, and writes the following with respect to CO2 emissions in particular:

Maybe instead of being a negative externality there is actually a positive aspect to these emissions, and as per standard microeconomic theory those who benefit should pay those who create the positive externality. Everyone on the planet eats food, so perhaps a tax should be imposed on every global citizen to remunerate the creators of carbon dioxide

I doubt this suggestion will find much support; I don’t even believe in it! But the reason that I don’t believe in it has nothing to do with my feelings over the goodness or badness of the externalities in question. Instead it stems from a recognition that we just don’t know what the relevant externalities are.

There is a balance that needs to be struck. Positive change in energy policy requires scientific evaluation of fact as well as logical cost/benefit analysis of performance and economics.

Jerry Graf is an energy expert who blogs at Energy Strategy.