Editor’s note: This is Part II of a five part series that provides an essential basis for the understanding of energy transitions and use. The opening post on definitions was yesterday.

Baseline calculations for modern electricity generation reflect the most important mode of the U.S. electricity generation, coal combustion in modern large coal-fired stations, which produced nearly 45% of the total in 2009. As there is no such thing as a standard coal-fired station I will calculate two very realistic but substantially different densities resulting from disparities in coal quality, fuel delivery and power plant operation. The highest power density would be associated with a large (in this example I will assume installed generating capacity of 1 GWe) mine-mouth power plant (supplied by high-capacity conveyors or short-haul trucking directly from the mine and not requiring any coal-storage yard), burning sub-bituminous coal (energy density of 20 GJ/t, ash content less than 5%, sulfur content below 0.5%), sited in a proximity of a major river (able to use once-through cooling and hence without any large cooling towers) that would operate with a high capacity factor (80%) and with a high conversion efficiency (38%).

This station would generate annually about 7 TWh (or about 25 PJ) of electricity. With 38% conversion efficiency this generation will require about 66 PJ of coal.

Assuming that the plant’s sub-bituminous coal (energy density of 20 GJ/t, specific density of 1.4 t /m3) is produced by a large surface mine from a seam whose average thickness is 15 m and whose recovery rate is 95%, then under every square meter of the mine’s surface there are 20 t of recoverable coal containing 400 GJ of energy. In order to supply all the energy needed by a plant with 1 GWe of installed capacity, annual coal extraction would have to remove the fuel from an area of just over 16.6 ha (166,165 m2), and this would mean that coal extraction required for the plant’s electricity generation proceeds with power density of about 4.8 kW/m2:

An even larger area would be needed by a plant located far away from a mine (supplied by a unit train or by barge), and from a major river (hence requiring cooling towers), burning lower-quality sub-bituminous coal (18 GJ/t) extracted from a thinner (10 m) seam and containing relatively high shares of ash (over 10%) and sulfur (about 2%) and having a low capacity factor (70%) and conversion efficiency (33%). Coal extraction needed to supply this plant would proceed with power density of only about 2.5 kW/m2:

With this base range in mind, we can now proceed to examine power densities of natural gas-fired generation using large gas turbines and then four major modes of renewable electricity generation.

Photosynthesis is an inherently inefficient way of converting electromagnetic energy carried by visible wavelengths of solar radiation into chemical energy of new plant mass: global average of this conversion is only about 0.3% and even the most productive natural ecosystems cannot manage efficiencies in excess of 2%. The best conversion rates for trees grown for energy can be achieved in intensively cultivated monocultural plantations. Depending on the latitude and climate, these can be composed of different species and varieties of willows, pines, poplars, eucalyptus or leucaenas. Burning sawmill residues or wood chips in fairly large boilers in order to generate steam and/or electricity is a well-established and a fairly efficient practice — after all, energy density of dry wood (18-21 GJ/t) is much like that of sub-bituminous coal.

But if we were to supply a significant share of a nation’s electricity by using tree phytomass we would have to establish extensive tree plantations that would require fertilization, control of weeds and pests and, if needed, supplementary irrigation –- and even then we could not expect harvests surpassing 20 t/ha, with rates in less favorable locations as low 5-6 t/ha and with the most common yields around 10 t/ha. Harvesting all above-ground phytomass and feeding it into chippers would allow for 95% recovery of the total field production but even if the fuel’s average energy density were 19 GJ/t the plantation would yield no more than 190 GJ/ha, resulting in harvest power density of 0.6 W/m2:

10 t/ha x 19 GJ = 190 GJ/ha
190 GJ/31.5 Ms = 6,032 W
6,032 W/10,000 m2 = 0.6 W/m2
A wood-fired power plant with installed capacity of 1 GW, capacity factor of 70% and conversion efficiency of 35% would require an annual harvest of about 330,000 ha of plantation growth, an equivalent of a square nearly 58 x 58 km:
1 GW X 0.7 = 700 MW
700 MW/0.35 = 2 GW
2 GW/0.6 W/m2 = 3.33 Gm2 (333,333 ha)
?3.33 Gm2 = 57,735 m
Total area needed by a wood-fired electricity-generating plant is negligible when compared to enormous area of land claimed by phytomass production: even if the generating station and its associated structures were to occupy 3,000 ha it would change the total land claim by less than 0.1%.
Low power densities of this mode of electricity generation prevent it from capturing anything but a very minor share of the overall supply. If only 10% of the US electricity generated in 2009 (that is 395 TWh or 1.42 EJ) had to be fueled by wood, then (with average 35% conversion efficiency) the country would require about 4 EJ (nearly 129 GW) of wood chips. With average power density of 0.6 W/m2 this would claim about 215 Gm2 of wood plantations and that area (215,000 km2) would be equal to nearly as much land as the entire Idaho or Utah.
This basic calculation also shows why even a realistically impressive increase of future phytomass harvest (due to better hybrids or to entirely new transgenic trees) would not make any fundamental difference as far as the very low power densities of phytomass production are concerned. Improvements of up to 25% would still require at least 250,000 ha of plantation trees to supply a plant with 1 GWe capacity. With even a doubling of today’s mean (at this time entirely unrealistic), such a plant would still need annual harvests of all above-ground phytomass from a square of 40 x 40 km. 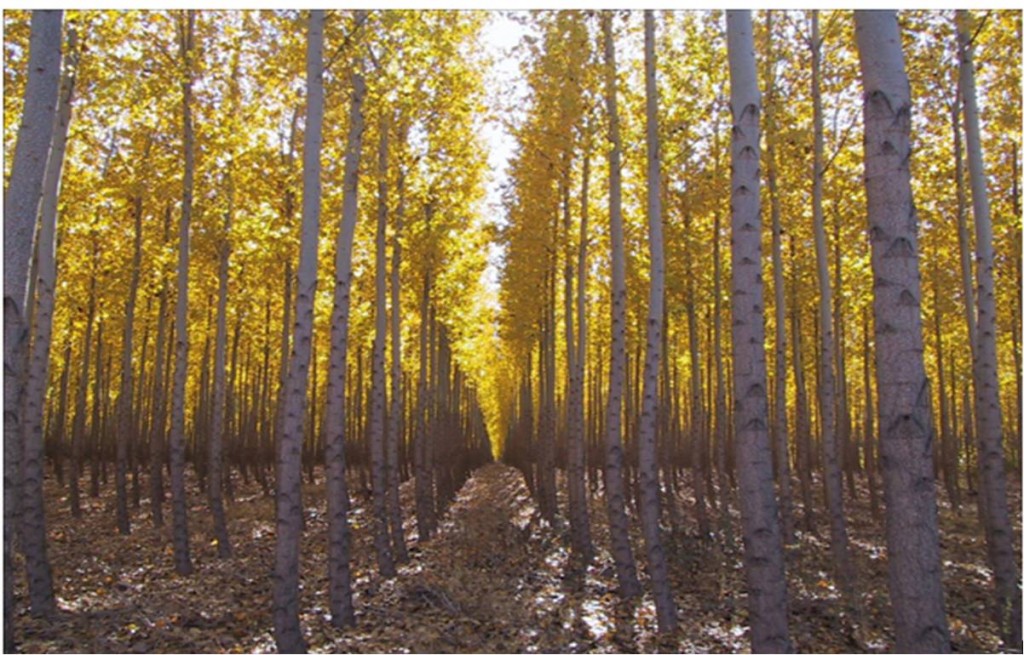 Plantation of fast-growing hybrid poplars: whole-tree harvesting of this phytomass has power densities below 1 W/m2.