In 2003 and again in 2005, Alan Greenspan, Chairman of the Federal Reserve Board, called on America’s governors and natural gas users to embrace vastly larger imports of methane energy. In his words: “North America’s limited capacity to import liquefied natural gas (LNG) has effectively restricted our access to the world’s abundant gas supplies.”

As he was speaking, a revolution was brewing under his feet. New methods of producing gas from unconventional resources–tight gas, coalbed methane (cbm) and shale gas–had greatly expanded the universe of gas resources available throughout the world.

By the end of that decade, the U.S., Australia and Canada would be able to book unconventional reserve additions in excess of annual production from all gas sources.

Production of Gas From Unconventional Sources: Experience in North America

So dynamic has been the process of conversion of unconventional resources into reserves for the three onshore options that unconventional gas production in 2010 accounts for about half of the US gas output and about 15% of Australia’s gas output. With output from traditional gas fields in North America declining it was believed that only vast imports of LNG, as much as 80 million tonnes per annum (mtpa), by some estimates, could meet the ongoing demand from the US. With imminent “shortages” on the horizon the general consensus was that the era of abundant hydrocarbon supply for the US was over. The alarm about US supplies was augmented with concern that Canada could no longer step in as a reliable supplier for the northern tier states.

What changed the North American supply picture, even as the worries about gas output reached a crescendo in 2005-2008, was the growing ability to produce gas from difficult geological structures at reasonable costs. The first of the unconventional resources to enter major production was tight gas. The key that unlocked this gas was hydraulic fracturing – pumping a water-sand mixture into the formation at very high pressures. So successful was this “fracking” that tight gas output has risen to roughly 25% of US gas production, about 5.2 tcf/y. Indeed, tight gas (see Figure 1) is no longer classified by the US Department of Energy (DOE) as unconventional. Even more important, the US service industry has learned to employ fracking as an ordinary, and quite cost effective tool. A strong support system of contractors, equipment suppliers, engineers and banks has developed in the US around fracking activities.

Without unconventional production U.S. gas output might be as low as 60% of current output, about 12–13 tcf.

As the maps of US unconventional gas clearly demonstrate, all three sources of new gas – tight formations, coalbed methane and shale gas – are found in roughly the same locales. The implications for integration of these reserves into the US gas transmission system are extremely favorable for the timely and cost-effective development of the unconventional sources.

The clearly inferred message from the US experience can be distilled in three points:

1. Unconventional gas resources appear in many areas that are gas prone for conventional resources – the three, tight gas, cbm and shale gas may occupy approximately different vertical strata of the same (or adjacent) formations;

2. Proximity of transmission infrastructure to unconventional gas basins speeds up the exploration and development process and reduces risks for all of the parties – E&D, producers, pipeline companies and consumers; and

The second leg of the unconventional triad was coalbed methane (see Figure 2). This resource, first noted in the 1980s in coal producing areas of the US, presented few technical issues, save water disposal. CBM generally is found at shallow depths and features natural reservoirs and traps. The conversion of the resource into reserves in the past decade added about 8% to US gas reserves during the 2000-2010 period. Production from coalbeds accounts for a similar share of US gas output (see Table 1) just under 2 tcf.

The final, and perhaps most significant element in the revival of the U.S. gas market was the application of fracking to shale formations at depths greater than 5000 feet (1.75 km). These formations, which occur throughout North America (see Figure 3 and Figure 5), now account for more than 10% of US gas production (~2.3 tcf/y), and are expected to level out at 4-5 tcf/y by the middle of this decade. The flattening of output is more a demand side than supply or cost driven event.

Using the vast US gas pipeline network producers of unconventional gas have been able to seamlessly integrate their output into the market (see Figure 4). Such integration has permitted much faster ramping up of production than might be the case in less flexible or less networked gas markets.

In the year since this table was published the US Department of Energy has revised upward its estimate of producible shale resources from ~340 tcf to 823 tcf. 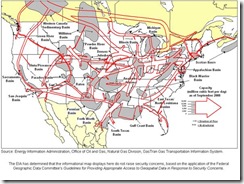 4: Proximity of Gas Transmission to Major Gas Basins in US 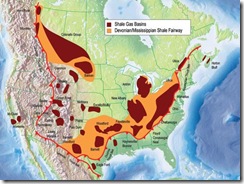 The extensive nature of these shale basins, especially the proximity to major demand centers in the US, has transformed the US gas market. Due to the expectations in the LNG supply industry of large US purchases the unconventional gas revolution has also transformed the Atlantic Basin gas markets (see Section 1.2).

What Has Unconventional Gas Meant for Atlantic Basin Gas Markets?

In addition to the loss of the US import market for LNG the unconventional gas revolution will turn both the US and Canada into competitors in the LNG markets. At Sabine Pass (Texas-Louisiana) and Freeport (Texas), proposed or operating LNG receiving terminals are adding liquefaction facilities. Total planned LNG export capacities for the Atlantic Basin locations will sum to more than 1.7 bcf/day (~13 mtpa). With prices set at a market hub (Henry Hub in Louisiana), unconventional production in North America has established gas-on-gas competition, cutting the strong link between natural gas and oil prices that has prevailed for years and still sets prices in Europe and Asia. Indeed, the long production life of shale gas in Canada has been seen by investors as sufficient to invest in Gas to Liquids production.

In the US shale gas production has led to investment in new gas separation facilities and a revival of moribund petrochemical firms.

With two market-based pricing points in the Atlantic, Henry Hub and the UK National Balancing Point, price discovery for LNG buyers is no longer shrouded in mystery. Moreover, both buyers and sellers can use these markets to hedge risk in gas supply. The strong physical value chain that has for so long characterized LNG transactions has been broken. Today, an LNG supplier to a US or UK customer has the option of making the physical delivery or, if prices are more advantageous, purchasing the gas in the domestic market for supply to the customer and selling the LNG elsewhere.

While these new market instruments are fully available only to US and UK gas customers and suppliers, the increased supply, improved transparency and additional flexibility have combined to put pressure on prices throughout the Atlantic Basin. Lower cost gas has opened up new markets for LNG – Dominican Republic, Jamaica, Honduras, El Salvador and Brazil, among others. Indeed, the increased flexibility and capability of the entire supply chain has made supply to smaller markets far more cost effective than previously.

Even where markets in gas hardly function, the impact of unconventional US production has still resulted in lower prices and more flexible supply terms. For example, a number of Russia’s gas customers have increased their purchases of attractively priced spot market LNG, putting pressure on Gazprom to reduce pipeline export prices, which they have done.

By making LNG more affordable throughout the Atlantic Basin the unconventional gas revolution has exposed regional pipeline and LNG exporters – Nigeria, Algeria, Egypt, and others) to increasing price competition. Overall, the cost-effective production of unconventional gas in the US has changed the calculus of the gas value chain, making domestic uses far more cost effective, especially as substitutes for refined oil products in heating, transportation and industry.

A likely next step for natural gas in North America is further penetration of power generation. With about 23% of the US generation market already, natural gas is poised to take additional market share from coal as older coal-fired plants retire in this decade and are replaced by cleaner gas-fired plants. The projected total uptake in the power sector could be as much as 4-5 tcf/y, leaving more than 22 tcf/y available for other uses.

Is Gas-to-Gas Competition Here to Stay in the Atlantic Basin?

It is tempting to dismiss unconventional gas as the “next great thing,” – the “fuel of the future and always will be.” However, the speed of reserve growth in the US and Canada, and the parade of potential new producers in Poland, Netherlands, UK and Ukraine point to a long-term trend. The impacts on market prices have been profound.

The conversion of resources to reserves in the US, now running at an annual rate of more than 20 tcf/y, results in a steadily rising gas reserve ratio for the US (and for Canada), even as production goes up. Though not as well explored as the US, producible shale gas resources in Europe are estimated to exceed 500 tcf. Drilling programs are active in several countries, including France, Hungary and Poland.

Analyses of LNG netbacks demonstrate repeatedly that the price pressure exerted by unconventional gas production in the US and Canada is on the order of $3-5/mmbtu. The impacts on prices indicate that even at relatively low levels of production unconventional gas can move market prices a great deal. The net reduction in LNG imports to the US compared with the predicted levels – the basis for strong LNG prices prior to mid-2007 – was just 0.6-0.7 tcf on an annualized basis. In other words, an reduction in US LNG demand equivalent to about 3% in US supply was sufficient to wreak havoc on Atlantic Basin markets.

With producible resources of several hundred tcf, shale production rates in Europe could achieve 1-2 tcf/y of output. Such production would represent more than 10 and as much as 25% of what Europe currently purchases from Russia, and 5-10% of overall consumption in Europe. Already, those European countries with active natural gas markets pay far less for LNG and pipeline supplies than those continuing to purchase LNG. Algerian netbacks for LNG sales to Spain are $1.50/mmbtu higher than for the UK market and more than $6.00/mmbtu greater than netbacks to Everett (US). For most of 2010 the UK netbacks were more than $2/mmbtu below those of Spain for Algerian or Nigerian gas exports.

Based solely on US and Canadian output of unconventional natural gas, gas-on-gas competition in the Atlantic Basin will remain a dominant force in price determination. With some output expected from the Netherlands, Poland, France, Ukraine and others, companies exporting to the Atlantic Basin cannot expect oil-linked premiums. Not all of that gas will be salable in Asian markets at premium prices eithers. Though late to the game Asia’s role in unconventional gas may be just as dramatic as North America’s.

This theme is explored in Part 2 of this post.

Current US production is about 22.5 tcf/y.

See AEO 2011, Early Release Overview, 2010, page 8. This figure is not the same as proved reserves, but represents resources that are producible with current economic and technical conditions.

One estimate of the savings to Mexico due to the “shale gas effect” is about $10-11 billion annually in comparison with oil-linked LNG supply contracts (see http://www.gartenrothkopf.com/gr-energy-climate-briefs/foreign-investment-in-us-shale-plays-earning-while-learning.html). The impact on LNG cargo prices, as seen in the Oil and Gas Journal, is $4-5/mmbtu (see http://ogjresearch.stores.yahoo.net/lngneprwda3t.html).

Qatar is excluded from this list. It is understood that the very low costs of production from that emirate’s North Field can withstand wellhead netback values under $1.00/mmbtu, well below other LNG competitors.

The Energy Information Administration of the US Department of Energy notes that shale gas reserves growth has exceeded total US gas production from all sources since 2008.

See any issue of the Oil and Gas Journal over the past two years, for LNG netbacks.