“The anti-fossil fuel environmental movement is in despair. For decades, proponents of the ideology of sustainable development preached that humanity was running out of oil and gas, that consumption of hydrocarbons was destroying the climate, and that renewable energy was rapidly becoming a cost-effective alternative. But the Shale Shock has slain peak oil and promises low-cost oil and gas for centuries to come.”

The world has changed. Although few yet understand it, the revolution in the production of oil and natural gas from shale has altered the course of global energy, affecting most of the world’s people. This is not a short-term event. Citizens, industries, and nations will be impacted for decades to come. 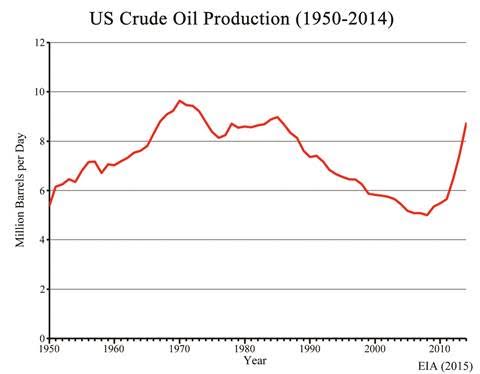 For more than a century, geologists searched for pockets of oil and gas between rock layers. But by using the technological advancements of hydraulic fracturing, or fracking, and horizontal drilling, geologists learned how to squeeze oil and gas out of the rock itself. Shale is a common rock formation that covers large areas in the US and other nations. In a 2013 study, the Energy Information Administration concluded, “…the world shale oil and shale gas resource is vast.” The shale revolution has opened additional centuries of low-cost hydrocarbon resources to modern society. 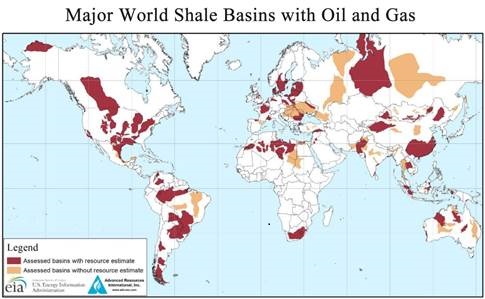 On the world stage, the most obvious Shale Shock impact is the precipitous drop in world oil price. The price of a barrel of West Texas crude dropped from $106 in July, 2014 to $53 in January of this year. Prices have now fallen to under $45 per barrel, a level not seen since 2009. Our current $2.50 price for a gallon of gasoline is a direct result.

For the first time in four decades, the world market price for petroleum is determined by competition. The Organization of Petroleum Exporting Countries (OPEC) can no longer dictate the price of crude oil by restricting production. Small firms that led the shale revolution, such as Baker Hughes, Cabot Oil & Gas, and Range Resources, now have the ability to quickly ramp or reduce production from shale fields, depending on market price. Big oil firms like ExxonMobil and BP are reacting to the Shale Shock along with everyone else.

It appears that low oil prices are the new normal. In the shale fields, oil production per drilling rig has increased 500 percent in the last seven years. Energy expert Mark Mills of the Manhattan Institute estimates that the fracker cost will soon drop to $20 per barrel, on par with the low-cost oil fields of Saudi Arabia. 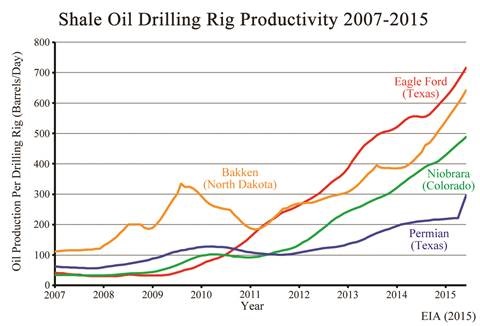 The geopolitical implications of the Shale Shock are huge. Low oil prices have crippled the economies of oil-baron nations Venezuela and Nigeria. Food and medicine shortages are rampant in Venezuela and prices are soaring. Oil provides 80 percent of the government revenue of Nigeria, where low prices have forced budget cuts and stimulated civil unrest. In Russia, oil and gas account for over 50 percent of the national budget and 75 percent of export revenue. The Russian ruble has weakened to 71 rubles per dollar, halved in value over the last year.

On the positive side, affordable prices are great for consumers and the world’s poor. Lower oil prices are reflected not only in energy but also in transported food and consumer goods. Low prices are boosting the economies of nations not dependent upon hydrocarbon production.

The anti-fossil fuel environmental movement is in despair. For decades, proponents of the ideology of sustainable development preached that humanity was running out of oil and gas, that consumption of hydrocarbons was destroying the climate, and that renewable energy was rapidly becoming a cost-effective alternative. But the Shale Shock has slain peak oil and promises low-cost oil and gas for centuries to come.

Oil and gas from shale will provide irresistible pressure for global carbon dioxide emissions to increase. Environmental groups are engaged in an all-out effort to stop fracking, but these efforts will ultimately fail. The world’s one billion automobiles today will double to two billion in the next 40 years, buoyed by inexpensive hydrocarbon vehicle fuel.

Electric cars and biofuels are already being impacted. US sales of hybrid and plug-in electric vehicles fell fifteen percent in the first half of 2015 compared to last year. Ethanol vehicle fuel, an alternative when gasoline was priced at $4 per gallon, is no longer competitive.

Natural gas from the shale revolution provides a tremendous advantage for our nation. US natural gas prices are one-half those of Europe and one-third those of Japan. Inexpensive gas now powers a growing number of power plants, keeping US electricity prices low. Global chemical producers are relocating to the US to utilize low-cost ethane feedstock from natural gas.

The shale industry will provide a US competitive advantage for many years. More than two billion well-feet of horizontal shaft have been drilled in the US over the last 20 years, a distance equal to 15 times around the Earth. Fracturing is just starting in China, Argentina, and the United Kingdom, but such efforts are more than a decade behind.

The Shale Shock is a tribute to US hydrocarbon geologists and to human ingenuity.  Dozens of small companies perfected hydraulic fracturing, launched the shale revolution, and changed the world. As the late economist Julian Simon pointed out, the greatest resource of mankind is not material in the ground, but the ingenuity of people operating in a free society.

Steve Goreham, Executive Director of the Climate Science Coalition of America, is author of The Mad, Mad, Mad World of Climatism: Mankind and Climate Change Mania.

One Comment for “Shale Shock: A New, Better Energy World”