“The global temperature “savings” of the Kerry-Lieberman bill is astoundingly small—0.043°C (0.077°F) by 2050 and 0.111°C (0.200°F) by 2100. In other words, by century’s end, reducing U.S. greenhouse gas emissions by 83% will only result in global temperatures being one-fifth of one degree Fahrenheit less than they would otherwise be. That is a scientifically meaningless reduction.”

Senators John Kerry and Joseph Lieberman have just unveiled their latest/greatest attempt to reign in U. S. greenhouse gas emissions. Their one time collaborator Lindsey Graham indicated that he did not consider the bill a climate bill because “[t]here is no bipartisan support for a cap-and-trade bill based on global warming.” But make no mistake. This is a climate bill at heart, and thus the Kerry-Lieberman bill sections labeled “Title II. Global Warming Pollution Reduction.”

That is, unless the rest of the world—primarily the developing nations—decide to play along.

In fact, the United States and the rest of the developed countries have little role to play in the future course of global warming except as developers of new energy technologies and/or as guinea pigs of making do with less fossil fuels.

Our attempts at domestic emissions savings will have only minimal direct climate impact, but instead they will serve as an example for the developing world of what, or what not, to do. So if Kerry and Lieberman were interested in directly tackling the climate change issue, they would be working with China’s National People’s Congress to draft legislation to reduce greenhouse gas emissions, not the U. S. Senate.

But, everyone already knows this, as we demonstrated the non-impact of U.S. emissions reduction efforts in Part I and Part II of our analysis of last summer’s Waxman-Markey offering. And as far as the global warming goes, Kerry-Lieberman’s The American Power Act of 2010 is similar to Waxman-Markey’s American Clean Energy and Security Act of 2009.

The impact of this slight emissions difference on the resulting future global temperature savings is not manifest until the third digit past the decimal point—in other words, thousandths of degrees C. Climatologically, in other words, the bills are identical.

As in our prior analyses, we use the same techniques employing a climate model simulator to derive global temperature (and sea level) projections from the greenhouse gas emissions scenarios. We use the Intergovernmental Panel on Climate Change’s (IPCC) “business-as-usual” scenario (A1B) as the baseline, and then modify it to take into account the Kerry-Lieberman emissions targets for the U.S. 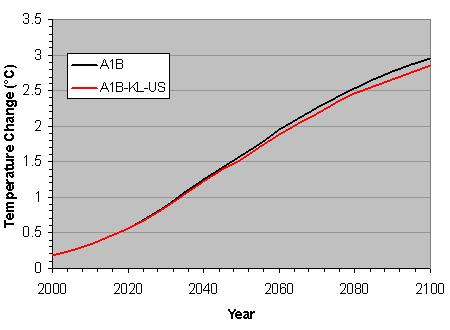 The global temperature “savings” of the Kerry-Lieberman bill is astoundingly small—0.043°C (0.077°F) by 2050 and 0.111°C (0.200°F) by 2100. In other words, by century’s end, reducing U.S. greenhouse gas emissions by 83% will only result in global temperatures being one-fifth of one degree Fahrenheit less than they would otherwise be. That is a scientifically meaningless reduction. 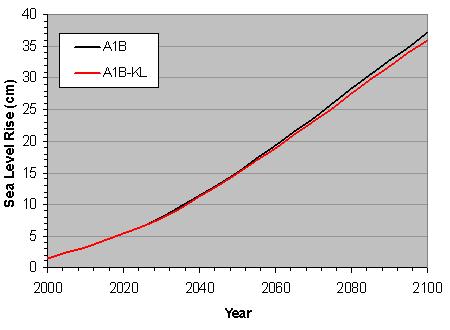 As I mentioned previously, the real impact of the Kerry-Lieberman bill only emerges if it is applied to the rest of the world, and in particular the world’s developing nations.

Figure 3 shows the global temperature projections from the BAU scenario, along with the successive adherence to the Kerry-Lieberman emissions schedule by the U.S., the OECD90 countries (industrialized countries including the U.S., Western Europe, Australia and Japan), and the entire world. Basically, unless the developing world comes on board, the world’s future temperature pathway will be largely unchanged. 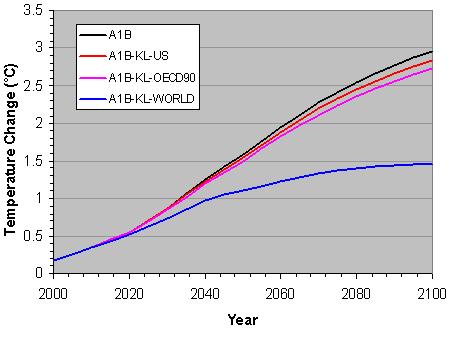 Granted, all my numbers may change a bit if different assumptions are made about the baseline scenario, the particulars of international cooperation, or the various parameters of the climate model simulator (for example, I used a climate sensitivity of 3.0°C). But the bottom line will remain the same—climatologically, the Kerry-Lieberman American Power Act, in and of itself, is a meaningless bill. To make it effective, it must involve the world’s developing counties.