Ed. note: This three-part post series (Part II: Coal Issues tomorrow; Part III: Federal Lands Potention on Friday) is taken from testimony presented by Mary J. Hutzler on February 5, 2013, before the Subcommittee on Energy and Power, Committee on Energy and Commerce. The hearing was titled: American Energy Security and Innovation: An Assessment of North America’s Energy Resources. A summary of her remarks is here.

The United States has vast resources of oil, natural gas, and coal. In just a few short years, a forty-year paradigm that the U.S.  was energy poor has been reversed. The world’s mineral-energy resource base is enlarging, not depleting–and leading the way is the U.S. with private firms exploring and producing from private lands.

In December 2011, IER published a report entitled North American Energy Inventory that provides the magnitude of these resources for the United States, Canada, and Mexico. [1] As the report shows, the United States is vastly endowed in all three forms of organic fossil energy. In fact, the amount of technically recoverable oil in the United States totals almost 90 percent of the entire oil reserves in the world. [2]

That amount of oil can satisfy U.S. oil demand for 250 years at current usage rates or it can fuel every passenger car in the United States for 430 years. It is also more oil than the entire world has used in all human history.

The technically recoverable coal resources in the United States are unsurpassed and total 50 percent of the world’s coal reserves. At 486 billion short tons, it can supply our country’s electricity demand for coal for almost 500 years at current usage rates.

The reason why technically recoverable resources are important is that they become reserves when one or more of the following occurs:

For many years, we have heard of fossil fuels reaching their peak production levels or at the verge of being depleted. In 1855, an advertisement for “Kier’s Rock Oil” indicated “…Hurry, before this wonderful product is depleted from Nature’s laboratory!” and that was four years before the first U.S. oil well was drilled! And in 1919, David White, the Chief Geologist of the United States Geologic Survey stated “…the peak of [U.S.] production will soon be passed—possibly within three years.”

And the peak production myth was not confined to just oil. For example, in January of 2007, Paul Hanrahan, the Chief Executive Officer of AES Power stated “The U.S. is running out of natural gas—production is declining and demand growing—so the expectation is that the import levels will go from 3 percent today to about 24 percent in 2020.”

Forecasters such as the Energy Information Administration were predicting that there would not be enough North American natural gas to meet demand and that we needed to build facilities for importing liquefied natural gas. Just a few years later, we find instead a shale gas boom and economics dictating that those importing facilities will become terminals for exporting natural gas as long as the government approves.

The same is true for the myth of ‘peak’ coal. In 2007, David Hughes, Geologist for the Geological Survey of Canada, stated, “Peak coal looks like it’s occurred in the lower 48.” And yet, the United States still has the largest coal reserves in the world. Rather than depletion effects, our coal industry is faced with overly broad and restrictive regulations on the use of coal and increasing restrictions on coal production from the U.S. Environmental Protection Agency.

The reason for the boom in both oil and natural gas production in the United States is that our oil and gas industry was able to revolutionize drilling and production from shale formations by combining hydraulic fracturing and horizontal drilling technology. Hydraulic fracturing uses water, sand, and trace amounts of chemicals to break apart the shale rock and horizontal drilling allows the oil to be produced from the shale formations which, vein-like, run parallel to the surface thousands of feet below.

Hydraulic fracturing has been in use since the 1940s, but combining fracturing with horizontal drilling allows much more of the oil and natural gas to be extracted than if the hydraulic fracturing was only used in vertical wells. When combined with the incredible advances in computer interpretive capabilities, an energy miracle is afoot.

That these technologies have combined to revolutionize the industry can be seen from the following example. In 1995, before hydraulic fracturing was being used in shale oil and shale gas drilling, the U.S. Geological Survey (USGS) estimated that the Bakken formation held 151 million barrels of technically recoverable oil.

But in 2008, after the impact of hydraulic fracturing and horizontal drilling was included in the USGS’s assessment, the estimate of recoverable oil in the Bakken jumped by a factor of 25. [6] The oil was always there, but it was human ingenuity, free enterprise and the application of technology—the things that have always made America great—that combined to free these energy riches.

Unlike the large oil fields of the past few decades such as the fields in the Gulf of Mexico or Prudhoe Bay, Alaska, these new shale fields are mostly on private and state lands. As a result, total U.S. oil production has increased, in spite of the federal government leasing fewer and fewer acres for energy production.

The outlook for natural gas production in the United States has dramatically changed over the last decade. Just a few years ago, U.S. manufacturing facilities were moving abroad to pursue more affordable gas. At the time, the U.S. had relatively high natural gas prices.

Now, due to hydraulic fracturing technology, energy companies are considering building liquefied natural gas terminals to export natural gas and new manufacturing plants are springing up around the country. The boom in natural gas production has completely changed the natural gas landscape and has greatly lowered natural gas prices for consumers and industrial users.

Lower energy prices benefit the entire economy, but especially the economically disadvantaged and those on fixed incomes. Expanded energy production resulting in lower prices is thus a benefit to society. 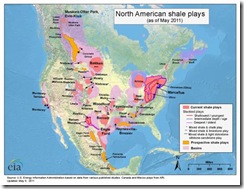 The increase in hydraulic fracturing, however, has led to attacks on natural gas production. Many special interest groups have launched anti-hydraulic fracturing campaigns, claiming that it is a new, dangerous technology that contaminates groundwater. But the reality is far different. Hydraulic fracturing has been used for over 60 years in over one million wells. Despite this widespread use—much of which occurred well before there were as rigorous state regulatory programs as there are today—there are no confirmed cases of groundwater contamination from hydraulic fracturing. If there was a problem, it would have shown up by now.

Another area of potential oil growth is oil shale, a sedimentary rock that contains kerogen, a solid organic material. When the kerogen is heated to high temperatures, it releases petroleum-like liquids that can be processed into liquid fuels. The USGS estimates that U.S. oil shale resources total 2.6 trillion barrels of oil; about one trillion barrels of which are considered recoverable under current economic and technological conditions. [11]These one trillion barrels are nearly four times the amount of Saudi Arabia’s proven oil reserves—a large enough supply for about 140 years at America’s current rate of oil use. Oil shale is concentrated in the western United States in Utah, Wyoming, and Colorado and mainly on Federal lands. 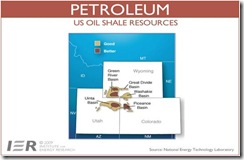 Despite the great promise these resources hold, one of the first acts of the Obama administration was to withdraw the research and development oil shale leases that the Bush administration had offered consistent with the Energy Policy Act of 2005. [12] Private sector research and development is necessary to bring these resources to market. Without these leases and the potential to commercialize the energy resource, companies will not invest the hundreds of millions of dollars required to develop the necessary technology. In Jordan, for example, Shell pledged to spend $500 million in exploration of the country’s oil shale resources in return for the right to develop these resources if the exploration was successful. [13] The potential that oil shale holds here in the United States can be seen by the following graph: 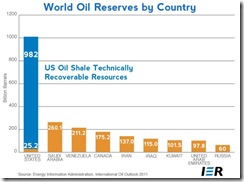 Another unconventional oil is oil sands. Oil sands are permeated with bitumen, which is a form of petroleum in solid or semi-solid state that is typically found blended with sand, clay, and water. Petroleum is extracted from oil sands by either traditional pit mining on the surface or in-situ production underground. Once extracted, the petroleum is diluted with condensate or other light oils or upgraded using processing units into a light, sweet “synthetic” crude oil.

Our northern neighbor, Canada, ranks third in the world in oil reserves (175 billion barrels) due mainly to its oil sand deposits. It is also the largest supplier of oil and petroleum products to the United States, supplying us with almost 3 million barrels per day. [14] Because of Canada’s large oil reserves, TransCanada proposed an addition to its Keystone pipeline system, the Keystone XL, which would move oil from Canada to U.S. Gulf Coast refineries, with a capacity of 830 thousand barrels per day.

The Keystone XL pipeline would not only move Canadian oil but it would also help to move oil from areas in the United States where it is land-locked, such as shale oil production in North Dakota and crude oil stored at Cushing, Oklahoma. However, before the pipeline can be built, it must receive a permit from the U.S. State Department indicating that it is in the ‘national interest’ since it would cross the U.S. border with Canada. The U.S. government has delayed, denied and delayed again its approval due to environmental concerns regarding its original proposed route that crossed an environmentally sensitive area in Nebraska. TransCanada then submitted a revised route that the state of Nebraska approved, but U.S. State Department approval is still under study.

In the mean time, TransCanada is building the southern section of the pipeline, from Cushing to the Gulf Coast refineries, which does not need a Presidential permit, but which will help with the oil that is being land-locked in Cushing. Construction of Keystone’s “Gulf Coast Project” began in the fall of 2012 and is expected to be in service by mid-to-late 2013.

The consequences for our neighbor and ally of pipeline construction delay has been a significant decrease in the price Canada receives for its oil, which in turn will reduce investment in Canadian energy production. Railroads are now moving oil, which is more costly and less safe than transport by pipeline.

Increased domestic production and increased imports from Canada along with approval of the pipeline could enable the United States to be almost independent of overseas oil in the future.