“People have since antiquity worried about running out of natural resources–flint, game animals, what-have-you. Yet, amazingly, all the historical evidence shows that raw materials–all of them–have become less scarce rather than more….  And there is no reason why this trend should not continue forever.”

There is only one thing that is going up more than government subsidies for uneconomic wind and solar power: oil, gas, and coal reserves and resources in the United States, according to a new study released yesterday by the Institute for Energy Research (IER) assessing total North American inventory.

The U.S. is the world’s most endowed energy country, followed by Russia, Saudi Arabia, and China. At current consumption rates, we have hundreds of years of domestic oil and gas, and thousands of years of coal.

Stephen Hayward explains this and more in this video: 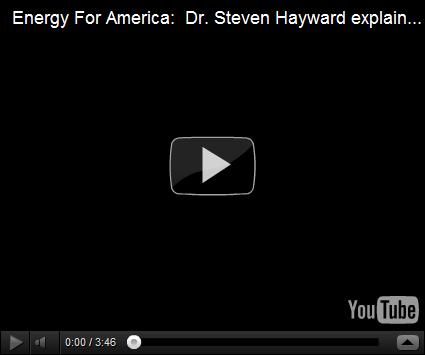 IER’s inventory of the energy resources of North America found:

“The current administration and its green energy allies in business and in Washington appear willing to drive up the price of energy for American consumers by limiting access to our vast resources. For the past several years, taxpayer dollars have been spent to fund unproven green energy pipe dreams, while Americans have been denied the opportunity to utilize the coal, oil, and natural gas that is literally under our feet,” said IER President Tom Pyle about the report.

“This energy report should change the conversation in Washington and promote policies that reproduce nationwide the energy boom in places like North Dakota, where unemployment is at now at 3.5 percent (the lowest in the nation) and domestic production on private lands has more than tripled in the last five years. The Institute for Energy Research is proud to release this report, the culmination of months of research and analysis by IER experts. We have drawn from a broad array of government, industry, and university data to present hard facts — not myths — about our energy future. The report presents a clearer picture than the anti-fracking, anti-drilling, and anti-exploring ideologues in Washington want the American people to see.”

Resources expand, not deplete, in free-market settings where the ultimate resource of human ingenuity reigns.

It is time to dismiss the false theories and facts of the “peak energy” school of thought and embrace an open-ended view of the resource-rich world. As Julian Simon explained in chapter 2 of his treatise, The Ultimate Resource 2:

Thus the existing “inventory” of natural resources is operationally misleading; physical measurements do not define what we will be able to use as future supplies.