Should Nuclear Power Qualify as “Renewable” in the RPS/RES Debate?

As a physicist, my belief is that one of the reasons that intelligent energy policies have not gained sufficient traction is that we are allowing those with political agendas (vs scientists) to define some key energy terms. And as a golfer, I know that a wager can be won or lost at the first tee — where the terms and conditions are agreed on.

Outside of “fiscal responsibility” probably the most significant misused concept that we have unwittingly gone along with is the term “renewable energy”. Giving some critical thought to this moniker is no academic matter, as the majority members of the U.S. Senate’s Energy Committee are currently pushing for a national Renewable Portfolio Standard (RPS), or what is now called the Renewable Electrical Standard (RES). Their decision as to what is a “renewable” will have profound technical, economic and environmental consequences on the United States.

To my knowledge there is no “official” definition of this bandied about term. When asked, the meanings proffered vary quite a bit, but the key difference between a renewable and non-renewable is usually the rate of replenishment. “Renewable is an energy resource that is replaced in a reasonable amount of time (our lifetime, our children’s lifetime),” the thinking goes.

The reason the definition of renewable is focused on time, derives from the concern that we may exhaust some electrical energy sources, relatively soon. But how much is enough to have? For instance, if we have 100 or 250 years of some particular fuel, would the replenishment rate really be that important?

Clearly, within the next 100 years of use, there will be some profound changes made regarding the efficiency and applications of said fuel’s implementation—in ways we have little understanding of today.

Look at the well-reasoned expectations that were had in 1950 about what would happen in year 2000. The message is that almost ALL of the best guesses were wrong. In the same vein, prior technology predictions by experts (like Einstein) have also proven to be significantly off the mark. Who among us will stand to say that we
have a better understanding of technology than did Einstein?

In that light, let’s look at the case for nuclear being “renewable.” First we should answer how much longer will our nuclear fuel supply last. Consider:

a) This source says: “The Organization for Economic Cooperation and Development (OECD) and the International Atomic Energy Agency (IAEA) in 2008 jointly produced a report saying that uranium resources are adequate to meet nuclear energy needs for at least the next 100 years at present consumption levels. More efficient fast reactors could extend that period to more than 2,500 years.”

It is absurd to say that a 2,500 year supply doesn’t qualify this as renewable.

b) In addition, there are several proven alternatives to uranium as a source. One example is Thorium (which is much more plentiful than uranium). [Read the end of this for a superior discussion about “The Sustainability of Mineral Resources” (and specifically uranium).

c) Bernard Cohen (Professor Emeritus of Physics at Pittsburgh University) has stated that breeder reactors have enough raw material energy source to last us over a Billion years. That’s Billion with a “B”.

When considering these sample facts, an important thing to keep in mind is this quotation from some scientists at an excellent University of Michigan site: “Only 40 years ago, nuclear energy was an exotic, futuristic technology, the subject of experimentation and far fetched ideas.”

Hard as it might seem to believe, most of this nuclear development has occurred in just the tiny space of 50± years — so having any fuel supply that lasts 100± years could cover an enormous amount of new development.

Some definitions of “Renewable” include a reference to “power derived from natural sources” (e.g.  here). Of course that is amusingly non-descriptive since essentially all sources of electrical power are based on natural materials, and that includes nuclear. To read more about this I’d strongly recommend Bill Tucker’s excellent book Terrestrial Energy, or the more condensed discussion he wrote here.

Another factor sometimes appearing in the definition of “Renewable” is a reference to a power source’s ability to reduce CO2 (i.e. to be a “clean” source). That same University of Michigan site (above) has this very informative graph about how (worldwide) we have been able to reduce CO2 since 1973. 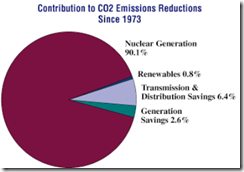 Now, for the sake of comparison, let’s quickly look at the flip side of this question, at the poster child for renewables: wind energy. The indisputable fact is that an indispensable part of wind power electricity production is the requirement of LARGE amounts of land. For instance, best estimates are that wind energy requires more than a thousand times the land that nuclear does, to generate the equivalent amount of 24/7 power.

BUT, that essential element of wind energy generation (land) is not renewable by anyone’s standards as it is not “replaced in a reasonable amount of time.” Before a source is labeled as “renewable” shouldn’t ALL of its major components be renewable? Otherwise, it would be like having all the materials to assemble a car, but no tires.

The evidence says that we will run out of appropriate U.S. land for industrial wind energy before we run out of fossil fuel for electrical power sources. So considering this information, which is the true renewable: wind energy or nuclear power?