Renewable Energies: The Mirage of Mass

“Wind power’s growth is challenged because the best sites for windmills have already been exploited, the end-of-life mills are being torn down, subsidies are declining, and some of the enthusiasm for windmills departed with former DOE Secretary Dr. Chu. The new Secretary, Dr. Muniz, believes in solar.”

As most people are, I too am subjected daily to the mass media reports that broadcast the need for building renewable, clean energy sources. Those sources are usually identified as “wind, solar and others” followed by a hint at their rapidly increasing output.

Suspicious, I looked up the sources and their annual output as compiled by our Department of Energy (doe.eia.gov). The result are plotted in the two attached graphs. The upper one shows the “Other” sources, the lower one “wind and solar.” 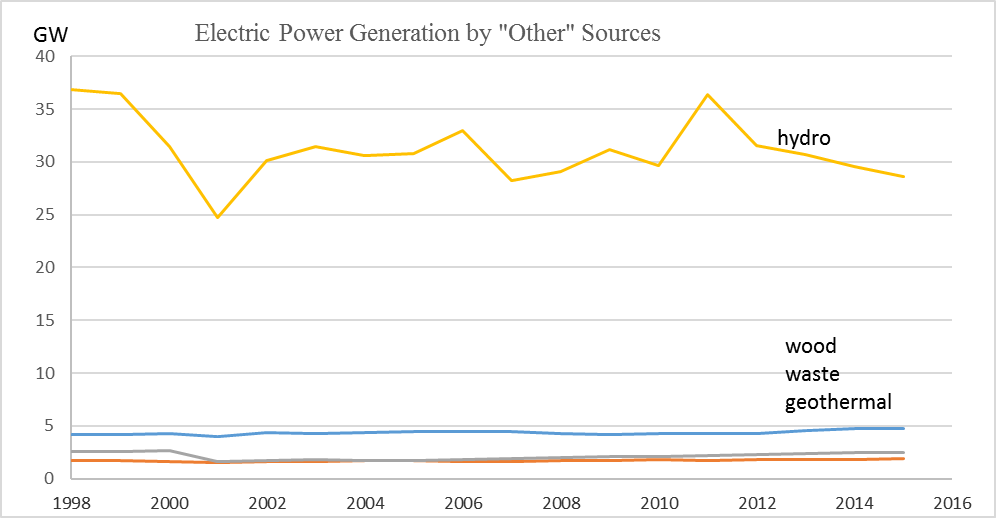 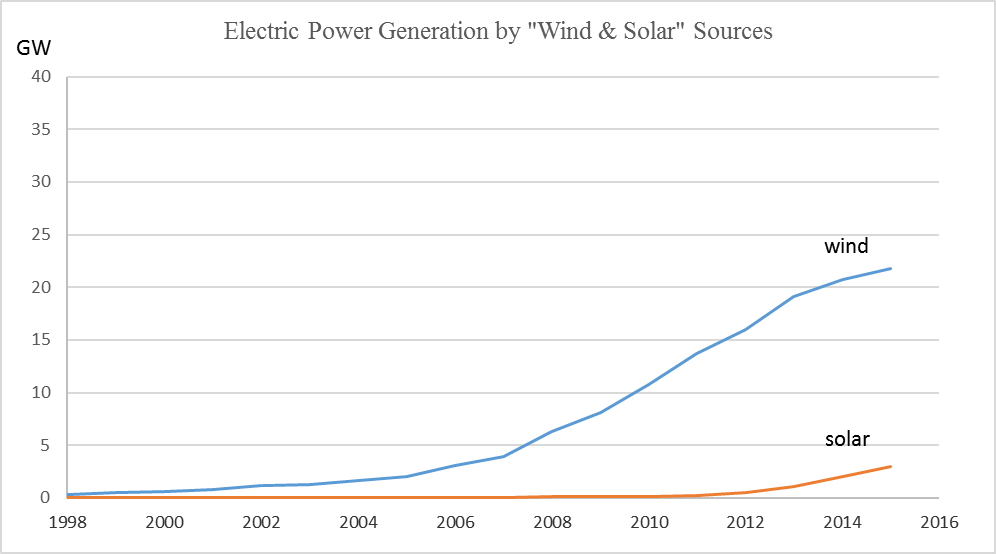 Looking at the four sources in the upper graph, hydro, wood, waste and geothermal, there has not been a worthwhile upward trend in any of them for two decades. Their combined output is lower today than it was in the decades past.

Three of the four sources provide a minuscule amount of energy in comparison to hydro. Two of the three weak ones, wood and waste, are not classified as clean sources for their burning emits CO2 along with “real” pollutants. The legitimate clean output of the three then originates only from the geothermal source. It generates 1.9 GW, unchanged in decades.

The fourth source – hydro – provides 29 GW which is 94 percent of the 30.9 GW yield from this group of clean, renewable sources. To increase hydro, it would have to either rain more or we would have to reduce irrigation (dams often serve both purposes). The rain is beyond our control and the irrigation – are we willing to cut down on fresh veggies?

It should also be pointed out that this source, as well as the other three, cannot be claimed a result of the last decades’ financing. They existed long before the clean-energy budgets existed.

The real growth originates thus from just two of the six sources: wind and solar (W&S). Their contribution is illustrated in the lower chart. When combined, W&S generated 24 GW, somewhat less than the old-timer hydro. Wind growth is shown slowing down while solar, the smaller of the two, turned linear for 2015.

Wind power’s growth is challenged because the best sites for windmills have already been exploited, the end-of-life mills are being torn down, subsidies are declining, and some of the enthusiasm for windmills departed with former DOE Secretary Dr. Chu. The new Secretary, Dr. Muniz, believes in solar.

Let’s now consider the contribution of the renewables’ combined 55 GW on the scale of the U.S. energy usage of 467 GW for electricity and 3,260 GW for primary energy in 2015. The W&S would have to produce additional 412 GW for 100 percent renewable electricity generation. Should electric cars become ubiquitous (they will not) they will consume another 110 GW lifting the total to 522 GW from the 2015 level.

Apparently not. There is also no chance that the US, or individual states, will meet the repetitious commitments for 20, 50 or 100 percent of energy to “be derived from renewable, clean sources” in the usual 5, 10 or 20 years timetable, numbers repeatedly proposed by the facts-ignorant politicians and prejudiced media in cohorts with the “Big Wind and Big Solar” interests.

The question is now how many billion dollars were spent on developing wind and solar to get the above gigawatts. Unable to find a reliable number I will, instead, in Part II compare the budget vs. output of the largest, newest, and allegedly most efficient solar plant operating in Mojave desert and compare it to another type of clean power plant.

Some dozen years ago, I won the best-letter-to-editor award from Hartford Courant when commenting on the then-planned goal of 20 % of Connecticut energy from clean sources by 2010. I wrote: “It will not be done.” It was not done, nor was it done with subsequent such proclamations. We can safely assume the same fate for the currently debated commitments.

I can be challenged on the last statement, because, fortunately for the politicians’ carriers, the meaning of the term “clean and green” is somewhat flexible in those circles. The above numbers, the graphs, and the proper meaning of terms should help us challenge the “green” media and the other-people-money-spending politicians.

Stan Jakuba has had a distinguished career in mechanical design and development in both private industry and Government, particularly with alternative-fuel engines and near-zero pollution automobiles. He has provided engineering and educational services to dozens of companies, ranging from GM and GE to small R&D firms.