‘Grid Parity’ for Renewables: An Empty Concept (Part I)

“Coal, natural gas, nuclear, and hydroelectric power are essential because they are predictable and dispatchable resources; conversely, renewables produce power intermittently and are less valuable as a generation resource…. To reach true grid parity, an energy source should be able to produce affordable electricity as well as dependably meet electricity demand.”

The idea of cost-competitiveness for renewable energy resources—called “grid parity”—is misleading and incomplete without considering reliability. Yet recent reports are pushing grid parity as an imminent reality. For example, a February 2016 study from GTM Research assessed that electricity from residential solar has attained grid parity in 20 states.

The Concept of Grid Parity

The National Renewable Energy Laboratory describes grid parity as the “break-even” cost for electricity from a renewable energy source in relation to “electricity purchased from the grid.”[1] In other words, grid parity is attained when an energy source, such as solar power or wind energy, reaches cost-competitiveness on the electric grid with conventional sources of generation such as coal and natural gas.

Nevertheless, strictly focusing on the cost of electricity ignores other important factors that affect an energy source’s relative value on the power grid. For instance, electricity supply and demand must be continually balanced to provide consistent, stable, and reliable power for American households and businesses.

Consequently, most generation resources fulfill different roles on the grid, including baseload (for a continuous supply of electricity), intermediate (for following daily, predictable rises and falls in demand), or peaking capacity (for ramping up and down quickly to meet peak demand). Natural gas, coal, nuclear, and even hydroelectric generating units can effectively fill these various roles.

Conversely, wind and solar are intermittent and only produce electricity when the wind is blowing or the sun is shining. Due to their inherent limitations, renewables are less useful for electricity generation than conventional sources. As a result, true grid parity should go beyond prices and consider the comparative functionality of various energy sources.

The Challenge of Dispatchable Power

The issue of being able to “dispatch”—or turn on or off—energy when it is demanded is an essential aspect of electricity generation that grid parity hardly addresses. Focusing merely on price competition ignores the crucial way that an electricity source functions on the grid and relates to other sources.

Numerous experts emphasize the importance of on-demand power generation. The nonpartisan U.S. Energy Information Administration (EIA) distinguishes between dispatchable sources (e.g., coal, natural gas, and nuclear) and non-dispatchable ones (e.g., wind and solar) in its calculation of the levelized cost of electricity (LCOE) “because caution should be used when comparing them to one another.”[2]

Another analysis from the Council on Foreign Relations also recognizes the problems posed by non-dispatchable, or intermittent, electricity sources. In essence, the analysis argues that the “unpredictability” of renewable generation makes other power plants less efficient because coal and natural gas must back up solar and wind when the sun does not shine or the wind does not blow.[3] A report on Seeking Alpha concurs, arguing that it “makes very little sense to compare the relative costs of these intermittent sources of energy to a dispatchable source of energy.”

Since renewables do not operate on the grid in an equivalent way to dispatchable electricity resources, true grid parity cannot functionally be achieved. As a result, grid parity is an empty concept because it ignores essential elements of energy generation: electricity sources should produce power predictably and reliably respond to demand.

Plenty of research highlights the fundamental problems with renewable energy and casts doubt on its ability to achieve grid parity.

EIA uses the LCOE to make comparisons about the cost-effectiveness of different electricity sources. According to EIA, electricity from new conventional combined cycle natural gas will be $75.2 per megawatt hour (MWh) in 2020, while wind and solar PV will cost $73.6 MWh and $125.3 MWh, respectively. As previously noted, EIA emphasizes that researchers and energy analysts should be cautious when directly comparing dispatchable and non-dispatchable sources because they function differently on the grid:

Since EIA calculates only levelized electricity costs for new power plants, the Institute for Energy Research (IER) commissioned a study to facilitate more accurate comparisons between wind and other generation sources. The study found that electricity from existing coal-fired power plants is about three times less expensive than electricity from new wind facilities.[5] The following chart from the report contrasts the affordability of different generation resources and shows that existing sources produce power less expensively than new sources.[6] 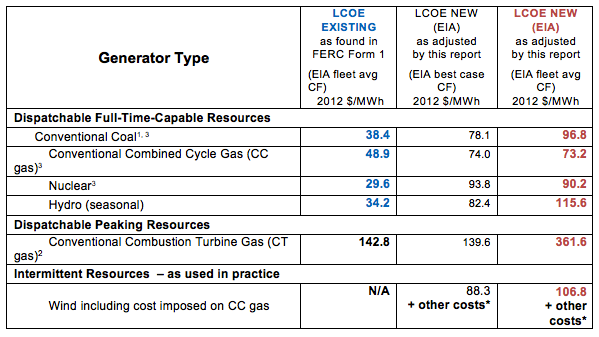 Additionally, the report calculated the “imposed costs” that wind power places on the grid. In essence, since intermittent generation forces dispatchable sources to operate less frequently and back down more often, existing power plants end up running fewer hours without any significant decrease in their fixed costs.[7]

The result is more expensive electricity. As previously economical power plants become more costly to operate, more of them will retire prematurely, potentially feeding a negative cycle of rising electricity prices. Generally, utilities pass on these higher costs to consumers.

As intermittent sources make electricity more expensive, grid parity becomes easier to achieve. For example, subsidies have increased the amount of installed solar capacity in Germany, even though the country has relatively poor insolation (i.e., Germany does not have an optimal—or even good—environment for solar power). After passing major renewable energy legislation in 2000, German electricity prices have doubled and are the second most expensive in Europe.

This “elevated electricity pricing” has made it easier for renewable technologies to reach grid parity where subsidies are high. But success of this nature is artificial; according to one commentator, “PV parity becomes a lot easier if the price of electricity is increased 50 to 100 percent by fiat.”[8]

New studies and reports that assert renewable energy sources have reached grid parity are misleading because they ignore the fundamentals of operating the electric grid. In order for the grid to function properly, supply and demand must be continually balanced.

Coal, natural gas, nuclear, and hydroelectric power are essential because they are predictable and dispatchable resources; conversely, renewables produce power intermittently and are less valuable as a generation resource. Cost and function should not be evaluated separately when considering grid parity. To reach true grid parity, an energy source should be able to produce affordable electricity as well as dependably meet electricity demand.

Part II of this analysis will investigate government policies that have enabled renewables to attain grid parity and discuss why subsidizing renewables is mistaken.

[5] Although IER’s study did not assess the LCOE of new solar PV, that source is most likely even more expensive than new wind resources. In fact, this supposition is supported by a Deloitte MarketPoint report, which determined, “Onshore wind is more likely to reach grid parity before utility-scale solar PV, under a wide range of assumptions.” See, Journey to grid parity, 2015, p. 1, http://www2.deloitte.com/us/en/pages/energy-and-resources/articles/journey-to-grid-parity.html.

Mark Febrizio is a policy associate at the Institute for Energy Research in Washington, DC.