Regulation of Public Utilities as a Pseudo Tax

“The very term ‘public utility’ … is an absurd one. Every good is useful ‘to the public’, and almost every good, if we take a large enough chunk of supply as the unit, may be considered ‘necessary’. Any designation of a few industries as ‘public utilities’ is completely arbitrary and unjustified.” – Murray Rothbard

Every American business and household is directly and indirectly impacted by the seemingly never-ending rise in public utility prices (including airports, electricity, gas, post, public transport, rail, seaports, telecommunications, and water & sewerage). State and federal regulation of these ‘so called’ natural monopolies (very worryingly, now including the Internet), in fact, virtually ‘locks in’ such an upward trajectory.

Consequently, consumers are paying a ‘pseudo-tax’ that is hidden from plain sight. This is in great part due to, as pointed out by economist Ludwig von Mises, that:

No alleged ‘fact finding’ and no armchair speculation can discover another price at which demand and supply would become equal. The failure of all experiments to find a satisfactory solution for the limited-space monopoly of public utilities clearly proves this truth.

I have worked in and around the regulation of public natural monopoly utilities for almost 20 years as an economist, regulatory expert and project manager.

At first, I believed that such regulation was fair and necessary as well as efficient and effective. The ‘cracks’ in this belief first started to appear for me in the late 1990s (when I was working for a state utility regulator in Australia). These cracks continued to widen for me as I experienced more and more utilities regulation (plus more and more life) around Australia and then in the UK in the late 2000s.

My time in the UK (plus my frequent travel to the U.S. then and since) blew these growing cracks wide open, along with my eyes … as it was in the UK that a rediscovered the Austrian School of Economics.

Almost everyone outside the world of Austrian Economics, including establishment free-market economists, unquestionably assumes the need for public utility regulation. This is, to borrow a ‘buzz word’ from the Left, unsustainable in both theory and practice, as evidenced by the following ten realities or Catch-22s of public utilities.

#1 Monopolies are unnatural (not natural)

#2 Markets are undefinable (not defined)

#3 Competition is a process (not a structure)

#4 Value is subjective (not objective)

#6 Weighted average cost of capital as interest and return (not)

#7 Incentives are profits and losses (not formulas and benchmarks)

#8 Information is created and decentralised (not given and centralised)

As a former mainstream or ‘lamestream’ economist myself, these ten Catch-22s can be put in the context of the orthodox framework of Industrial Organisation Economics as follows (which is a subset of Neoclassical Economics and by-and-large the basis for Regulatory Economics):

Orthodox economic theories on the market failure of natural monopoly versus perfect competition (along with competition policy and antitrust law approaches to market definition) provide most of the rationale for ‘heavy handed’ (price, service, etc) regulation of utilities, starting with standard economic theories of market structure. Even though many establishment economists acknowledge that natural monopoly and perfect competition are ‘blackboard’ ideals, at the end of the day they are still the benchmarks for whether to regulate or not … and to continue to do so, or not.

In both Austrian Economics theory and real world practice, markets are just a convenient and aggregated description of the constant flux of exchange opportunities created and discovered by suppliers and consumers with ‘skin in the game’. And, of course, “[d]efining a market narrowly enough will always yield market power; defining a market broadly enough may always yield perfect competition” thus “[a market] cannot be independently established as such apart from consumer preference on the market”.

As to perfect competition, perhaps economics Nobel Laureate Friedrich von Hayek said it best: “… competition is by its nature a dynamic process whose essential characteristics are assumed away by the assumptions underlying static analysis” thus “… perfect competition means indeed the absence of all competitive activities.”

More importantly, the little known history of natural monopoly (in the US, at least) teaches that there was plenty of effective competition (and its attendant decreasing costs and prices, and increasing quantity, quality, service and innovation) prior to the less effective competitors lobbying for market protection regulation in exchange for utility oversight regulation. In fact, the regulation of natural monopolies started well before the theory of natural monopoly. Plus, if a utility monopoly were natural (ie could produce at a lower total cost than all others, actual and potential) it would not be in need of all of the other types of regulations (intentionally and unintentionally) preventing market entry.

All the different approaches to market conduct under utility regulation are all founded on the (explicit or at least implicit) assumption that value (particularly costs) are objective and that they do (or should) determine prices. Firstly, costs are prices too, just from another’s point of view. Secondly, causation largely flows the opposite way from prices to costs, not costs to prices. Thirdly, all values (that determine opportunity costs and prices through exchange) are subjective not objective. Fourthly, pricing and other value related decisions are made at the margin … margin meaning ‘what happens next’, not necessarily one additional unit of output and certainly not an infinitesimal change as per the calculus.

All of this was established by one of the founding fathers of the marginal revolution in economics (for both Austrian and Neoclassical Schools), Carl Menger, who said: “Value is … nothing inherent in goods, no property of them. Value is a judgment economizing men make about the importance of the goods at their disposal for the maintenance of their lives and well-being. Hence value does not exist outside the consciousness of men.” Another way of putting this is: “Marx would say pearls have value because people dive for them (thus supplying labor). Menger would retort that people dive for pearls because people value them.”

It is also worth noting that in real world free markets, prices are determined in exchange by Eugen von Böhm-Bawerk’s marginal pairs, often between extremely narrow margins.

The regulatory debates in the US (and increasingly in the UK, Australia, NZ, etc) tend to center around returns only. In addition, such return debates outside the US (unlike where broader commercial and fairness factors are more important and explicit) are very much focussed around finance theory rather than finance practice … almost always the weighted average cost of capital (WACC) and the capital asset pricing model (CAPM), plus increasingly financeability.

It is important to understand that interest is more fundamental than just bank interest on money. As Hayek’s contemporary Murray Rothbard said, interest is: “… the pure exchange ratio between present and future goods. This rate of return is the rate of interest.”

Returns are, of course, profits and losses compared to assets and liabilities. Based on this and many other factors, entrepreneurs, savers, investors and others react to this and other information and thus set their expectations going forward for future returns. In this regard, Rothbard stated: “… there is no sense whatever in talking of a going rate of profit. … For any realized profit tends to disappear because of the entrepreneurial actions it generates.” He importantly added that: “A grave error is made by a host of writers and economists in considering only profits in the economy. Almost no account is taken of losses. … [from] when an entrepreneur has made a poor estimate of his future … .”

The reason this system of regulation is akin to a tax, is that unlike most other forms of regulation, it regularly produces readily identifiable impacts in the form of the regulated prices that have to be paid directly or indirectly by every business and household in the country. These pseudo-taxes are almost always on the rise like real taxes (as per the diagram below), and also like the latter include all of the predictable inefficiencies associated with government central planning (ie the government regulators) and government protected cronyism (ie the utilities themselves).

There have been few comprehensive empirical studies, but these show a poor performance for utility oversight regulation in terms of high prices (as well as low quantity & quality, poor customer service & innovation, etc). This is not surprising, given the lack of economic and political incentives to do so. 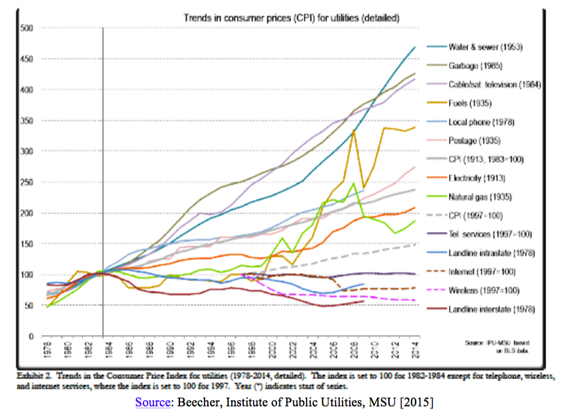 Like the Fed which does not control but creates inflation, this regulatory system does not control but creates monopoly prices … through such mechanisms as entry barriers, competition restrictions and substitution impediments as well as through regulatory capture and other Public Choice Theory effects. Even more fundamentally, these prices aren’t even real prices as such, due to the impossibility of socialist economic calculation. Thus, as Hayek once lectured other economists: “… the effects on policy of the more ambitious constructions have not been very fortunate … [due] to a pretense of exact knowledge that is likely to be false.”

In light of all this, it seems that is about time that some significant reform paths to genuine free markets (or at least more free ones) were more seriously considered in my two homes of the USA and Australia (and in the UK, NZ and elsewhere). Pro choice and competition reforms not only need to take genuine steps in the right direction towards free markets (without offsetting steps backwards, at the same or over time), but should also focus on the main game of removing government’s own barriers to market entry … along with it’s other barriers to buyers, capital, complements, cooperation, rivalry, substitutes, suppliers, etc.

Hopefully the gaping theoretical, statistical and historical shortcomings of public utilities regulation can be put more and more on the ‘radar’ of the long suffering businesses and households of America and the Western world. I would like to do this, in particular, through writing a book and the establishment of a new think tank (or a new area within a current think tank) devoted to such regulation, reform and deregulation. This is especially the case, given what one of the 20th century’s greatest libertarians and renaissance men pointed out:

“The very term ‘public utility’, furthermore, is an absurd one. Every good is useful ‘to the public’, and almost every good, if we take a large enough chunk of supply as the unit, may be considered ‘necessary’. Any designation of a few industries as ‘public utilities’ is completely arbitrary and unjustified.” – Murray Rothbard

D. Brady Nelson is a Washington D.C. based ‘Austrian school’ economist, writer, and speaker. He is from Milwaukee, Wisconsin, and spends time in Brisbane Australia, He specializes in regulatory economics with the Heartland Institute, and writes for Townhall Finance and Townhall. This post is extracted from a recent column for Townhall Finance and a 2014 post for Mises Canada.