Major wind projects are being cancelled or put on hold with waning public and private support. In recent weeks,

In each case, company officials blamed current market conditions and the inability to secure a long-term power contract with area utilities.

The American Wind Energy Association (AWEA) insists the industry is at risk of a slow-down if Congress does not act quickly to extend the Production Tax Credit (PTC), the federal incentive most often credited for market growth in the wind sector. The PTC expires at the end of 2012. [1]

But if the PTC were to expire, the damage would be less than what the AWEA claims.The industry has clearly grown addicted to the production tax credit, but our findings suggest that attributing market activity to the PTC is overly simplistic and fails to consider other crucial (government) factors driving wind development in the U.S.

The PTC was established by the Energy Policy Act of 1992 to stimulate use of renewable technologies for power generation by providing a production-based credit for the first 10 years of project operations. Initially set at 1.5¢/kWh, the credit is adjusted annually for inflation and today stands at 2.2¢/kWh.

When adopted, the House Ways and Means Committee insisted on an expiration date (June 30, 1999) to give Congress an opportunity to assess the effectiveness of the credit in meeting its goal.

In each of the five years following the PTC’s enactment wind capacity declined. It wasn’t until 1998 and 1999 before the trend drifted upward. (see chart) 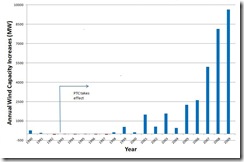 While it’s possible the market needed time to respond to the new subsidy, other more significant factors likely stalled growth.

The U.S. was awash in generation and oil prices were low and stable. Deregulation shifted plant ownership to independent power producers which led to improved plant management and increased efficiencies. This was particularly true for nuclear power where average capacity factors grew from 66% in 1990 to more than 90% currently.

The demand for renewable energy largely didn’t exist except in States with programs that encouraged renewable generation. It’s no accident that the bulk of new wind built in 1998–99 occurred in four states with renewable mandates — California, Iowa, Minnesota and Texas.

Texas, in particular, led the national windpower boom thanks to the Enron mandate. Think CEO Ken Lay and then Texas governor George W. Bush. (Governor Rick Perry would take over where Lay/Bush left off.)

When the Asian Financial crisis hit in 1997, oil prices collapsed taking with them any financial incentive to build new renewable generation. The PTC expired in 1999, the same year oil prices bottomed out, and new wind installations went bust the following year.

AWEA has complained for ten years that expiration of the PTC in 1999[2] caused development to slow calling it the boom-bust cycle. Yet given available data, it’s impossible to isolate the factors that contributed to the decline. Clearly other macroeconomic issues played a crucial role. Some energy experts maintain the PTC was largely irrelevant in those years.

After 2004, the PTC may have contributed to growth in the wind market, but so did State policies mandating renewables[3]. Wind benefited from rising natural gas prices as well (above $5 per MMBtu), making wind power contracts an attractive way to displace higher-cost gas generation.

By the middle of 2008, the U.S. economy stumbled and energy prices dropped off quickly. With incomes falling, tax-based policy incentives lost much of their effectiveness as tax equity investors disappeared.

Section 1603 cash grants created under the 2009 stimulus were designed to fill the void by granting project owners payouts equal to 30 percent of a project’s qualifying cost. Wind proponents and the Department of Energy advertised the grants as PTC-equivalents without the middle man, but nothing could be further from the truth.

Section 1603 is expected to expire this year and the wind industry has again turned its attention to extending the production tax credit (PTC). Ditlev Engel, chief executive officer of Vestas Wind Systems A/S complained that U.S. turbine sales may “fall off a cliff” unless lawmakers extend tax credits beyond 2012.

Sales may decline, Mr. Engel, but not because of the PTC.

The 2008 recession slowed economic growth causing demand for electricity to drop. Many States, including California, are now signaling their renewable mandates are being met which will weaken demand for wind. Recent discoveries of abundant shale gas reserves are expected to keep gas prices low and stable through to 2020 and likely longer.

Since natural gas is among the important elements in determining the competitiveness of wind, low gas prices will generally reduce wind’s attractiveness as a ‘fuel saver’. These are the market conditions Terra-Gen, NextERA, Iberdrola and others are facing. In fact, the Energy Information Administration is now forecasting flat growth in the wind sector for the next ten years regardless of what happens with the PTC.

For investors like General Electric, the credit is an open-ended subsidy offered for each kilowatt-hour of electricity produced. Because the PTC directly reduces the amount of federal income taxes paid, it should be thought of as providing 2.2¢/kWh of after-tax income (in 2011 dollars). This represents a pre-tax value of approximately 3.7¢/kWh (assumes a 40% marginal tax rate). When measured relative to the price of wholesale power, the PTC is exceptionally generous.

In New England, for example, where wholesale electricity prices are currently around 5.5¢/kWh, the subsidy equals nearly 75% percent of the power price. In areas where coal-fired power predominates, the subsidy on a pre-tax basis is approximately EQUAL to the wholesale price of electricity. Bear this in mind next time AWEA claims cost parity with non-renewable resources.

For consumers, the production tax credit disproportionately benefits ratepayers in States with renewable energy mandates by distributing the high cost of wind to taxpayers at large. And since the subsidy is uniform across the country it’s highly inefficient, supporting poorly sited projects as well as projects that would have been built regardless of the credit.

This is certainly true in Texas where wind exceeds transmission capacity and New England where utilities routinely sign long-term power contracts at prices significantly above market.

The production tax credit turns twenty years old next year. It’s time for Congress to act on the wishes of the House Ways and Means Committee and assess the effectiveness of the subsidy. AWEA’s myopic, superficial justification for extending the PTC is not supported by the facts. Rather, the credit serves little purpose today other than to line the pockets of project owners and tax-advantaged investors, distort the market by artificially masking the true cost of wind power, and encourage the development of poorly sited renewable projects that are far from load and deliver inimical to demand cycles.

[2]The PTC expired three times in the period between 1999 and 2003 and each time it was extended retroactively. At the same time, oil and gas prices were less stable before rising steadily after 2004.

[3] The Department of Energy reported in 2003that of the fifteen States with renewable programs on the books, 86 percent of new renewable energy capacity was a result of mandates, and the majority (93 percent) of the new capacity consisted of wind power installations.