If you haven’t heard from the American Wind Energy Association (AWEA), you probably will.

Ominous, scary ads are running nationwide warning of the crushing blow to American jobs if Congress fails to extend the Production Tax Credit (‘PTC’), the 20-year ‘temporary’ subsidy most credited for market growth in the wind sector. The PTC is due to expire at the end of this year.

Most of the ads target particular House members who, so far, have resisted the industry’s demands for their PTC earmark. The pressure is particularly heated right now as Congress negotiates the payroll tax holiday bill, which is viewed by many as the last best chance to attach an extension of the PTC before November’s presidential election.

AWEA is also leaning on its friends to do its bidding. Politicos from wind-friendly states like Iowa, and Kansas have written letters to members of the Congressional conference committee that’s now hashing out the tax bill. The letters repeat the same tired talking points about jobs.

It’s embarrassing to see these politicians blindly repeat what they’ve been told with no apparent understanding of the costs and impacts of pro-wind policies. Government (taxpayers) do not create jobs on net. Resources taken from the private sector reduced demand and thus (unseen) jobs to create the seen (wind) jobs.

But higher energy costs and misallocated resources in the process make us all poorer. Henry Hazlitt refuted ‘green jobs’ decades before the term was invented in Economics in One Lesson via his explanation of seen-versus-unseen jobs.

Do you think Senator Harkin or Governor Brownback realize that since the PTC was adopted in 1992, its annual cost has ballooned from $5 million a year in 1998 to over $1 billion annually today. Or that this open-ended subsidy of 2.2¢/kWh in after-tax income represents a pre-tax value of approximately 3.7¢/kWh? In many regions of the country the PTC equals, or exceeds the wholesale price of power! 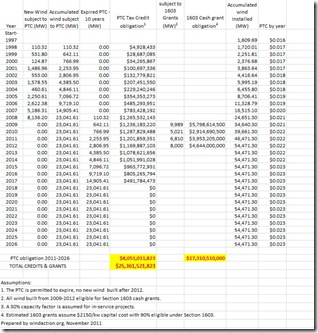 Like AWEA’s ads, our windy politicos complain about the loss of jobs if big wind is not coddled further by the government. How would they respond if told that despite the billions in public funding since 2008, the wind sector lost 10,000 direct and indirect jobs, bringing the total to 75,000 jobs? [1]

Or that States like Vermont have found that “above-market energy costs tied to renewables have the deleterious effects of reshuffling consumer spending and increasing the cost of production for Vermont businesses.” These increased costs reduce any positive employment impacts of renewable energy capital investment.

It takes only 0.1 jobs per megawatt to operate a wind plant. Most of the sector’s jobs are temporary construction positions with less than 20,000 involved in the manufacture of industrial parts that could be used in turbines.

If we accept that earmarks for the wind industry are still appropriate, the PTC is highly inefficient and should, at least, be updated to respond to current market conditions. For example, since it is uniform across the country the PTC supports poorly sited wind development in some areas while in other areas pays for projects that would have been built regardless of the credit.

The policy also ignores other crucial factors driving wind development in the U.S. including State mandates and energy prices. With more than half the states mandating renewable development, some policy experts question why projects receive benefits from both State renewable portfolio policies and the PTC. Good question.

Finding politicians to mouth support for big wind is not hard. But the American public is not as easily manipulated. In a letter this week to the Las Vegas Review Journal, one reader responded to AWEA’s call to action by contacting Representative Joe Heck and asking him to “kill all the tax breaks and subsidies for wind, solar, and ethanol energy,” adding that “if they cannot stand alone without government help, they will have to reinvent their technology or go out of business.”

This weekend, a letter signed by over 200 ranchers and residents was sent to the Nevadan congressional delegation, asking them to vote NO on any further extensions of the PTC. Similar letters were sent from states across the U.S. representing two-thousand signers.

When Enron (the parent of Enron Wind Corp.) declared bankruptcy in 2001, the government said no to a bailout, and 4,000 workers were laid off in Houston, Texas, and elsewhere around the world. But on that day forward, economies became more efficient with skilled employees leaving failure to gain viable consumer-driven employment. Today, mirage “green” jobs can go to real jobs in the booming real energy industry.

The PTC is one earmark many Americans know about, and their opinion of it is remarkably consistent: The cost of the PTC is excessive, the benefits elusive and, frankly, big wind’s pitiful performance measured against industry promises makes this entitlement an easy one to sunset.

[1] Lawrence Berkeley National Laboratory reports (p. 7): “The American Wind Energy Association, meanwhile, estimates that the entire wind energy sector directly and indirectly employed 75,000 full-time workers in the United States at the end of 2010 – about 10,000 fewer full-time-equivalent jobs than in 2009, mostly due to the decrease in new wind power plant construction.” A recent AWEA blog (February 3, 2012) confirms the 75,000 is still current.