Seasteading and Stewardship: An Introduction to a New Frontier

[Editor note: The growing importance of offshore mineral development (including oil and gas) makes property rights and the rule of law important for 21st century development.

In this post, Mr. Borders introduces us to this new frontier of human ingenuity. Cities of the sea will be way stations for a variety of commercial activities, including ultra-deep mineral development in future decades and centuries. ]

“History teaches us that we see incredible gains for civilization whenever a new frontier is developed. Seasteads represent a freedom frontier unique in the world: offering a chance to provide social, economic and political freedom to its citizens. Humanity will benefit from more places open to liberty, opportunity, free markets and innovation in everything.”

When I tell people I’ve been working part-time as a scholar with the Seasteading Institute (see description below), I usually encounter polite skepticism. Fair enough. New things are often greeted with skepticism. But I’d like to offer some reasons to be lessskeptical of seasteading. In particular, this movement/enterprise could go toward solving some of the most pressing resource and environmental problems of our time.

Imagine a city on the sea. This city could very well be a cluster of floating platforms like the platform pictured below. Given the modularity and mobility of these future platforms, each will likely position itself as a beneficial unit within a commercial ecosystem. 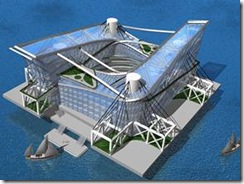 Like benevolentfungi, seasteads are likely to accrete where their presence is most highly valued. These clusters might crop up near resource-rich areas. Or they might emerge near urban centers. Wherever they arise, seastead clusters will likely be the next frontier of human expansion. At the Seasteading Institute, we are most excited about the new legal rulesets that will emerge as people live, love, barter and cooperate.

Readers of this site will be familiar with the Tragedy of the Commons. So-called “commons problems” are abundant at sea. In the absence of institutions (good rules), economic actors tend to over-exploit. Such is true for many fisheries around the world. Seabed resources will continue to be stripped by those who act on the cold logic: if we don’t, our neighbors will.

When it comes to energy, this perverse race-to-grab at sea has been driven not just by energy exploration moratoria on land, but by a lack of institutions at sea. Such has resulted in some interesting Westphalianbehavioramongnation–states, too. But let us not digress. The question is: can these causes and consequences be avoided?

More to the point: how do you stop the Tragedy of the Commons at sea? In our paper “ChartingtheCourse: TowardaSeasteadingLegalStrategy” Dario Mutabdzija (The Seasteading Institute’s resident legal strategist) and I outline two competing theories. Basically we argue it’s Elinor Ostrom versus the world.

Okay, so “the world” is a bit of a stretch. Multilateral institutions like the UN are not the world. But they certainly embrace a top-down view of managing the commons. Still, to be fair, almost every nation on earth is signatory to the agreementin which the top-down view is embedded.

In theory, the top-down view of resource management is justified by an international legal doctrine known as the Common Heritage of Mankind — now part of the UNCLOS, or Law of the Sea. (Note: the U.S. has yet to sign on to this part of the agreement.) The Common Heritage doctrine says more or less that common-pool resources should remain so and be protected against over-harvesting. The idea is that “we” must ensure there are resources for future generations, a “common heritage.” The doctrine thus calls for the establishment of a central resource authority charged with making critical decisions about the use of these resources.

In practice, this form of resource management has a checkered history. Resource-rich places like Nigeria, Saudi Arabia and the former Soviet Russia have had top-down management regimes. In these areas, the record of top-down management is mixed at best. These authorities have often been unable to deal effectively with tragedies of the commons. Black markets become the norm. Political allocation of a resource means varying degrees of corruption, as interest groups must collude with the authority in order to harvest the resource.

In other words, multilateral codification of the Common Heritage doctrine would likely create a situation in which a) a weak central authority would be unable to enforce the doctrine and tragedies of the commons would continue, or b) a strong central authority would remain strong only by succumbing to capture by powerful corporate and national interests. While we might like to imagine that such an authority would be staffed with angels in green jackets, history tells a very different story of centralized resource management.

So why have countries been so quick to sign onto the Common Heritage doctrine? Malthusian fears of overuse? Wilsonian fears of conflict? I cannot say. But if the U.S. signs on, “the world” may have succeeded institutionalizing commons problems, corruption or both.

But is there another way? Professor Ostrom (and afew others) suggest that the most effective ways to manage common-pool resources are almost always either local or private. Local control instills an incentive to conserve. At sea, however, defining or delineating mine-and-thine can be difficult. Currents move. Fish swim. And terra firma can be 20,000 leagues under. But people with a long-term interest in stopping commons problems usually get together and figure out solutions — usually ones that involve some sort of quasi-property rights. Transferablefishingquotasare a good example.

We like the Old West examples, too. It’s that homesteading spirit from which seasteaders borrow:

The settling of the American West is instructive. While no one had then fully articulated the tragedy of the commons, people were already devising quasi-legal institutions both to deal with commons problems and to ensure the stability of future returns for investments in labor. We say ‘quasi-legal’ because some of these systems were informal rules at first, but western settlers contrived and observed them nevertheless. Many came later to be codified.

We think a similar body of law is likely to evolve on the sea. And notice we prefer “evolve” to “design”:

Indeed, the settling of the American West reflects much of the kind of bottom-up law that characterizes the Anglospheric legal tradition. In this tradition, there is strong deference to the patterns of rules that emerge through human interaction. This has come to be known as “emergent law.” Modern U.S. property law thus originated in the standards and practices of real settlers eager to head off conflicts.

What better way to discover what works than to let people solve problems through trial and error? People usually prefer peace to war and cooperation to coercion. So the peopling of the sea — as with the settling of the West — is likely to give rise to newer, better social operating systems. That is one of our core beliefs. May the superior systems win.

Of course, there are those who believe the American West’s settling is an example of humanity’s expansion at the expense of the environment and natural resources. There is not much one can say to those who regard humanity as a cancer. Otherwise, we hope more fair-minded folks will acknowledge that matters are worse in the absence of emergent norms and institutions. Such vacuums are usually filled by poachers and predatory regimes.

We also hope optimists will see that, on most dimensions, the environment is now cleaner than it has been in a century–that is, in places where local ownership institutions are the rule. If we take human expansion as given, the only question that remains is how to manage resources — centrally, locally or not at all. 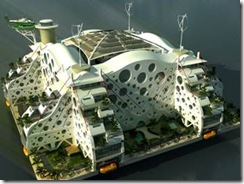 Seasteading as a Solution

In the interests of finding a pragmatic, stewardship solution to the tragedy of the ocean commons, we’d like to offer a few points:

1. Seasteading is about people living and working on the sea. After a while these people will develop their own institutions — formal and informal. If seasteading is not thwarted by strong national actors, seasteading’s ‘Ostrom moment’ will arrive.

2. Among these formal and informal institutions will be good rules for solving resource and environmental problems.

3. Seasteaders could act as a neutral party among nation-states vying for ocean resources. This is not to suggest seasteaders would position themselves as an authority. It is rather to suggest that emergent seasteading law can eventually be taken up as emergent, useful and established law, and then incorporated into other bodies of law to which all kinds of economic actors could refer.

4. Out of this law, property- and quasi-property rights solutions are far likelier to come into the world — not from Kantian visions, but from the tests of time and real-world users.

One can easily imagine partnerships between energy concerns and seasteaders. Indeed, given the presenceofmanyofthoseconcernsalreadyonthesea, we can even imagine they will be among the first seasteaders.

Seasteading has great potential as a catalyst for positive social change. It is the new frontier and a means of conserving resources, while sharing in the ocean’s bounty.

Still skeptical? For more detail on these ideas, I refer you again to “ChartingtheCourse.” (In our next legal research paper, Dario Mutabdzija and I will deal with specific strategies for starting seasteading businesses.) For more thoughts on seasteading policy and law, findmoreat the Seasteading Institute website.

At The Seasteading Institute (founded 2008), we believe that experiments are the source of all progress: to find something better, you have to try something new.

But right now, there is no open space for experimenting with new societies.  That’s why we work to enable seasteading communities — floating cities — which will allow the next generation of pioneers to peacefully test new ideas for government.  The most successful can then inspire change in governments around the world.

We’re opening this new frontier because humanity needs better ways to live together to unlock our full potential.

Why The World Needs Seasteading

The vision of seasteading is an urgent one. We can already see that existing political systems are straining to cope with the realities of the 21st century. We need to create the next generation of governance: banking systems to better handle the inevitable financial crises, medical regulations that protect people without retarding innovation, and democracies that ensure our representatives truly represent us.

Seasteaders believe that government shouldn’t be like the cell phone carrier industry, with few choices and high customer-lock-in. Instead, we envision a vibrant startup sector for government, with many small groups experimenting with innovative ideas as they compete to serve their citizens’ needs better.

Currently, it is very difficult to experiment with alternative social systems on a small scale; countries are so enormous that it is hard for an individual to make much difference. The world needs a place where those who wish to experiment with building new societies can go to test out their ideas. All land is already claimed — which makes the oceans humanity’s next frontier.

Fortunately, we are bringing this vision closer to reality every day. Read answers to the top 10 questions about seasteading, or learn about our strategy.

One Comment for “Seasteading and Stewardship: An Introduction to a New Frontier”