Energy Subsidies vs. Energy Sense: What Have We Learned in the Past 3 Years?

The U.S. Department of Energy publishes periodic reports (see the latest) on federal government subsidies to energy production in the U.S.  These reports total up the costs of direct financial support for various energy technologies, tax incentives, research related to marketing and implementation and price support.

Tax Expenditures – $16.3 billion. Provisions in the federal tax code that reduce the tax liability of firms or individuals who take specified actions that affect energy production, consumption, or conservation.

Research and Development (R&D) – $4.4 billion. Federal expenditures aimed at a variety of goals, such as increasing U.S. energy supplies or improving the efficiency of various energy consumption, production, transformation, and end-use technologies.

Electricity programs serving targeted categories of electricity consumers in several geographic regions of the country – $0.6 billion. Theses are primarily activities of the Tennessee Valley Authority (TVA) and the Power Marketing Administrations (PMAs), which include the Bonneville Power Administration (BPA) and three smaller PMAs.

Of this total of over $37 billion, about $21 billion went to energy production, the remaining $16 billion was spent on electricity transmission & distribution, conservation and efficiency and automobile programs.  This paper focuses on federal subsidies to energy production.

To listen to the current administration, and its renewable energy cheerleaders, one would think that the oil and gas industries were basking in federal largesse, unable to operate even minimally without the kind hand of the federal government.  Renewable sources of energy, on the other hand, are starved of resources, and, therefore, unable to complete with the “subsidized” conventional energy sources.

The facts do not support this view.  Fully two thirds of federal production-related expenditures in FY 2010 went to non-hydro renewables – biomass, wind, solar, and geothermal.

Most of the federal money went to direct expenditures ($4.7 billion) and tax “expenditures” ($11.2 billion) – 61% of total production-related expenditures.  In the dreaded tax “expenditure” category, that sink of favoritism and corruption purportedly benefiting only the oil and gas plutocrats, the largest recipient of federal favors was (drum roll, please) biomass (ethanol and “biofuels”), with 56% of total “expenditures” ($6.8 billion).  Throw in another $1.4 billion for wind and solar and the share of renewables comes to just over 66%, roughly two thirds of the total.  Oil, gas and coal together took just over 26% of these tax “expenditures.”

Direct expenditures, monies that the federal government pays to producers, are tilted even more heavily toward renewables.  Oil, gas and coal take less than 1% of production-related direct expenditures of $4.7 billion.  Wind was responsible for fully 76% of direct expenditures ($3.56 billion), and solar got another $496 million, or 10.6% of this category.

Federal government subsidies for energy production in FY 2010, at about $37 billion, were roughly twice as high as in FY 2007, and about four times the FY 1999 level.  Added to the overall increase in subsidies is the reduced productivity of such expenditures.  In 2007 each million BTU of wind energy converted to electricity cost the taxpayers $6.85 ($23.37/MWh).  By FY 2010 subsidies for wind had increased so much that the federal outlay per million BTU of output had risen to $15.44 ($53/MWh).  For solar the trends are even more alarming (unless you are a solar energy company).  In 2007 each million BTU of energy from solar cost taxpayers about $7.13.  By 2010 the taxpayers were supporting solar energy to the tune of $274 per million BTU (Solyndra, anyone?).  As a baseline the market price for natural gas at the Henry Hub hovers around $4/million BTU while crude oil costs about $15/million BTU from OPEC and domestic sources.

Subsidies for Energy Production in FY 2010

As the table indicates, the unit subsidies for oil, gas and coal are negligible relative to production, less than 10¢ per million BTU.  Even nuclear is hardly subsidized compared to renewables.  For non-hydro renewables in general subsidies cost the public almost $3 for every million BTU produced.  Comparing expenditures and production by energy source the 2010 figures look like this: 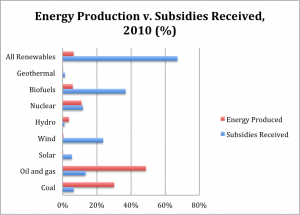 As shares of total energy output or subsidy expenditure the figure shows that most of the money goes to relatively insignificant energy producers and most of the energy production comes from unsubsidized sources.  Hmmm, is there a message is there somewhere?

Now for the Good News

Some forms of energy received less money from the federal government in 2011 than they did in 2007.  Support for coal use and transformation dropped by more than 60%, from $3.3 billion to $1.36 billion.  Support for oil and gas has hardly risen in real terms since 1999.

Nuclear energy-related expenditures have increased by only $1 billion since FY 2007.

Where Does the Money Go?

According to a recent article in the New York Times, many of the recipients of federal renewable energy subsidies can be found among the largest banks, investment houses and industrial companies in the country.  As the article notes, “When the Obama administration and Congress expanded the clean-energy incentives in 2009, a gold-rush mentality took over.”

A great deal of attention has been focused on Solyndra, a start-up that received $528 million in federal loans to develop cutting-edge solar technology before it went bankrupt, but nearly 90 percent of the $16 billion in clean-energy loans guaranteed by the federal government since 2009 went to subsidize these lower-risk power plants, which in many cases were backed by big companies with vast resources.”

In words reminiscent of Citicorp’s Charles “when the music is playing you gotta get up and dance” Prince, Excelon’s CEO, David W. Crane, told Wall Street analysts early this year the government’s largess was a once-in-a-generation opportunity.  Government loan guarantees secured $5.2 billion for four large solar projects by Excelon.  State government mandated purchase agreements anchored the income side of the transaction as well.

“I have never seen anything that I have had to do in my 20 years in the power industry that involved less risk than these projects,” he said in a recent interview. “It is just filling the desert with panels.”

Political Capitalism Does Not Produce Useful Energy For The US Economy

Aside from higher deficits it is hard to see what all this spending has produced for the US.

Is this the road to robust energy supply and increasing independence?  As the man in Maine said, “if I wanted to go there I wouldn’t  start from here.”