“EPA should not be allowed to fund illegal experiments, hire surrogates to scare and propagandize us, or impose excessive, fraudulent rules that kill jobs and harm human health and welfare. Nor should it have so much fat in its budget that it can waste our money on useless, unethical programs.”

The U.S. Environmental Protection Agency’s neo-Malthusian-inspired ecological battle against the economy centers upon mitigating emissions of the green greenhouse gas: carbon dioxide (CO2). But there is another part to the story: EPA’s rushed, hyper-restrictive standards for ozone.

Under the Clean Air Act, EPA must set standards for ozone and other pollutants – and periodically review existing standards, to determine whether they are adequately protecting public health, or need to be tightened further.

However, due to public outcry, and because EPA’s own clean air science advisory committee said the reduction wasn’t necessary, in 2009 the agency suspended the 75 ppb rule’s implementation, pending “further study.”

Shortly thereafter, though, Lisa Jackson’s EPA decided to slash allowable ozone levels to 60 ppb – without doing any further analysis. Sensing how politically volatile the issue could become, President Obama told EPA to postpone the hyper-restrictive rule until after the 2012 elections.

Right now, according to the Business Roundtable, only 66 out of 736 monitored US counties do not meet the 75 ppb ozone standard. (Virtually all counties meet the 84 ppb standard.) The Obama EPA’s 60 ppb rule would put 96% of those counties – 707 of 736 – out of compliance, according to EPA!

Other analysts say the new standard would turn “only” 85-88% of the counties into non-attainment areas. Maps depicting the 60 ppb rule’s impact show massive swaths of the United States blasted into noncompliance. 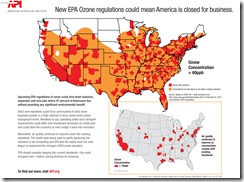 The 60 ppb standard is not anchored to transparent, objective science about the effects of ozone on humans. In fact, no recent study has shown negative (much less toxic) effects on people, even at levels far higher than in America’s ambient air.

Ozone is a naturally occurring oxygen compound (O3) found in varying concentrations in all air all over the world. Even people engaged in vigorous exercise displayed only minor transient effects from high ozone levels.

This overreach is underscored by the fact that even parts of Yellowstone Park would be out of compliance, if the 60 ppb rule is imposed. That’s because the volatile organic compounds that are precursors to ozone don’t come just from fuels, plastics and other hydrocarbons. They also come from volcanoes, hot springs and trees: deciduous trees emit VOCs on hot, sunny days; conifers emit them day and night.

The regulatory derangement is further accentuated by its outsized cost. EPA itself says the 60 ppb rule will carry a $52–90 billion annual price tag. But the Manufacturers Alliance for Productivity and Innovation says the actual cost could be $1 trillion per year.

Even worse, that is on top of the current cost of $353 billion per year to comply just with EPA rules – and the $1.8 trillion annual cost for U.S. businesses and families to comply with all federal regulations – according to the Competitive Enterprise Institute.

Its claims that economy-crushing ozone rules will prevent asthma and “save the children” are equally deceitful. U.S. asthma rates have been rising, even as pollution levels are declining. By EPA’s “logic,” we should increase pollution to decrease asthma rates.

In reality, asthma is an allergic disease; air pollution can aggravate asthma to some degree, but doesn’t cause it. Hospital data show no correlation between pollution levels and asthma admissions.

The real reasons more kids have asthma attacks, toxicologists explain, is that they spend more time in tightly insulated homes, spend less time outdoors and in the dirt, and don’t get exposed to enough allergens during their early years to reduce their high levels of immune hyperactivity and allergic hypersensitivity.

In essence, American children are living “in a bubble” and are too sensitive to exposures to allergens that would not have caused allergic reactions to previous generations.

An honest, socially responsible EPA or American Lung Association (ALA) would clarify all this. But EPA has an agenda – and it pays the ALA–and other activist groups–millions of dollars annually to help it frighten people about “worsening” air quality and “dangerous” pollution levels, to advance that agenda.

The Heritage Foundation estimates that EPA gave these organizations $3.8 billion between 2000 and 2010. The American Lung Association alone received over $20 million – which it used to:

EPA has also given millions in taxpayer money to student activist groups and “environmental justice” organizations, to vilify and stifle any criticism of its programs, assertions, methodologies, or damage to people’s health and welfare.

In one particularly outrageous example, EPA gave millions of dollars to researchers who intentionally and illegally exposed thousands of people to air pollutants, including soot from diesel exhaust – at high levels that EPA itself insists (but did not tell its experimental subjects) are dangerous and even deadly.

EPA is using the studies to bolster its bogus claim that we need even stricter limits for these pollutants. Almost as incredible, although even these supposedly “lethal” pollution levels did not sicken test subjects, the agency still demands emission levels at a tiny percentage of what the test subjects were exposed to.

Either EPA and its equally unethical researchers are guilty of attempted manslaughter for exposing people to lethal doses – or they are lying to Congress and the American people about the effects of air pollution, to justify imposing more job-killing rules that have no medical or scientific basis.

In fact, EPA claims that 65% of the alleged “benefits” from its 60 ppb ozone rules will come from “incidental reductions” in the “fine particulate matter” (soot) that its test subjects were illegally exposed to. In other words, EPA itself admits that ozone is not actually a problem.

This secretive, tyrannical, corrupt, abusive, ideologically driven rogue agency’s budget needs to be trimmed, as several courageous congressmen have proposed. That would help force EPA to focus on real environmental problems, as required by law and honest science.

EPA overreach is costly. Anemic growth and declining economic status mean millions of families cannot heat and cool their homes properly, pay their rent, mortgage or other bills, take vacations, or save for retirement.

EPA should not be allowed to fund illegal experiments, hire surrogates to scare and propagandize us, or impose excessive, fraudulent rules that kill jobs and harm human health and welfare. Nor should it have so much fat in its budget that it can waste our money on useless, unethical programs.

An essential part of this long-overdue reformation will be to investigate EPA and its researchers for their immoral human experiments, the endless deceptions being perpetrated on our nation, and the serious harm that this agency’s unnecessary, oppressive regulations are having on people’s jobs, health and welfare.

Its imminent CO2/global warming regime will put EPA in charge of everything Americans make, ship, drive, eat and do.

The EPA NoZone means no economic growth, no employment opportunities, no civil rights progress, no concern about our lives, livelihoods, or real health and welfare. These ozone rules will not be issued in a vacuum.

More than 40 million Americans are still unemployed, under-employed, or have given up on finding a job. Over 47 million are on food stamps. Then there’s Obamacare, Dodd-Frank … and federal agencies primed to impose 4,000 more new regulations – on top of the 81,883 rules they have issued over the past two decades! EPA’s ozone rules would perpetuate this disaster and our abysmal 1.8% economic growth.

In Closed for Business?, the American Petroleum Institute warns:

Upcoming EPA regulations of ozone could shut down business expansion and new jobs where 97 percent of Americans live, without providing any significant environmental benefit.
Strict new standards could force communities to shut down business activity in a futile attempt to force ozone levels below background levels. Needless to say, operating under such stringent requirements could stifle new investment necessary to create jobs and could slow the economy or even nudge it back into recession.

EPA’s Twilight Zone is bizarre, on top of bad. America’s air quality has improved dramatically since 1970, and continues to get even better as technologies and fuel efficiencies advance. But instead of recognizing this, EPA (and the pressure groups it pays to promote scary pollution fantasies) constantly demand more costly and restrictive regulations.

The rules do not just provide few or no actual benefits; by imposing needless costs and killing jobs, they actually harm human health and welfare, and kill people.