“Offshore wind is essentially a government-made market that would not exist in the U.S. but for a massive intervention from Washington and an ‘at-any-cost’ mentality at the state level. Of the alleged 15,650 MW of offshore wind in DOE’s pipeline, a very small fraction represents projects proffered by private entities.”

But don’t count on it. The already uneconomic on land is only worse off in the waters.

Washington’s support for wind power is ideological, steeped in wishful thinking about what could be built, both on- and off- shore. Since 2008, DOE has pumped out reports propagandizing the benefits and feasibility of wind while regularly downplaying its costs. First came the roadmap for reaching 20% Wind Power by 2030, which meant constructing 305,000 MW of wind by 2030, including 54,000 MW offshore.

To its credit, the report offers a valuable summary of the offshore wind market but the details were lost in the media blitz that followed. The web was flooded with stories announcing the 21 project, 15,650 megawatt pipeline leading readers to believe we’re on the verge of something big. The numbers were unexpected, impressive …and not real. 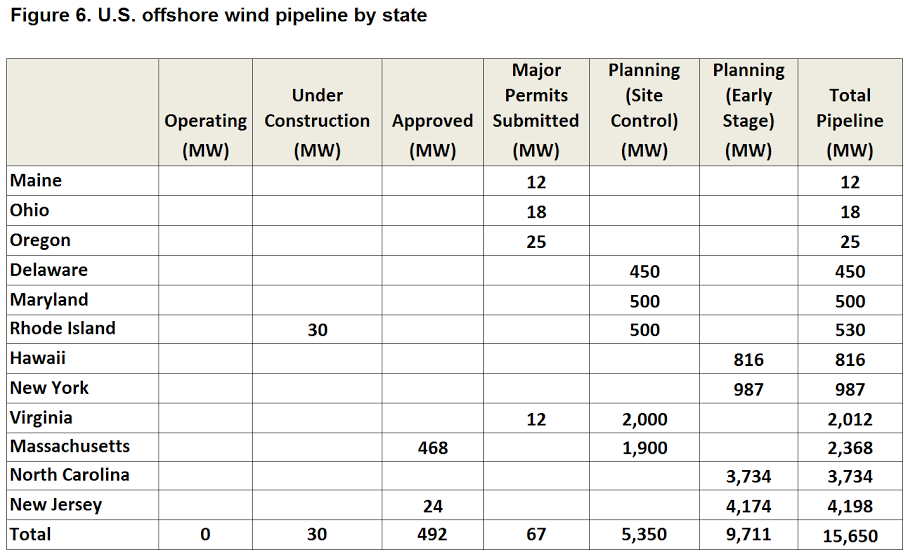 DOE’s list of ‘active’ projects includes Cape Wind, the stalled 468 MW project proposed for federal waters off the coast of Massachusetts. Cape Wind lost its lucrative power contracts after failing to secure financing last year. The project is now widely believed to be dead despite recent optimism among company representatives.

Also included are NRG’s Bluewater Wind, a 450 MW project off Delaware’s coast, on hold since 2012 and Dominion’s 12 MW pilot in Virginia waters that was yanked after construction bids came in at a whopping $33,000 per KW.  Other stalled projects in DOE’s pipeline include Fishermen’s Energy’s  24 MW off Atlantic City, WindFloat Pacific’s  25 MW off Oregon’s coast, and Maine Aqua Ventus’ 12 MW project in Maine. The Dominion, Fishermen’s and WindFloat projects have already received federal grants for nearly $150 million to jumpstart their development.

And then there are the non-projects. DOE padded its pipeline with over 5,000 MW that don’t even exist as projects yet. Instead, the agency looked at offshore leases awarded by the Bureau of Ocean Energy Management (BOEM), estimated the capacity that could fit within the limits of the lease and cited these as ‘projects’ with site control.

Companies awarded the leases also indicated the capacities they might build. The remaining 10,000 MW consists of ‘early stage’ projects, i.e. those where the BOEM is still evaluating whether a competitive interest exists to warrant a lease. States included in this category are Hawaii, New York, New Jersey and North Carolina. DOE’s pipeline is not a pipeline at all – it’s a pipedream.

No doubt, Washington’s enthusiasm for offshore wind was goosed this spring when Block Island Wind commenced construction. The 30 MW pilot project off Rhode Island’s coast is expected to be operational by fall 2016. DOE touts the development  as “leveraging 25 years of European technical knowledge, as well as U.S. manufacturing and installation expertise.” Nice words, but meaningless. The project has been plagued by accidents , rough waters, safety complaints  and faulty workmanship . The turbines are another concern. At the time the five Alstom Haliade 150-6 MW  machines were contracted in 2014, only two prototypes  had been installed worldwide – one in France and the other in Belgium. Alstom has no operating turbines in the U.S., no development experience in U.S. eastern waters, and the company wasn’t even recognized in DOE’s report as a supplier.

While safety and engineering problems may be addressed, the economics are another story. Like Cape Wind in Massachusetts, significant government arm-twisting was used to force Block Island Wind’s high costs on Rhode Island ratepayers. The 20-year power purchase agreement (PPA) with National Grid starts at 24.4 ¢ per kWh with an annual escalator of 3.5%. This is compared to average wholesale electricity prices in New England of roughly 4.4 ¢ per kWh.

When the PPA was first presented to the Rhode Island PUC in 2009, the Commission rightfully concluded it was “not commercially reasonable” and voted no. But politics prevailed. The General Assembly enacted a new standard of “commercial reasonableness” applicable only to the Block Island PPA. The PUC was forced to reverse itself. This small project will cost every Rhode Island ratepayer approximately $1,000 over the 20-year life of the contract, not counting the underwater cable from Block Island to the mainland, estimated at $110‐120 million. Industrial users will pay more.

Active litigation is pending over the PPA. Block Island Wind remains a high-risk costly effort that could break, not make, the U.S. offshore wind market.

Offshore wind is essentially a government-made market that would not exist in the U.S. but for a massive intervention from Washington and an ‘at-any-cost’ mentality at the state level. Of the alleged 15,650 MW of offshore wind in DOE’s pipeline, a very small fraction represents projects proffered by private entities.

And even that’s a stretch given the political arm-twisting and litigation required to move the projects past the idea stage. The price tag remains beyond what the free market will bear on its own—and in most cases beyond what individual states can justify imposing on their residents. But for ideologues, price is not an issue.

The rest of us are expected to cooperate by looking past the poor economics. Such cooperation is short-lived and will not change the fact that offshore wind is hardly worth the effort.

So why waste money in this sector when lower-cost, more realistic options exist for reducing our carbon emission? The obvious answer is that we should not. But don’t expect a reasoned response from this Washington.