“The bulk of AWEA’s presentation was designed to show how many and diverse are the offshore wind projects under way. Other than Deepwater Wind and the likely dead Cape Wind projects, all the other projects or possible projects are living on government grants and/or remain little more than speculative research projects. [AWEA head Tom] Kiernan acknowledged that the problem for offshore wind is its cost, likely three to five times that of onshore wind projects.

As one would expect, Mr. Kiernan presented all the positives for wind energy – its cost has declined to where it is now competitive with coal and natural gas generated electricity, there are no emissions since there is no fuel burned to generate electricity. And the cost of wind power can be fixed for 20 years.

These benefits are well known, but the history of wind power is tied very closely to federal tax policy, something not prominently mentioned.

Listed on the AWEA’s web site is a discussion about why Americans of all political persuasions should be clamoring for more wind power, which highlighted the positive qualities cited above. The AWEA also lists it top priority for keeping the industry humming as insuring stable and predictable tax credits.

AWEA also says that a national standard for renewable electricity and transmission policies to improve the nation’s power grid, as well as “prudent siting policies,” are key to this electricity source’s growth.

The reality is, and the AWEA acknowledges, that federal tax policy has been the predominant driver of wind energy development over the last decade.

There are two forms of tax incentives for developers of wind farms – the Production Tax Credit (PTC) and the Investment Tax Credit (ITC).  The primary tax incentive has been the PTC, which provides a credit worth 2.3 cents for every kilowatt-hour (kWh) of electricity generated for the power grid for the first ten years of operation of a wind turbine.  The ITC, which is similar to the tax incentive offered to regular businesses for capital investment in their enterprises, is also offered to wind farm developers in the amount of 30%.  Wind farm developers can select only one of these two tax policy alternatives.

The history of the PTC has been volatile, with the credit usually being a temporary incentive that has been allowed to die during tax legislation battles in Washington, only to be resurrected later.  Since most wind farms opt for the PTC, its impact on the investment decisions of wind project developers has produced periods of high investment followed by non-existent investment.

That pattern can be observed in Exhibit 1, where both annual additions for wind generation capacity along with the cumulative trend for 1999-2015 is shown.  An examination (sorry but the chart is tough to view) shows almost no wind generation capacity added in 2000, 2002 and 2004 as the annual PTC expired for those years.  In more recent times, the PTC had a multiple-year life.  Whenever it appeared that the PTC might end, however, there was a falloff in new capacity additions such as seen in 2010 and again in 2013.

It is the uncertainty about federal tax incentives that causes the AWEA to target a stable and predictable tax policy for wind projects. The PTC and ITC for renewable fuel power projects expired at the end of 2014. In the 2014 extension, language was added to allow projects that commenced construction before the end of 2014 to still receive the tax credit. That language led to extensive discussion over what represented “commenced construction” in order to be eligible for the credit. The energy legislation that was enacted at the end of 2015 included a five-year retroactive extension of the previous bill but steps down the value of the tax credits through December 31, 2019.

While the AWEA was happy to have an extended tax credit life, it was hoping that the credits would not be reduced. The push to cut the tax credits in the latter years was an effort to force renewable power to become economically sustainable without tax subsidies. But as Mr. Kiernan was quoted saying at the time the 2015 legislation was passed, “The later years of this agreement will provide some challenges that the wind industry will work to overcome with our employees, partners and champions.”

While the discussion about onshore wind energy was interesting, we continued to be puzzled by Mr. Kiernan’s repeating the claim about 20-year fixed cost for wind power. The argument he was making was that since there was no fuel cost associated with wind, its cost wouldn’t increase. We are not sure that is true of the various power purchase agreements (PPA) signed between onshore wind project developers and utility buyers.

When Ms. Wanner presented the state of the offshore wind business, there was no mention of 20-year fixed costs. There have been four offshore wind PPAs signed – two associated with the Deepwater Wind project off Block Island, Rhode Island, and two associated with the Cape Wind project in Nantucket Bay off Cape Cod and Martha’s Vineyard, Massachusetts.

The Cape Wind project remains on life-support as its cost has soared to an estimated $2.5 billion, well above initial estimates, and residents continue to battle over the issuance of permits for the project.  As a result, the two utility PPAs have been cancelled.

All four offshore wind PPAs were priced initially well above current power costs for residents in the respective states and they all carried 3.5% annual guaranteed price escalations, a point almost never acknowledged in the media accounts of these projects.

Because the wind farm will produce more power than island residents will use, the surplus will be transmitted to shore over a $107 million underwater power line. When the wind doesn’t blow, island residents will be able to get their power from shore over the same cable. Onshore retail power costs in Rhode Island are around 16.5 cents per kWh, however the actual fuel charge is only 8.8 cents per kWh due to low natural gas prices. Once Deepwater Wind is generating power this fall, the utility bills of onshore residents will rise as the high-cost wind power at three times the current fuel cost is averaged into the state’s fuel mix.

An analysis of the choice of PTC or ITC for offshore wind projects prepared by Constance McDaniel Wyman, a graduate student at the University of Texas at Austin, for online magazine North American WindPower last year shows why the ITC choice was critical.

The analysis was designed to generate a net present value (NPV) for the two projects utilizing five variables: capacity factors; average mean wind speed; electricity price; capital cost; and operating and maintenance expenses. The assumptions are listed in Exhibit 2.  A third project was also analyzed with variable factors falling midway between the Mean and High Values.

We would point out that the capacity utilization figures of 30% to 40% are seldom mentioned when the low cost of wind power is touted, which means other power sources need to be maintained that increase the overall cost for consumers. 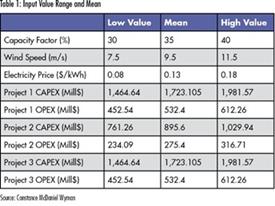 The researcher modeled each project 1,000 times in order to develop the results shown in Exhibit 2. The results show the percentage of the models that produced positive results. It also shows for cases involving no tax credit, the PTC and the ITC, the average NPV, the Minimum NPV and the Maximum NPV.

The bulk of Ms. Wanner’s NOIA presentation was designed to show how many and diverse are the offshore wind projects under way. Other than Deepwater Wind and the likely dead Cape Wind projects, all the other projects or possible projects are living on government grants and/or remain little more than speculative research projects. Mr. Kiernan acknowledged that the problem for offshore wind is its cost, likely three to five times that of onshore wind projects. 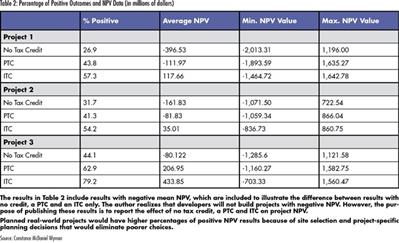 The cost issue is further challenged by the fact that most of the U.S. coastline borders on water too deep to install fixed foundations necessitating floating wind turbines that will prove not only very expensive but potentially less efficient, too.

For anyone interested in more about the history of how Deepwater Wind came into existence, the strong-armed legal battles in Rhode Island, and the financial windfall for its developer, D. E. Shaw, we suggest reading an article about the wind farm in the May 10, 2016, issue of Forbes magazine, “Is America’s First Offshore Wind Farm a Real Revolution or Just Another Green Boondoggle?” You will gain a greater appreciation of the real winners of expensive renewable energy projects.