“TOC’s plan … is not manual plastic removal, which allows most creatures to escape. It will instead use purse seines with a minimum mesh size of ⅛ inch (3 mm), capable of trapping microplastics—but also an untold number and variety of sea creatures.”

On a recent boating adventure in the open Pacific, my friends and I came across a section of abandoned fishing net. My first thought was, “Let’s remove it.”

But as I started to pull the net in, I saw a huge mahi-mahi resting in its shade. Also known as dorado or dolphinfish, the mahi-mahi (spooked by my activity) disappeared in a flash. At the same time, small crabs fell off. Barnacles held fast. Small fishes, whose home I had just taken, circled near the boat.

I realized then that I faced a dilemma: should I remove the trash, or give the creatures back their home?

The section of fishing net was large enough to entangle native Hawaiian monk seals, green sea turtles, and spinner dolphins. I felt I should remove it to protect those and similar creatures. But I recognized that doing so would kill others.

Earth stewardship isn’t easy. Sometimes we make the wrong decisions. Sometimes whatever we do has both positive and negative consequences.

One wrong decision is The Ocean Cleanup (TOC) project. The project proposes to use a nearly half-mile long, 10-foot deep mesh wall that passively drifts, gathering plastic waste as it is pushed by the wind. After a certain amount of plastic is collected, a plastic extraction ship arrives. A purse seine nets the trapped plastic for disposal. Everything over 3 mm in size is netted.

If TOC only removed garbage, I’d favor it. But it will also destroy habitat and associated marine life.

Let’s take a closer look at this two-sided issue.

I removed that piece of fishing net by hand because it was a hazard to boats and larger marine animals. Being on the spot, I could use discretion that suited the situation. But TOC’s plan doesn’t allow that discretion. It’s not manual plastic removal, which allows most creatures to escape. It will instead use purse seines with a minimum mesh size of ⅛ inch (3 mm), capable of trapping microplastics—but also an untold number and variety of sea creatures.

Because of their small size, microplastics have a lot of surface area, relative to their total mass, from which to release potential toxins. TOC’s 146-page environmental assessment references a report by The Joint Group of Experts on the Scientific Aspects of Marine Environmental Protection (GESAMP), whose 2016 reports indicate that plastics may contain toxins harmful to both humans and marine ecosystems.

However, the organization Marine Litter Solutions (referencing the same GESAMP reports) concluded: “It is not considered likely that microplastics will influence the breeding/development success of fish stocks (food security) nor represent an objective risk to human health through tap water (food safety).” GESAMP also concluded that more research is necessary.

While cleaning up trash anywhere is a good idea, the methods employed by TOC are not. Following are what I consider 3 strikes against TOC’s current plan.

Off the US East Coast, a floating seaweed known as Sargassum has been protected since 2003. Why? Because it provides homes for a variety of unique creatures, such as Sargassum fish. It’s also a nursery ground for others, including sea turtles. Mahi-mahi use it for many reasons—as a nursery ground, a hunting ground, protection, and shade, to name a few.

But Sargassum isn’t the only thing that provides those services to mahi-mahi and other marine creatures. Practically anything that floats can—including garbage.

Sargassum doesn’t grow in the Eastern Pacific, so mahi-mahi there use floating plant debris—and trash—as habitat. Recent research shows the EPGP continues to grow. And a 2018 paper in Nature estimated that almost half its trash came from commercial fishing nets, like the one I saw the giant mahi-mahi using as habitat.

Interestingly, increases in the EPGP coincide with increases in mahi-mahi catches. Eastern Pacific countries like Costa Rica, Peru, and Ecuador have had some of the biggest increases. Has the increase in floating trash resulted in increased habitat and therefore higher mahi-mahi populations? Perhaps.

The organization Fish Choice recommends avoiding mahi-mahi caught in the Eastern Pacific using purse seines around floating objects. Why? Most likely because of the significant bycatch (non-target fish and other organisms caught along with the targets) associated with this technique. Unfortunately, while TOC’s environmental assessment addresses sea turtles, it ignores all other bycatch.

Think about it: Every non-trash item TOC nets is bycatch—including mahi-mahi.

Strike Two: The Ocean Cleanup Wall is a FAD

Put an object in the open ocean and it will attract marine life. Fishermen know this, which is why Fish Aggregating Devices, or FADs, are commonly used. Hawaii has dozens, and they are merely yellow buoys with a cable anchored to the bottom.

Surprisingly, Ocean Cleanup’s team seems unsure whether a half-mile long wall on the ocean’s surface will be a FAD. It will. On its FAQ page, TOC claims the speed the wall drifts will prevent fish aggregation. But open ocean fish are used to currents, so this reasoning seems flawed.

The ocean plastic, though it’s not natural, is a habitat. But so is TOC’s wall. And when the purse seine is set, it will catch more than just plastic trash.

I won’t spend much time on it here, but a recent article in The Atlantic expertly describes the neuston—an entire ecosystem of small aquatic organisms in the surface level or moving on the surface film of water.

In addition to the neuston, a host of other species migrate vertically daily into and out of the surface layer. Surprisingly, TOC’s environmental assessment mostly ignored these ecosystems. But its mesh wall will certainly upset them.

As I write this, TOC’s wall and plastic extraction ship are anchored in Hilo, Hawaii, for repairs. Apparently, the open Pacific was more than TOC’s planners were prepared for on their first run to the EPGP. And it’s not even hurricane season.

We have many other ways to reduce plastics and clean up the ocean. Beach cleanups are one. Making a commitment to reduce your use of single-use plastics is another. If TOC put its efforts into beach cleanup and improving trash collection, or helping commercial fishermen find better ways to retrieve lost fishing gear, it could still be part of a huge global plastic-trash reduction, while avoiding the wasteful death of untold numbers of sea creatures.

It is likely populations of mahi-mahi and other creatures will drop once Ocean Cleanup’s habitat-removing system is in place. ©2016 Ellie Shormann. 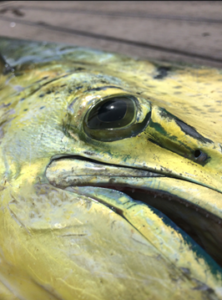 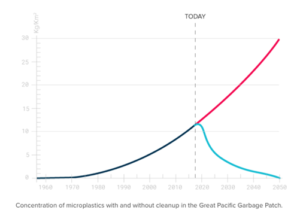 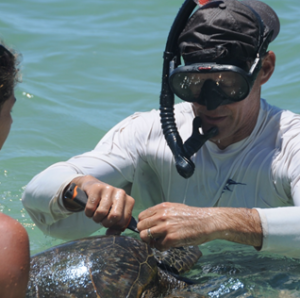 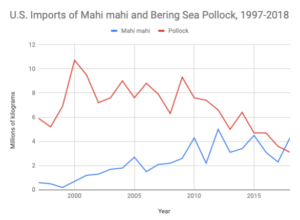 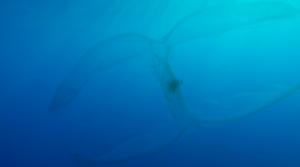 Unlike this beach, many are littered with plastic waste. If your beach doesn’t look like this, consider grabbing some garbage bags and a few friends, and help clean it up. Image ©2019 David Shormann. 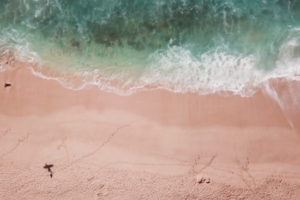